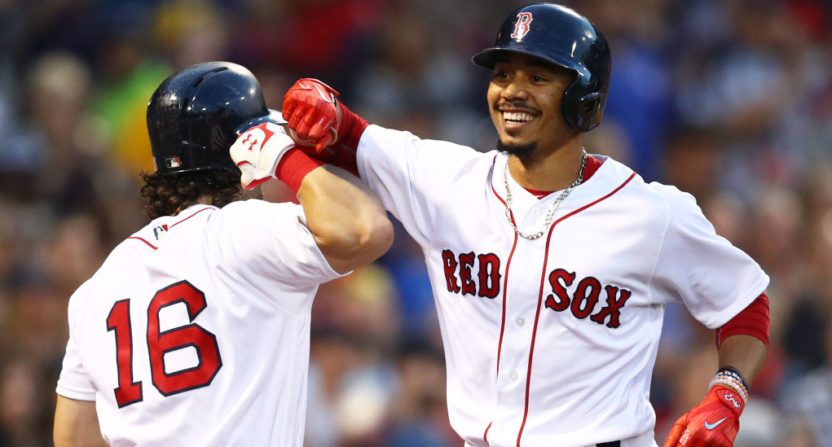 Welcome to The Comeback’s Major League Baseball playoff preview series, in which we tell you why each of the teams headed for the postseason has a chance to win it all. We have hit Clayton Kershaw and the Dodgers, Justin Verlander and the Astros, and the Nationals with the returning Bryce Harper. Today, the AL East-champion Boston Red Sox.

The North is preparing for winter. No, I’m not talking about Jon Snow and Company. This North is preparing for a much easier winter than Snow will ever encounter. This North wants nothing but to sport a ring this winter. This North is a 40-man roster playing out of Boston that’s well equipped to win the World Series before winter begins. Postseason baseball is so close, we can taste it. Here’s a breakdown of why the Red Sox may make this one of the most exciting Octobers we’ve seen in Boston since 2013.

The Red Sox lead the Majors in extra-inning wins with a 15-3 record after the ninth inning. Those 15 wins aren’t smooth, straightforward one-run differences either. Say extra-innings and we think of boring outs, lazy hitting and overall exhaustion. But the Red Sox are masters of their craft, putting pressure on teams every chance they get. Boston’s Sept. 18 game against the O’s perfectly orchestrates the kind of “no surrender” performance opponents can’t seem to crack.

Sox are closing in on having played six extra games this season via extra innings.

Boston came behind from a 6-1 deficit to beat the O’s 10-8 in 11 innings. Thanks in part to a rough outing by Doug Fister, the Red Sox found themselves in a five-run hole by the third inning, when their win probability was merely five percent. They marched back in the fifth with a six-run frame, highlighted by RBIs from Mookie Betts and Jackie Bradley Jr. to take the lead, 7-6. Baltimore posted two more runs in the bottom of the inning and blanked the Sox for the remainder of the game. Boston, by now on its 17th extra-inning game of the year, put a runner in scoring position in the 11th and never looked back.

Three nights prior, Boston trailed Tampa Bay 5-2 in the ninth, and went on to win 13-6 in 15 innings. This never-give-up mentality trickles down to individual performance. Bradley expertly battled through a nine-pitch at-bat during Boston’s 11-inning comeback over the O’s. And with battle comes…

Gritty gamers (or ballers, if you will)

Dustin Pedroia is 0-8 tonight but he just made a baseball art film pic.twitter.com/JkrX2LzeS8

In the David Ortiz era, it was almost expected to play with maximum effort at all times. Big Papi represented grit and threat, and his performance had a ripple effect in the clubhouse. In his absence, Dustin Pedroia maintains the leadership role for Boston. If younger athletes like Andrew Benintendi, Betts (who we often forget is only 24 years old, though impressively in his fourth season) and Rafael Devers follow in Pedroia’s footsteps, the squad will soon mold into a tenacious, ruthless machine.

Think of every Pedroia at-bat. He’s pesky at the plate, fouling off balls for long at-bats, finding a way to get on base or simply move runners up. He gives his all no matter the score or the opponent. While some squads are running out of gas, as a 162-game workload often demands, the Red Sox appear immune to a collapse. As hot as the Yankees are right now, not even Aaron Judge’s barrel or Aroldis Chapman’s heater can catch up to their irksome rivals. Rather than disintegrating, Boston is playing some of its best baseball as the regular season culminates.

David Price… in the bullpen

If in April you guessed David Price would land in the bullpen by September, I would have hardcore questioned your baseball judgment. Turns out, I would have been wrong. Price is indeed only one asset in Boston’s cohesive, near-perfect bullpen built by Dave Dombrowski. The depth of Craig Kimbrel, Brandon Workman, Robby Scott, Matt Barnes, Joe Kelly and Price allows the Red Sox to hold leads and come back from major deficits. After the Indians, the Red Sox bullpen has the lowest ERA (3.03) in the league.

Often in the playoffs, teams seeking to secure early motivation better hope their rotation is rested, primed and ready to pitch at least six frames on that hill every single day. But if that’s not cutting it, a bullpen that consistently fires 90-mph heaters will do just fine. Price has a little over four innings under his belt as a reliever, in which he gave up three hits and walked one with six strikeouts. Though the modified Price is surely a boon in the ‘pen, Kimbrel owns the Majors’ best strikeout rate as a reliever in 2017. He’s punching out more than 50 percent of the batters he’s facing and no other pitcher has matched that rate since 2003. Piggyback Price and Kimbrel in the postseason and batters are sure to be nervous at the plate before a pitch is even thrown.