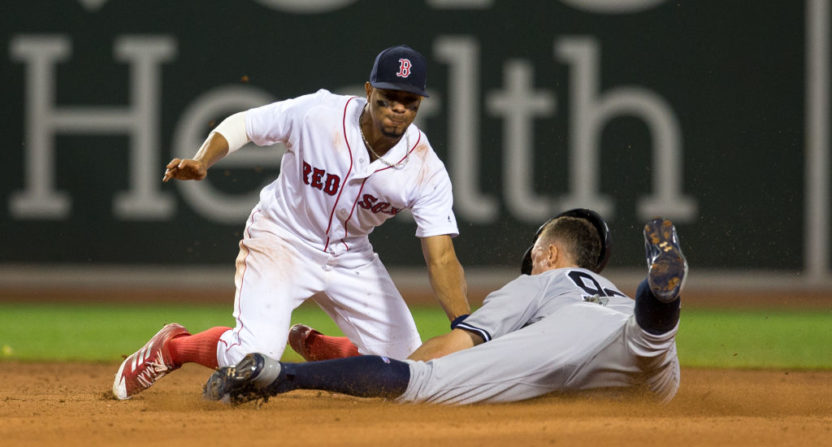 I think we can all agree that it’s been six years.

A spark, a buzz, a hum. It’s been six years that all three have been missing from the Yankees-Red Sox rivalry. Not missing in a way that we were putting up signs, offering rewards for finding them. No, the rivalry was dwindling in a more acceptable manner. Almost like we were ready to move on, take a break, see what else is out there. We entertained the idea that the rivalry had run its course. We looked to other division match ups to fill our void. The Dodgers and the Giants? Nah, not the same. Astros and Rangers? Nope, still lacking. Cubs and Cards? Not this year.

Something, anything, kept bringing us back to the Yankees and the Red Sox. While the media continued to tout the rivalry out of habit for the past six years, it wasn’t clicking. Then, David Ortiz played his final game at Yankee Stadium — complete with a ceremony, gift, and weirdest of all, cheers. Even Ortiz wasn’t sure whether he’d get boos or claps in that final game. He expected the former. Why? The rivalry. So when Big Papi signed off, so did we.

Key moments that sparked the revival of a rivalry:

2. Aug. 11: Aaron Hicks’ two-run homer in the 8th, leading to a comeback win for Yankees

3. July 16: Bradley Jr. extending his arm over the wall, robbing Judge of a two-run homer in the 8th

4. July 15: Holliday’s game-tying jack over the Red Monster against Craig Kimbrel in the 9th

Things that don’t necessarily have a date:

1) David Price arguing with Boston media and naturally stirring excitement in New York fans. Price flooded New York radio talk shows for weeks straight, causing the Yankees’ media to reflect on their own bullish questioning. We compared and contrasted not just the two rival teams, but the similarities between Boston and New York media as well.

2) The promise of young stars growing in talent and performing well throughout the rivalry. Clint Frazier, Andrew Benintendi, Sanchez, Devers and Judge are all here to stay until at least 2019. These fresh faces are giving us the spark, hum and buzz back to the rivalry not just this season, but at least a few more years to come.

From 2003 to 2011, the Yankees and Red Sox kept each other in check. They finished first and second in the American League East for five out of those nine years. Out of those five years, the Red Sox came out on top only in 2007, when the Yankees finished just two games back. Their largest margin came in 2009, the Red Sox finishing eight games behind the Bronx Bombers. And their smallest in 2005, the squads finishing in a 95-67 tie.

Now, the teams are battling yet again. In the 12 games they’ve played this season, nine have been decided by three runs or less. Take away the Yankees’ eerily offensive June when they were slugging .276/.353/.477 with 47 homers in 28 games, and it’d be even closer. Throw in aces Chris Sale and Luis Severino and watch the drama hype back up.

Following all those fun moments that literally revived the rivalry, the Yankees head to Fenway Park four games behind the AL East-leading Red Sox. Both teams yearn for the division title and, as of now, it’s up for grabs. They’re set to face one another seven more times. Based on what we’ve seen so far, we can expect most of those square offs to be close. Break out the popcorn. Settle in, get comfy. And watch the rivalry reignite before our eyes.