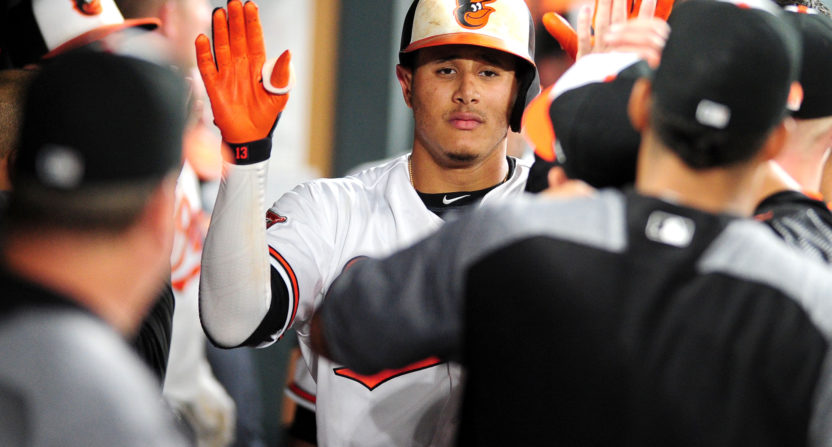 Orioles third baseman Manny Machado is reportedly on the trading block, and although Baltimore seems to be wobbling in its desire to deal their star, there’s a lot of offseason left, and the O’s have plenty of reason to pull the trigger.

We asked our writers where Machado might wind up. Here are their answers:

Where will Manny Machado be playing on Opening Day?

Matt Clapp:  I’ll go with the boring answer: the Orioles. There would seem to be a very good chance he’s traded, and I’d say it’s a near-lock he’s dealt before the July 31 trade deadline.

But right now, there aren’t any completely obvious fits. You could argue the Cardinals, but you could also argue that it’s not in their best interest to give up premium prospects to rent a player that may not even make them better than the Cubs in the NL Central (though they’d certainly be a Wild-Card favorite at the very least). And speaking of the Cubs, they have been mentioned as being in talks for Machado, but it’s hard to see them giving up four years of a player like Addison Russell (suggested as a potential target by national writers) for one year of Machado. The Yankees would certainly make sense… but Peter Angelos won’t let that happen.

You then hear teams like the White Sox and Phillies mentioned, but these teams are at least a year away from contention (the White Sox are especially not close). They should go after Machado next offseason, but why give up young talent when you’re rebuilding, for a guy that may just take the biggest offer anyway?

So the safest call right now is the Orioles, and they will still get big offers for Machado in-season. A team like the Cardinals or Diamondbacks may have a better idea if it’s worth going for it when the summer comes around, or maybe an injury happens to another star player on one of the juggernaut teams.

Joe Lucia:  Baltimore. I can’t remember the last time Peter Angelos let his front office deal a popular, talented player when the team actually needed to. He’s not going to start now, even though Baltimore finished in last place with 87 losses last year.

Alex Putterman: Zach Britton’s injury made me consider for a moment that Baltimore might embrace the rebuild it needs. But in the end, that’s just not this team’s style. The Orioles are going to hold on to Machado and cross their fingers for one more run at the postseason.

But to avoid a total copout answer, I’ll say that although Machado will begin the season with the Orioles, he’ll wind up in the Bronx by August 1. The trade market for Machado seems (justifiably) undercut by teams’ fear that he’ll just sign with the Yankees in 2019 anyway, so it figures that the Yankees, who will likely enter the season with room at third base, will be the ones to pull the trigger on a trade. If Brian Cashman finds his team in a close race, he might be inclined to pursue Machado a few months early.

Ian Casselberry:  This isn’t really answering the question, but the Orioles should trade Manny Machado to the Mets.

Baltimore needs to get what it can for Machado before he hits free agency and the window (maybe more of a crack) for this team closes. (Zach Britton, injury recovery pending, and Adam Jones are also eligible for the open market.) The Mets are enduring heavy criticism for ownership reducing payroll and general manager Sandy Alderson (who just got a contract extension) not making any improvements to the roster. With one move, the team can quiet all of that talk. The Mets need a superstar hitter to pair with Yoenis Cespedes and getting a third baseman would make the transition from the David Wright era complete. (If Machado wants to play shortstop, maybe that’s an obstacle. Presumably, Amed Rosario at the position makes staying at third base more palatable.)

The Mets also have the young pitching that Baltimore is seeking in a trade. Ideally, neither Noah Syndergaard or Jacob deGrom is part of a deal. But if it means getting Machado (even with the risk of it being a one-year stint), building a package around deGrom and top prospect Andres Gimenez would be worth it. Maybe Alderson can also make the argument that Matt Harvey and Steven Matz are equivalent to one more top-flight young starter. If the Orioles want a hitter, Brandon Nimmo or Dom Smith could be substituted for one of the pitchers.

That’s a lot to give up for a player who could become a free agent and want a contract out of the Mets’ price range. But the team has one year to sell Machado on playing in New York and perhaps accept that a superstar player still in his mid-20s is worth a blockbuster contract that would appease fans and media, and put them in position to make a run at the NL East after the Nationals’ run is over.