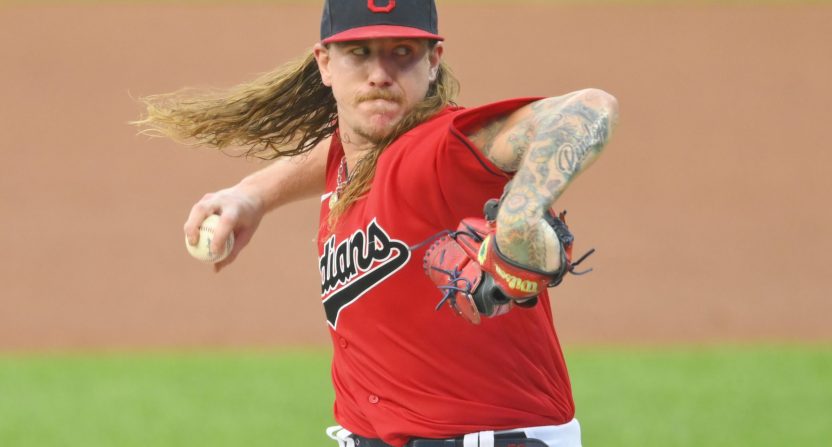 The 2020 MLB trade deadline has come and gone, and while there weren’t many household names moved (I’d say the most significant player dealt over the last few days is Indians starter Mike Clevinger, traded to the Padres), it was still a significant deadline day for many teams across the league.

San Diego Padres
At the start of action on Monday morning, Padres catchers were slashing .142/.227/.283 with four home runs, better than just five teams across the league. GM AJ Preller completely upgraded his team’s offense behind the plate, acquiring Austin Nola (.306/.373/.531 with five homers) from the Mariners and Jason Castro (.192/.323/.385 with two homers, though in just 18 games) from the Angels. Along with Nola, the package from the Mariners included relievers Austin Adams and Dan Altavilla, while the package going to Seattle included prospects Taylor Trammell and Andres Munoz, third-string catcher Luis Torrens, and infielder Ty France. This trade makes the Padres better today and shouldn’t hurt them all that much in the future, though Trammell has been a highly touted prospect since he was initially drafted by the Reds in 2016.

But the big deal was the nine-player whopper that Preller swung on Monday morning, bringing starter Mike Clevinger over from the Cleveland Indians. The 29-year old Clevinger has a 3.18 ERA over four starts this year, and has a 3.20 mark across his 101 MLB games. He’s averaged over a strikeout per inning in his career, and will slot nicely into a rotation that has largely struggled behind Dinelson Lamet and Zach Davies. The package to acquire Clevinger wasn’t cheap – it cost the Padres 23-year old outfielder Josh Naylor (.253/.315/.405 in 112 career MLB games), catcher Austin Hedges (who was surplus thanks to the acquisitions of Nola and Castro), pitcher Cal Quantrill (4.79 ERA in 120 1/3 career MLB innings), and a trio of prospects that rank outside of MLB’s Top 100.

San Diego also made a pair of minor deals before the stove got truly hot, adding first baseman Mitch Moreland from the Red Sox and reliever Trevor Rosenthal from the Royals. At the deadline this year, the Padres managed to improve their rotation, dramatically upgrade their offense at catcher, slightly beef up their injury-laden bullpen (Emilio Pagan, and closer Kirby Yates are both out for the year, while Drew Pomeranz is on the IL with a shoulder strain and Quantrill was shipped to Cleveland in the Clevinger deal), and even improve their bench depth. San Diego isn’t as good as the Dodgers in the NL West, but I don’t think it’s a stretch to say they might be the second-best team in the National League.

Seattle Mariners
While the Mariners couldn’t trade Kyle Seager and his contract, they did trade Taijuan Walker to the Blue Jays (covered below) and Austin Nola (and others) to the Padres (covered above). Seattle didn’t become better over the trade deadline, but I think they’re big winners for extracting whatever value they could from Toronto and San Diego.

Consider this: Walker was released by the Diamondbacks in December and signed with the Mariners in February. After just five starts, Seattle was able to get some value in exchange for that modest investment. Reliever Austin Adams, sent to the Padres in that deal, was acquired from the Nationals last May, hasn’t pitched at all in 2020, and threw 31 innings last season for the Mariners. Reliever Dan Altavilla, also part of that Padres trade, was a fifth round pick in 2014 about to head into arbitration with a career 4.08 ERA in 106 innings. Austin Nola will be 31 in December, and while he’s mashed in his 108 career games at the MLB level, he was signed as a minor league free agent prior to the 2019 season.

None of these players traded by the Mariners received a significant investment from the team in either time nor money. None were future building blocks. In return, they received a potential regular catcher in Luis Torrens, a guy who has mashed this season for the Padres in Ty France (.309/.377/.491 in 20 games), a fine lottery ticket reliever in Andres Munoz, and a top 100 prospect in Taylor Trammell. If you’re a Mariners fan, what more could you ask for?

Toronto Blue Jays
Hey, did you know that the Blue Jays are a playoff team? Right now, they are! Toronto is 18-14, a game behind the Yankees for second place in the AL East and a game and a half pack of the Twins for the first Wild Card (or whatever we’re calling the last two playoff spots in each league) in the AL. The Jays made some sneaky good moves at the deadline, bringing in Robbie Ray from the Diamondbacks, Taijuan Walker from the Mariners, Ross Stripling from the Dodgers, and Jonathan Villar from the Marlins. Furthermore, those four players didn’t exactly cost Toronto much in terms of prospect capital: Villar was acquired for Griffin Conine (yes, Jeff’s son), who was not among the team’s top prospects. The cost for Ray was Travis Bergen, who spent a chunk of 2019 with the Giants as a Rule 5 pick. Walker came over for a player to be named later, while Stripling’s cost was two players to be named later.

Walker threw six scoreless innings for Toronto in his first start with the team on Saturday, though he had an ERA of 4.00 in five starts with the Mariners prior to the deal and tossed a total of 14 innings in 2018 and 2019 with the Diamondbacks. Ray has a 7.84 ERA in 31 innings with the Diamondbacks this year, walking a ghastly 31 while striking out 43. Stripling’s ERA this year is an unsightly 5.61, but he kept it under 4.00 in each of his first four years with the Dodgers. Villar has slashed .272/.328/.360 and stolen nine bases (while being caught five times) with the Marlins this year.

Starting pitching is what Toronto needs most. The rotation has been disappointing past the excellent Hyun-Jin Ryu (2.92 ERA in seven starts), with veterans Matt Shoemaker and Tanner Roark struggling and prospect Nate Pearson looking not ready for the big time. Further compounding the situation is the injuries suffered by Shoemaker, Pearson, and Trent Thornton, forcing the Blue Jays into even more of a corner. Even if Ray, Stripling, and Walker aren’t stars, they’re healthy and have the ability to be productive. A rotation of those three, Ryu, former Brewer Chase Anderson, and Roark won’t light the world on fire, but it will get the job done and could be enough to nudge Toronto into the playoffs without expending any prospect capital.

Arizona Diamondbacks
Arizona waited too long to trade Ray, and got next to nothing for him. Less than a year after trading for Starling Marte, they moved on from him (despite Marte’s production this year and a somewhat reasonable club option for next year) and sent him to the Marlins for a disappointing package (prospects Julio Frias and Humbero Mejia, and starter Caleb Smith). They also dealt closer Archie Bradley to the Reds for Josh VanMeter (.214/.305/.378 career line with nine homers in 109 games) and Stuart Fairchild (Cincinnati’s second round pick in 2017).

The Diamondbacks are losers because they half-assed their trade deadline, just as they’ve half-assed their last three offseasons. The team won 93 games and the NL Wild Card game back in 2017, but did nothing to improve the team going into 2018 before missing the playoffs by eight games. Going into 2019, they traded franchise cornerstone Paul Goldschmidt, did nothing else to significantly improve or damage the team, and missed the playoffs by four games after trading Zack Greinke and acquiring Mike Leake at the deadline. This offseason, they signed Madison Bumgarner and Kole Calhoun, traded for Marte, stopped right there, and are in the basement of the NL West.

If Arizona had a clearer plan after the 2017 playoff run, maybe they could have sold higher on Ray and Bradley instead of selling low on the pair this year. Instead of keeping guys like Escobar, David Peralta, and Calhoun, who will hit free agency after either the 2021 or 2022 season and are on the wrong side of 30, maybe they should have tried to extract value from teams for those guys. Instead, they hung on to them, and Arizona’s future looks cloudier than ever. Now, just wait until next summer, when the Diamondbacks sell low on those three.

Atlanta Braves
The Braves needed a starting pitcher pretty badly. They got well-traveled veteran Tommy Milone from the Orioles. Milone recorded as many outs as runs allowed in his first start with the Braves on Sunday night, a wild 12-10 win over the Phillies.

The Braves still need a starting pitcher pretty badly. It appears they’ll rely on internal options to fill the gaping crevasse behind Max Fried, but that hasn’t worked very well up to this point – they’ve used 11 starters (including Fried) this year, and only Fried, top prospect Ian Anderson (who has made one start), and Mike Soroka (out for the year with a torn Achilles) have ERAs under 4.00. Atlanta’s bullpen is excellent, but among NL teams, only the Dodgers (who have played three more games) have gotten more innings out of their relief corps than Atlanta. That can’t last throughout September and into the Postseason, and the Braves’ failure to bolster their rotation (despite an incredible supply of prospects to deal from) could prove costly come October.

Texas Rangers
I’m not going to give the Rangers a hard time for not trading Joey Gallo. Those rumors were really only percolating for the final 24 hours or so of the trade deadline madness. But I cannot believe Texas didn’t trade Lance Lynn, a 33-year old coming off a fantastic year, having another great year, with another year of control left, in a market where nearly every team in baseball needs starting pitching. It’s inexplicable. Texas is one of the worst teams in baseball, they had one of the most prized assets in baseball at this year’s deadline, and they did nothing with him. It boggles the mind.

The Rangers did trade starter Mike Minor to the A’s, but they moved him a year late. Last season, Minor was in the midst of a career season, and he was still under contract for the 2020 season. He didn’t get dealt at the deadline, and Texas finished six games under .500. This year, Minor’s performance regressed, and with just one month until free agency, the package the Rangers got for him from the Athletics was considerably lighter (just two players to be named later) than it would have been in the summer of 2019. Will we see the same situation unfold with Lynn next summer?