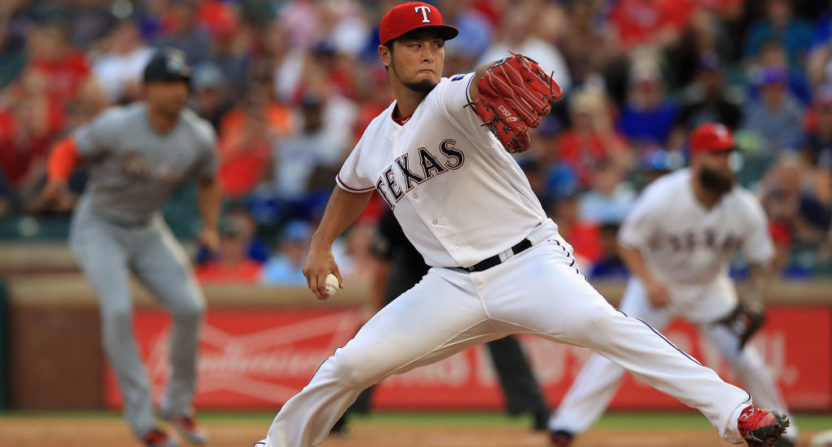 Even if Monday’s MLB Trade Deadline day was a bit on the quiet side, the month leading up to it certainly wasn’t. From the moment the Chicago Cubs acquired crosstown ace Jose Quintana on July 13, deals arrived steadily, with dozens of players changing teams and several divisional races getting makeovers.

The trade frenzy culminated Monday in two substantial blockbusters and a series of smaller exchanges. To make sense of all the movement, we’ve picked the biggest winners and the three biggest losers from the month of July.

The Yankees could make these moves because their farm system was overflowing with desirable young players. Most organizations would be gutted after giving up Chase Rutherford, Jorge Mateo, Dustin Fowler and James Kaprielian in a single month, but the Yankees will hardly notice. They’ve got talented young players already in the Majors, with more on the way in the high minors, leaving some awfully good pieces expendable. Credit to Brian Cashman for upgrading his Major-League roster at four different spots by giving away players whose paths to the Majors were mostly blocked anyway.

Even better, the Yankees came away with players who can help the team beyond 2017. Gray is under team control through 2019, Kahnle through 2020 and Robertson through 2019. New York’s current roster has few holes, and its future rosters are coming together perfectly. Last July, the Yankees began a rebuilding process. This July they more or less completed it.

Given that the Dodgers are currently 74-31 and 14 games up in the NL West, it’s tempting to say they didn’t need Yu Darvish. But the decision to acquire him from Texas on Monday was clearly geared toward getting L.A. over the playoff hump and into the World Series, and you can never have too much fire-power in October. Even if Clayton Kershaw’s back remains a problem into the postseason, the Dodgers’ rotation of Darvish, Alex Wood, Rich Hill and Brandon McCarthy looks awfully solid. If Kershaw is healthy, their rotation of Kershaw, Darvish, Wood and Hill could be the best in the league.

L.A. also acquired lefty relievers Tony Watson and Tony Cingrani on Monday, and although neither is a game-changer, both add a little depth to an already strong bullpen.

Like the Yankees, the Dodgers improved their roster without dealing their top prospects, Alex Verdugo, Walker Buehler and Yadier Alvarez. The rich keep getting richer.

The Dodgers’ trade partner in the Darvish deal also had a good deadline.

With the Rangers on the fringes of the playoff race, they faced a difficult decision whether to trade their longtime ace, only months before he was to hit free agency. Ultimately, they made the right call, getting prospects Willie Calhoun, A.J. Alexy and Brendon Davis in return for a guy whom they could very well sign again in the winter.

It would have been foolish for Texas (currently five and a half back in the wild-card race) to chase a remote chance at half a playoff spot. Instead, they dealt Darvish (and struggling reliever Jeremy Jeffress) but held on to everyone under contract long-term, setting themselves up to compete in 2018 and beyond.

The Royals were quiet on deadline day but made some shrewd moves leading up to July 31. Without giving up much of value, they added a passable fifth starter (Trevor Cahill), a much-needed corner outfielder (Melky Cabrera) and two solid relievers (Ryan Buchter and Brandon Maurer).

Sure Cabrera, Cahill, Maurer and Buchter aren’t big stars, but they all provide upgrades over what the Royals had in house. For a team hanging onto a wild-card spot with two months to play, marginal, low-cost improvements were exactly what the doctor ordered.

More than maybe any other team in baseball, Kansas City has incentives to go for broke this year. Once the season ends, Eric Hosmer, Mike Moustakas, Lorenzo Cain and Jason Vargas hit free agency, and the core of the 2015 World Series-winning roster dissipates forever. This is the Royals’ last chance, and they showed this month they don’t plan to waste it.

New York’s NL team made two trades this week: They acquired Marlins reliever A.J. Ramos, who remains under contract for next season, and they jettisoned closer Addison Reed, who’s gone after this year. Neither deal was egregious—though chasing Ramos amid a frenzied reliever market seemed a bit gratuitous—but was what the Mets didn’t do that made them losers this July.

The Mets have next to no chance of making the playoffs. They are 48-55, 14 games back in their division and 10.5 games back in the wild-card race. Clearly, the deadline was time to punt on 2017 and either gear up for next year or break everything down and rebuild entirely.

So with that in mind, it’s hard to figure out why Curtis Granderson, Jay Bruce and Neil Walker—all free agents after this season—remain in Mets uniforms. Sure, more teams sought pitchers than position players this year, but the Royals, Diamondbacks, Rockies, Rays or Mariners likely would have had some interest in a bat. Even if the return wasn’t going to be great on any of their veterans, the Mets should have shopped Bruce and Granderson aggressively if only to clear playing time for the ascendant Michael Conforto.

Instead, for some reason, they sat on their hands.

So although Boston improved this month, they rank as losers for having watched their chief rival improve even more. Boston’s failure to find a third baseman actually capable of manning third (look up Nunez’s defensive stats if you dare) particularly hurts.

The uber-talented Red Sox still have a great chance to beat the Yankees in the AL East, but they may have officially lost their favorite status.

While most of the league’s sub-.500 teams traded relief pitchers rapid-fire, the Padres clung to lefty Brad Hand as if her were Andrew Miller crossed with Mariano Rivera.

Yes, Hand is good (2.00 ERA, 2.52 FIP), but San Diego reportedly asked the world for a 27-year-old having a career year, whose value might never be higher. Trading him to a reliever-hungry contending team seemed like an obvious move, especially if they could get a top-100 prospect in return, but the Padres balked.

After off-loading Maurer, Buchter and Cahill for some vaguely interesting pieces, San Diego stubbornly held its ground when it came to the organization’s best trade chip. Now Hand is destined to pitch out this season on a last-place team that is barely closer to contention that it was entering July.