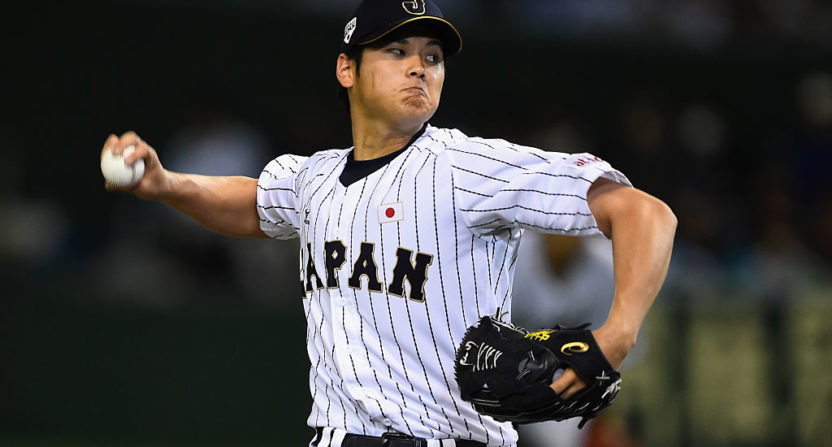 After a long and drawn-out sweepstakes with enough twists to fill a soap opera, Shohei Ohtani has finally chosen a home. The Japanese pitching-hitting sensation announced Friday he will sign with the Los Angeles Angels, joining Mike Trout and company on a team that now looks like a serious playoff contender.

With so many teams having put time, effort and money into pursuing Ohtani, his decision will have ripples across the league. Here are the winners and losers of Friday’s big news.

Even throughout Ohtani-mania, it was easy to lose sight of just how much of a bargain this 23-year-old future All-Star is. On an open market, he would have made nine figures, maybe more than $200 million. The Angels get him for a $20 million posting fee, less than $3 million in signing bonus and the Major-League minimum salary.

We can worry later about how much Ohtani will hit and how effectively he will pitch. For now, the bottom line is that the Angels got a potential superstar for the cost, in total, of a middle reliever. For a team that narrowly missed the playoffs last year, that is excellent news. Halos fans have much reason for excitement.

This stings for every team that missed out on Ohtani, especially those that were finalists, but it’s particularly brutal for the Mariners. Seattle hasn’t made the playoffs since 2001 and could have really used a youthful boost to an aging roster. To entice Ohtani, the Angels dealt a solid prospect to Minnesota for extra international slot money, then sent more young players to Miami to get another million dollars of cash they could use on Ohtani (in the deal that brought them Dee Gordon).

But instead of landing Ohtani, the Mariners watched the phenom sign with a division rival against whom they will compete for a playoff spot in 2018. The silver lining for Seattle is that general manager Jerry Dipoto now has more than $3 million to spend in the international market. But of course, no one the Mariners sign with that money can be expected to provide the value Ohtani figures to produce. This is a brutal day for Seattle and its fans.

A live look-in at @minakimes reacting to the Ohtani news #HotStoveKewlKimes pic.twitter.com/pvAbDFVcNl

Through his first six big-league seasons, Mike Trout has performed like one of the greatest players ever. And in that time, he has played in a total of three postseason games, all in a 2014 ALDS sweep at the hands of the Royals.

The Angels’ failure to win over the past three years has nothing to do with Trout and everything to do with a mediocre roster around him. That said, things began to turn around in 2017 with Andrelton Simmons’ breakout, the pitching staff’s quiet competence and Justin Upton’s arrival. With Ohtani onboard, Trout appears that much more likely to reach the playoffs a couple times before his contract expires after the 2020 season. That’s great news for him and for anyone who wants to see him playing big games in October.

Pujols is an all-time great, but he sure looked cooked in 2017, hitting an awful .241/.286/.386 while serving mostly as DH and running as if he had an anchor tied to his ankle. And although we don’t know how exactly the Angels will use Ohtani, Pujols figures to be the guy whose playing time suffers most.

If the Angels slot Ohtani at DH, say, three times a week, they’ll be forced to either play Pujols at first base (where he appeared only six times in 2017) or leave the future Hall of Famer on the bench. Given that C.J. Cron is a much better option defensively and a comparable one offensively, the Angels might be best off sitting Pujols on days Ohtani bats. If healthy, Pujols will still play plenty, but his days as a regular might be over.

It sounds corny, but the big winners in Ohtani’s signing are the baseball fans who will get to watch a brilliant player attempt to both pitch and hit regularly, something no one else has pulled off in a century. His performance will be a dominant storyline throughout 2018, the type you’ll talk about every morning at the water cooler. Whatever Ohtani does, he’ll do on a roster that already features the best player in the game in Trout, as well as a historically incredible defensive shortstop in Simmons. Having all three of those guys on one team is almost too good to be true. April can’t come soon enough.