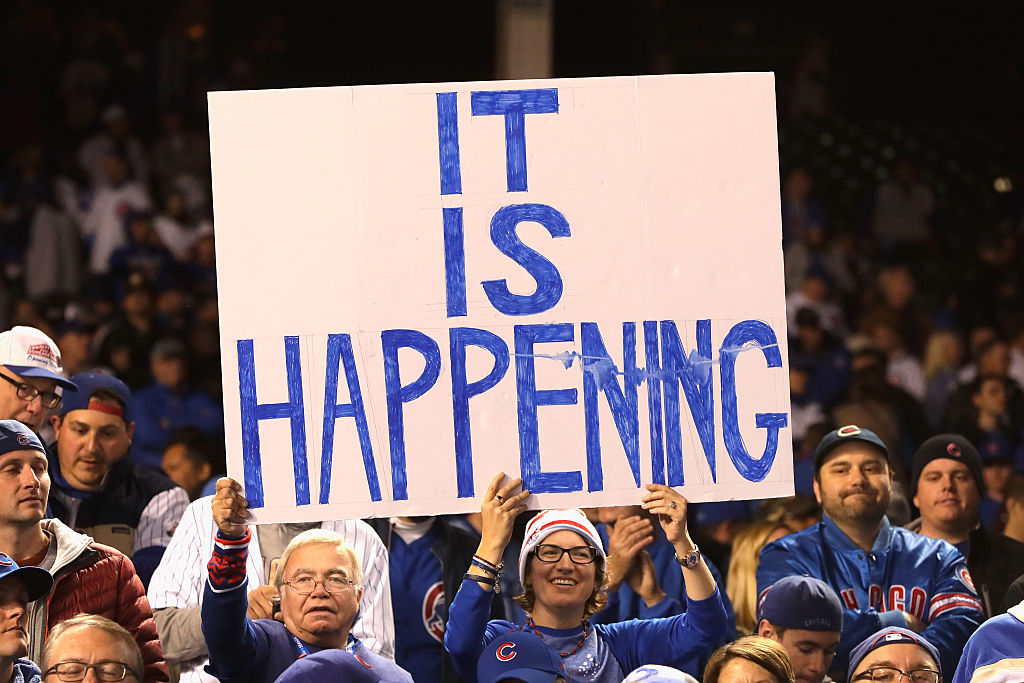 The narratives are all over the place. The Indians haven’t won a World Series since 1948 and haven’t been there since 1997. The Cubs have an even longer history of non-relevance going back to their last World Series appearance in 1945 and last win in 1908. We know for sure that one of the two longest ringless streaks will end within the next seven games of the 2016 season.

But how bad is it really? Last season, I took a look at the odds of each team winning the pennant every season that the World Series existed to see how many each team should have won in their franchise history. Of course, the Cubs and Indians were among the worst in World Series wins, but that is not necessarily the case in World Series appearances. Both teams have existed for the duration of the Series and should have had about 12 league pennants, all things being equal. The Cubs, in fact, have exactly 12, but the Indians have just five. All things being equal, they both should have won about half of those, but this is where the real dismal news appears, as both have exactly two.

The drought is much longer for the Cubs as they won in 1907 and 1908, while the Indians were able to have two generations see a title in their lifetimes, as they won in 1920 and 1948. Here’s a look at how we got to this point with both teams.

In addition to their back-to-back World Championships, the Cubs were a solid franchise through 1918, when they lost the World Series in six games to the Red Sox, who won their last championship until 2004. It was already their fifth trip to the World Series out of the first 15 and they finished second in the eight team National League in two other seasons. After the 1918 loss, it would take a decade before the Cubs were good enough to compete again.

After becoming an original member of the expansion American League in 1901, it took the Indians 20 years just to get to the World Series for the first time. Aided by the Chicago Black Sox scandal of 1919 that helped them clinch the pennant when multiple integral players from the second-place Sox were banned from baseball, the Indians took out the Brooklyn Bridegrooms in seven games during the best of nine series. While this was largely the same team from about 1918 through the mid-1920s, other than the three second place finishes around the pennant-winning 1920 season (1918, 1919, and 1921), the team wouldn’t seriously compete for the crown again.

While the Indians were consistently coming in fourth in the eight-team AL during the 1930s, the Cubs were the talk of the NL. They returned to the World Series in 1929, then went back in 1932, 1935 and 1938. Unfortunately for the Cubs, the Yankees really became the Yankees in the mid-1920s and didn’t back down until the mid-1960s. In 1929, it was the Athletics and 1935 the Tigers who won, but there is no question that the two series against New York were the most indicative of how greatly overmatched the Cubs were. In those two series, the Cubs were outscored 59 to 28, never finished a game within a run of New York and were blown out by at least five in three separate games.

Lou Gehrig and Babe Ruth lead the charge in the 1932 series, but Ruth was retired in 1938 and Gehrig didn’t knock in a run. It was a more balanced approach offensively and they didn’t score as much as in the first one, but Joe DiMaggio, Bill Dickey, and Frankie Crosetti were still able to completely demolish the North Siders.

The Cubs would return to the World Series in 1945 with a 98-win season and even stretched the series to seven games. They started things out with a big win, knocking out Hall of Famer Hal Newhouser in a 9-0 win, and Claude Passeu pitched the Cubs second complete game shutout in Game 3. But in a Game 1 rematch between Newhouser and Hank Bowery, the Tigers came away victorious with a 9-3 win, the Cubs’ last World Series game until tonight.

Before the Indians were demolished by “Trader” Frank Lane in the late 1950s, they were a juggernaut. Filled with Hall of Famers, particularly in a pitching rotation led by Bob Feller, they won the pennant and the World Series in 1948, and finished second every year from 1951 through 1956. The exception was 1954, when they broke the Yankees’ run of what otherwise would have been 10 straight years of AL pennants from 1949 through 1958. In fact, just like later in the 1990s, it was either Yankees or Indians in the World Series for the AL for quite a while and just like the more recent edition, that meant mostly New York. From 1947 through 1964, with the exception of a White Sox World Series loss in 1959, it was New York or Cleveland.

After winning in 1948, they returned to the greatest stage in 1954 and did so with authority, winning a record 111 games to beat out the Yankees, who won 103 themselves. On the backs of 1953 MVP Al Rosen and Hall of Famers Larry Doby, Early Wynn, and Bob Lemon, it was expected to be a rout against the NL champion New York Giants, but the opposite happened. While it looked like the Indians would win Game 1 until Willie Mays made the only catch known as “the catch” in baseball history, they never came close again. When Lane traded off the team in subsequent seasons, including Rookie of the Year Herb Score and slugger Rocky Colavito, their hopes were dashed for 40 years.

From 1946 through 1966, the Cubs didn’t just not compete, they never finished above fifth. Once divisional play came around in 1969, more playoff opportunities arose, but the Cubs were unable to break through in the NL East until 1984, when they lost 3-2 in the NLCS against the Padres, and 1989, when they lost 4-1 to the Giants. While Mark Grace and Ryne Sandberg performed masterfully, they were just not enough to prop up the rest of the offense, and the Cubs couldn’t keep the Giants offense at bay, as they scored 27 runs in the first four games.

From 1960 on for the Tribe, there wasn’t even the occasional playoff appearance to keep spirits up. In fact, they never even came close to winning the AL East during their entire tenure in that division. A third-place finish in 1968 was the only season that differed from 33 straight years finishing fourth or worse from 1960 through 1993.

John Hart turned around the Indians in the late 1980s, and by signing all his future stars to extensions in the early 1990s, he was able to keep his big guns around for most of the decade. This started the years as a powerhouse for the Tribe, featuring Albert Belle, Jim Thome, and Manny Ramirez as they went to the World Series in 1995 and 1997 and won each of the first five Central division titles. They won the Central again in 2001, but were quickly ousted by the Seattle team that broke the 1954 Indians’ win record, and won a seventh time in 2007, but were knocked out in the ALCS despite being up three games to one against Boston.

Cubs fans know something about being up 3-1 in the league championship round as well. No one will ever forget the 2003 series where Steve Bartman “robbed” Moises Alou on a ball in foul territory in Game 6, but the Cubs only had to win either Game 6 or Game 7 and couldn’t do either. At least the Marlins were able to beat the Yankees in the World Series that year, the last year of Yankee dominance in the AL after either they or Cleveland had been the AL representative every year from 1995 through 2003, with the exception of the Angels in 2002.

A curse will be broken within the coming days. The Cubs have waited longer, but the Indians haven’t had as many chances. In both cases, the vast majority of living fans for either team have never seen their baseball franchise win a world title. Not only will this change after this series, but both teams are extremely young and have their stars under control for an extended period. This could just be the first of a long run as these two desolate franchises become the pinnacle of their respective leagues.