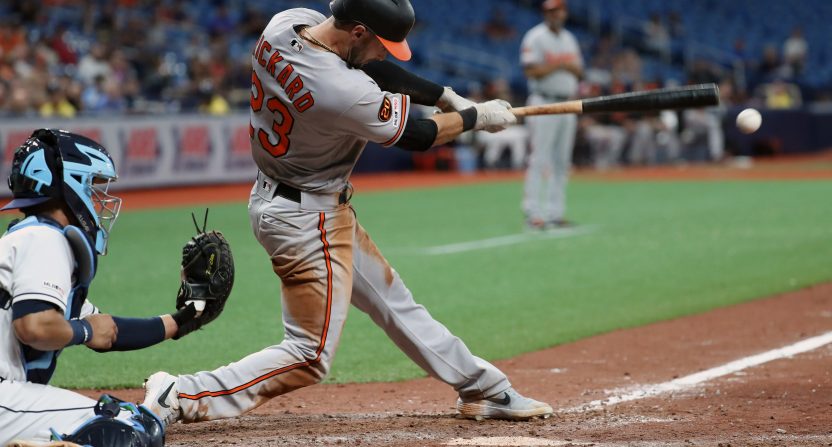 The Baltimore Orioles are a train wreck. They’re 22-58, with losses in 13 of their last 14 games. They’re 30 games back in the AL East. They’re far and away the worst team in MLB.

The Tampa Bay Rays — while having a very good 46-35 record that would currently place them in the AL Wild Card game — are in a messy situation after owner Stu Sternberg recently announced a plan for the organization to split seasons between Tampa Bay and Montreal.

And Tropicana Field is a dump. The Rays average 14,545 fans at home games, second-worst in the majors. We can also assume the fan support will lower with the Montreal news.

Add all of that up, and it’s understandable that the Rays are nearly giving away tickets for free to get people into the Trop for the team’s upcoming series against the Orioles.

The Rays are offering $2 tickets for the July 1-3 series vs the Orioles. Via the Tampa Bay Times:

At a time when they have angered some fans by introducing a plan to split future seasons between Tampa Bay and Montreal, the Rays today announced a significant ticket discount to draw more fans to Tropicana Field next week – $2 tickets to the Monday, Tuesday and Wednesday games against the Orioles.

Additionally, fans can purchase peanuts and fountain drinks for $2.

On the one hand, you have to watch the Orioles and in the worst stadium in the majors. On the other hand, you get to see a major league baseball game (or, at least with one of those teams being MLB quality) for only $2.

If you’ve decided the deal is worth it and want to attend the series, you can purchase tickets at raysbaseball.com/specials.