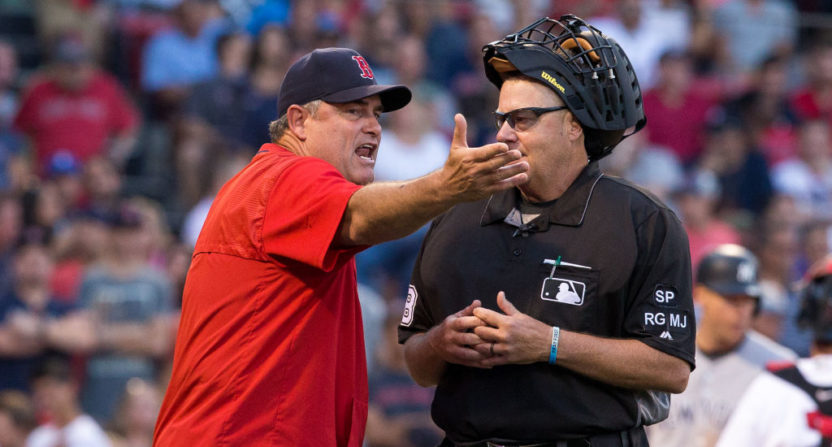 Heading into the final month of the 2017 MLB season, controversy is erupting in (where else?) the AL East. The New York Yankees have accused the Boston Red Sox of using an Apple Watch to steal signs from them and other teams in the league.

This comes from a New York Times report detailing the allegations.

Investigators for Major League Baseball have determined that the Boston Red Sox, who are in first place in the American League East and likely headed to the playoffs, executed a scheme to illicitly steal hand signals from opponents’ catchers in games against the second-place Yankees and other teams, according to several people briefed on the matter.

The baseball inquiry began about two weeks ago, after the Yankees’ general manager, Brian Cashman, filed a detailed complaint with the commissioner’s office that included video the Yankees shot of the Red Sox dugout during a three-game series in Boston last month.

The Yankees, who had long been suspicious of the Red Sox stealing catchers’ signs in Fenway Park, contended the video showed a member of the Red Sox training staff looking at his Apple Watch in the dugout and then relaying a message to players, who may have then been able to use the information to know the type of pitch that was going to be thrown, according to the people familiar with the case.

Not to be outdone, the Red Sox responded by accusing the Yankees of using a YES Network camera to steal signs from them.

The Red Sox responded in kind on Tuesday, filing a complaint against the Yankees, claiming that the team uses a camera from its television network, YES, exclusively to steal signs during games.

The Times story goes on to explain that the Red Sox “admitted that their trainers had received signals from video replay personnel and then relayed that information to some players,” and also that MLB Commissioner Rob Manfred had not decided what (if any) penalties to dole out to the Red Sox following the investigation.

Interviews were conducted with Boston’s trainers and outfielder Chris Young, while the team also claimed that both manager John Farrell and Dave Dombrowski were clueless about the sign stealing.

However, Farrell admitted on Tuesday that he only didn’t know that his players were using electronic devices to steal signs.

To clarify. Farrell knew players were trying to steal signs. He did not know there were devices being used. "I would have shut that down."

The Yankees shared a video with MLB that they believe shows the sign stealing in progress.

The video provided to the commissioner’s office by the Yankees was captured during the first two games of the series and included at least three clips. In the clips, the team’s assistant athletic trainer, Jon Jochim, is seen looking at his Apple Watch and then passing information to outfielder Brock Holt and second baseman Dustin Pedroia, who was injured at the time but in uniform. In one instance, Pedroia is then seen passing the information to Young.

The Yankees took three out of four games from the Red Sox in their weekend series this past week at Yankee Stadium. Earlier in August, the Red Sox won two out of three games against the Yankees at Fenway Park in the series where the sign-stealing was noticed.

It’s difficult to imagine any punishment being significant, especially for a deep-pocketed club like the Red Sox. And the Yankees won’t have a change to get revenge on the Red Sox during the regular season, as their season series with Boston concluded on Sunday. But if New York, just 2.5 games back of the Red Sox in the AL East standings, overcomes Boston to win the division crown, I think they’ll be quite satisfied, no matter what the eventual punishment might be.