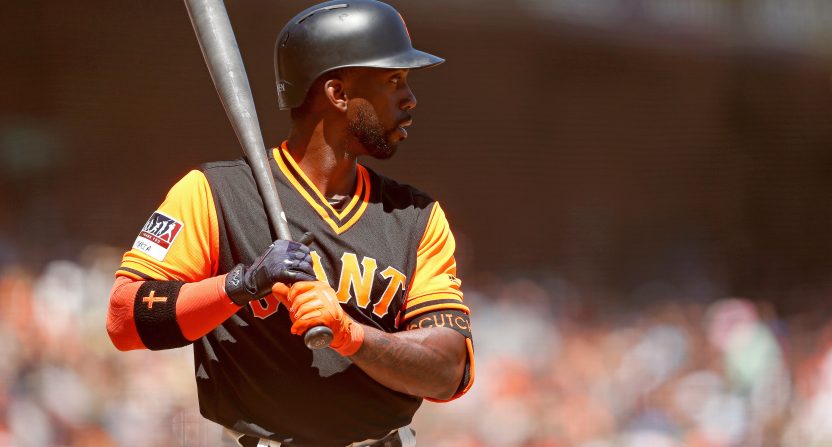 The New York Yankees have acquired veteran outfielder Andrew McCutchen for two prospects, according to Joel Sherman of The New York Post. One of those prospects is 23-year-old middle infielder Abital Avelino.

I hear if the trade is completed #yankees will be sending two prospects to the #sfgiants for McCutchen and that Abital Avelino is one of them.

McCutchen makes $14.75M this yr, but #Pirates picked up $2.5M in his trade. It means he has roughly $2M left on his deal. Not sure yet if any money would change hands between #Yankees and #sfgiants

McCutchen — a five-time All-Star and the 2013 NL MVP — is no longer the elite player he was for so many years, but he’s still a rock-solid right-handed bat. The 31-year-old has a .255/.357/.415 slash line 15 homers, 13 stolen bases, and a 115 wRC+. He still takes his walks (12.9 BB%), hits for power, and gives a professional at-bat. He’s the kind of hitter that can stand a decent chance against elite pitching in the playoffs, whereas hitters like Aaron Judge and Giancarlo Stanton (30% strikeout rates) can be more easily exposed.

Speaking of Judge- he’s still recovering from a fractured wrist and is still not swinging a bat.

Aaron Judge update: Still not swinging at all.

So, it makes sense to acquire McCutchen to help make up for the production lost with Judge out. And if/when Judge returns to the lineup, the Yankees will be absolutely loaded with power (and especially from the right side): Judge, McCutchen, Stanton, Gleyber Torres, Miguel Andujar, etc. Didi Gregorius (22 homers) and Gary Sanchez (14 homers) are also currently on the disabled list.

Defensively, McCutchen doesn’t offer the same range he used to when he played center field, but he’s perfectly fine in a corner (he’s worth 3 defensive runs saved in right field this year, for example). And he hits enough to be a solid option at designated hitter if the Yankees feel they can get better outfield defense from other players.

After nine fantastic seasons in Pittsburgh, McCutchen was traded to the San Francisco Giants over the offseason. The Giants (67-68) have had a very disappointing season, and with McCutchen set to be a free agent in the winter, San Francisco finally decided to trade him (they probably should’ve just done this in July, but must’ve held out hope that they could make a run in the NL playoff race).

Now, McCutchen joins a title contender, though one that is likely only guaranteed a one-game playoff. The Yankees (84-50) are eight games behind the Boston Red Sox in the AL East, and hold a four-game lead for the top AL Wild Card slot.