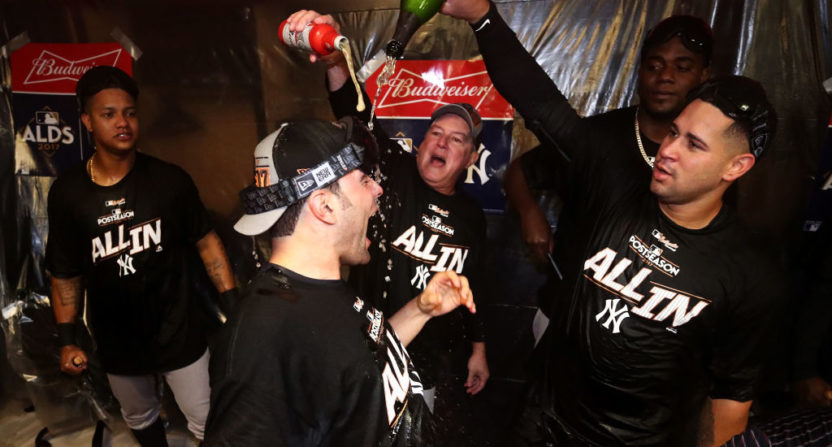 One divisional series ended while another was extended on Wednesday after a pair of really good playoff games. Despite the scores, both Washington’s win over the Cubs and the Yankees’ decisive victory against Cleveland felt like one-run games.

After a rainout, the Nationals and Cubs were forced to play Game 4 of their series at Wrigley Field Wednesday afternoon. The talk on Tuesday was of mold, Washington having to change hotels and a number of Nationals apparently feeling under the weather.

Oh, and Stephen Strasburg. The extra day appeared to give Dusty Baker a chance to give the ball to one of baseball’s best with the season on the line. When speaking to reporters after Tuesday’s game, Baker said that Tanner Roark would still start Game 4 of the series because Strasburg had been dealing with an illness.

That may have been a bit of gamesmanship on the part of Washington’s manager, as it was announced prior to first pitch Wednesday that Strasburg in fact would start. Whether that was the plan all along or not, it worked. The righty struck out a dozen over seven scoreless innings to keep Washington alive.

Jake Arrieta pitched well for the Cubs, allowing just an unearned run over four innings of work. The Nats took a 1-0 lead in the third inning thanks to an Addison Russell, and the score stayed there until the eighth. Jon Lester was used in relief and even picked off a runner, but things unraveled for the Cubs in the penultimate frame.

With two outs, Lester gave up a single to Daniel Murphy. Carl Edwards replaced Lester and walked two to load the bases before being taken out. Wade Davis came in, but could not get out of the jam. Michael A. Taylor bested Davis and the elements on a brisk evening in Chicago, hitting a grand slam to make it 5-0.

That was more than enough for Washington’s revamped bullpen. Ryan Madson and Sean Doolittle, both acquired from the A’s in July, pitched the final two innings to force a Game 5. These teams will play again Thursday night in Washington D.C. with the winner facing the Dodgers in the NLCS.

The Yankees completed an improbable comeback in Wednesday’s nightcap, beating the Indians 5-2 in a winner-take-all game at Progressive Field. Less than a week ago, they were down two games to none against the team with the best record in the American League. Now, they’re headed to their first ALCS since 2012, and they’ve spoiled Cleveland’s season along the way.

Because you can’t predict baseball, Didi Gregorious took Corey Kluber deep twice in the first three innings to give the Yankees an early 3-0 lead. After a disappointing outing in Game 2, Kluber scuffled again Wednesday. For the second start in a row, he was taken out in the fourth inning.

CC Sabathia apparently found a time machine, turning in a start in Cleveland more reminiscent of his time with the Indians. The 37-year-old tied a regular season best with nine strikeouts. He was perfect through three and did not allow a run through four innings before running into trouble.

A pair of RBI singles forced Joe Girardi to turn to the bullpen with one out in the fifth. With two on, David Robertson kept the 3-2 lead intact by inducing a double play. Though Sabathia did not make it through five innings, the Yankees managed to need just two relievers. Robertson went 2.2 innings, and Aroldis Chapman earned the save with four strikeouts over the final two innings.

The Yankees added a pair of insurance runs in the top of the ninth on a Brett Gardner single that capped off a 12-pitch at-bat. The way things were going for Cleveland, a 5-2 deficit was too much to overcome.

We were speculating about Joe Girardi’s job status last Friday. Now, his Yankees will play the Astros in the ALCS with a spot in the World Series on the line.