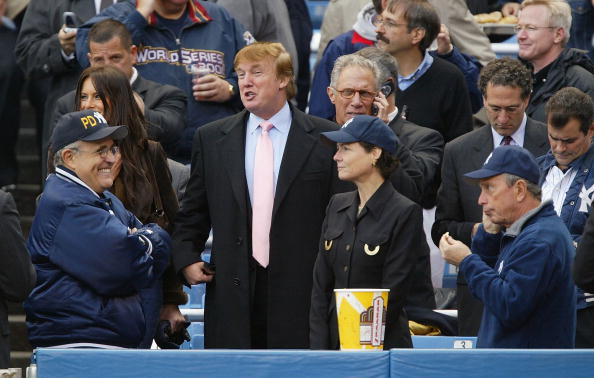 In the five-plus years since George Steinbrenner’s death, the Yankee empire has grown by leaps and bounds, encompassing not only the team, but also Yankee Stadium, a 20% share in the YES Network (thanks to Fox buying up 80% of available shares in recent years), and a 20% share in NYCFC (among other holdings). Could the Steinbrenner family eventually get out of the Yankee business? It seems like a longshot, but Nick Cafardo of the Boston Globe revealed that if the Steinbrenners were willing to sell, 2016 Republican Presidential candidate Donald Trump could be an interested party.

Some bigwigs in the New York business community wonder whether Hal Steinbrenner would entertain a sale of the Yankees. “There would be no shortage of potential buyers,” said one prominent New York multimillionaire. “If Donald Trump doesn’t become president, there’s one major player for the Yankees.”

If Brian Cashman thought George Steinbrenner had a hands-on management style…could you imagine what Donald Trump’s management style would be with the Yankees? If he was the team owner this offseason, David Price and Johnny Cueto would already be in pinstripes. The Yankees, who have paid more than 85% of all luxury taxes assessed to MLB teams since its implementation in 2003, would end up paying something like $30 million in tax per year (a mark they only crossed once, back in 2005). When players, coaches, or executives would screw up, elaborate press conferences would be called to relieve them of their jobs (completed with a Trump-style “you’re fired” at the end).

Baseball *could* use some more visible, outspoken owners, however. Hank and Hal Steinbrenner are much more quiet and reserved than their late father. Many teams, like the Braves, Blue Jays, and Mariners, are owned by monolithic corporations. Other owners, like Houston’s Jim Crane, Pittsburgh’s Bob Nutting, and Cincinnati’s Bob Castellini, are often heard, but not seen. Where are the characters like Mark Cuban, or Steve Ballmer, or hell, even Mario Lemieux? The Yankees don’t *need* any more buzz, but it sure would be fun if they were run by a loose cannon willing to say whatever is on his mind.

As long as he acts more like Steinbrenner than widely despised cheapskate Marlins owner Jeffrey Loria, this would be wonderful.