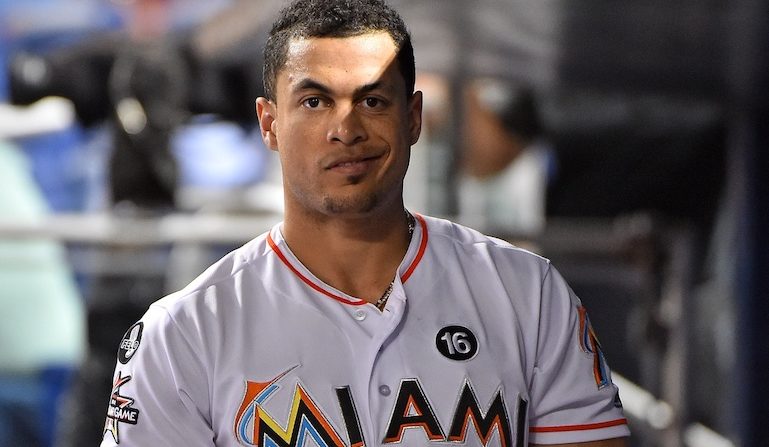 The New York Yankees and Miami Marlins were up all Friday night working on the details of a trade that would send superstar slugger Giancarlo Stanton to the Bronx. On Saturday morning, there isn’t going to be any walk of shame. The Yankees have added baseball’s most powerful hitter and 2017’s National League Most Valuable Player to their lineup, in a move no one could have anticipated even a week ago.

As first reported by FanRag Sports’ Jon Heyman, the Yankees have acquired Stanton from the Marlins. The most prominent name going to Miami in exchange is infielder Starlin Castro, who would presumably fill the second base spot opened up when the Marlins traded Dee Gordon to the Seattle Mariners earlier this week.

What’s notable here is that the Yankees didn’t have to give up any of their top prospects in a blockbuster trade. But that’s the advantageous position they enjoyed by Stanton exercising his no-trade rights to force a deal to a team he wanted to play for, rather than going to the St. Louis Cardinals or San Francisco Giants, both of whom surely had better prospects to offer the Marlins.

UPDATE #1: Pitchers Jorge Guzman and infielder Jose Devers are going to Miami. Guzman, 21, spent last season at low-A Staten Island, racking up 88 strkeouts in 66.2 innings with a fastball that hits 100 mph. He was ranked No. 9 in the Yankees system by MLB.com. Devers batted a combined .246 with a .679 OPS in Gulf Coast and Dominican rookie league ball.

Jorge Guzman can touch triple-digits easily, struck out 88 in 66 2/3 IP this season. But there are questions about the SL and CH, and he’s still only pitched in short season ball. He’ll turn 22 in January. #Marlins

Actually, if we truly want to give proper credit for reporting the deal, former Yankee and 1996 World Series star Jim Leyritz was the first to say that this was a done deal.

Giancarlo Stanton to the yankees. It's done.

With the trade finally being made, Yankees general manager Brian Cashman and new field manager Aaron Boone essentially get to play fantasy baseball in adding Stanton and the 59 home runs he hit last season to their roster. With Stanton and Aaron Judge (52 homers), the Yankees now have two of MLB’s top three 2017 hitters in WAR (according to FanGraphs) in their lineup

Judge had his most success hitting second, providing the Yankees with unmatched power at the top of the batting order. Presuming Didi Gregorius (who blasted 25 home runs) bats third to put a left-handed hitter between Judge and the reigning NL MVP, Stanton will bat fourth with either Greg Bird or Gary Sanchez batting behind him, depending on how much Boone values alternating right- and left-handed hitters. The two through six spots in the Yankees batting order are truly fearsome.

Needing to figure out where Stanton and Aaron Judge will play in the same outfield is the very definition of great problems to have. For what it’s worth, neither Stanton nor Judge have played left field in the majors. Both players made a handful of appearances at that position in the minors (Judge seven games in AAA last season, Stanton six games between low-A and AA).

That will almost certainly change, though the designated hitter slot will help greatly with that while getting better defensive outfielders like Brett Gardner, Aaron Hicks and Jacoby Ellsbury on the field. A trade will very likely have to be made to break up that logjam.

yanks planning to rotate giancarlo, judge and gardner between the 2 corner OF spots and DH (though gardner wouldn't ever rotate to RF)

Considering that Ellsbury was nudged from center field by Hicks, he would appear to be the odd man out. But the 34-year-old is owed $47 million for the final two years of his contract (including a $5 million buyout for 2021 that’s certainly to be exercised).

That might make Gardner or Hicks more appealing in trade, though the Yankees would be sacrificing considerable defense. Hicks compiled 12 Defensive Runs Saved in center field with an Ultimate Zone Rating of 4.8, according to FanGraphs, while Gardner notched 17 DRS and a 7.1 UZR in left.

Is it silly to be worrying about defense when the Yankees are adding 59 home runs (a total which is sure to increase hitting at Yankee Stadium) and a 6.9 WAR to their lineup? Oh, probably — especially since neither Stanton or Judge is a slouch playing right field. Judge posted a 6.1 UZR with nine DRS and Stanton was even better, with 10 DRS and a 6.7 UZR.

Concerns over who plays second base for the Yankees might also seem silly when talking about adding Stanton. But that position was an issue between the time that Robinson Cano left as a free agent and Castro was acquired in trade. Top prospect Gleyber Torres would be the ideal candidate and could be ready after ending last season in Triple-A, where he batted .309 with an .863 OPS in 96 plate appearances. If not, Ronald Torreyes is probably the leading contender to start there unless the Yankees sign a short-term stopgap like Brandon Phillips or maybe Jose Reyes.

I reported #Yankees are sending at least Castro to #Marlins among veterans and prospects, but not their top ones

The minor leaguers going to Miami haven’t yet been officially named as of this writing, but reports have Class A-level prospects involved in the deal. New Marlins head of player development Gary Denbo had the same position with the Yankees and is very familiar with the team’s farm system.

But the Yankees are taking on Stanton’s massive contract, which could be a 10-year, $295 million package. However, Stanton can opt out of the deal after the 2020 season, which means the Yankees may only get three years from him (at a cost of $77 million). What a three years it could be, though, as Stanton could potentially register numbers that put him in company with the likes of Roger Maris, Mickey Mantle and Babe Ruth.

the agreed-upon deal: yankees get stanton plus about $35M, marlins gets castro plus prospects

UPDATE #2: The Yankees will also get $30 million (paid out over 10 years) from the Marlins in the deal, which could help the team avoid going over MLB’s luxury tax threshold.