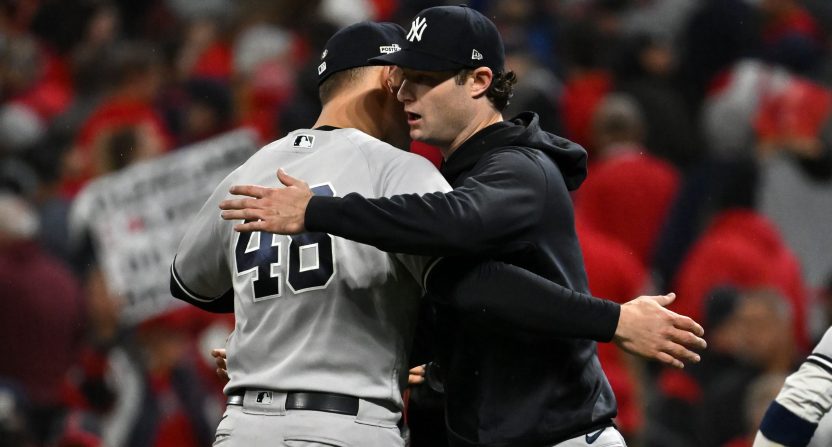 The New York Yankees had their backs up against the wall in Game 4 against the Cleveland Guardians. Facing elimination with a loss, star pitcher Gerrit Cole showed up in a big way to lead New York to victory.

On the offensive side of things, New York got some big production from outfielder Harrison Bader, hitting his third home run of the series.

Bader has been an excellent addition for the Yankees at the trade deadline coming from the St. Louis Cardinals.

After Cole’s dominant outing, Yankees relievers Clay Holmes and Wandy Peralta were able to shut the door on the Guardians and secure a victory to force a Game 5 in the Bronx on Monday.

The one remaining Division Series will go the full five games. The Yankees fight off elimination in Game 4, beating the Guardians 4-2. pic.twitter.com/KL616SWEAw

It wasn’t the greatest offensive performance from the Yankees, but it did the job to force the only Game 5 in the MLB Playoffs in the Divisional Round this year.

Many are excited to see this elimination game for both teams with some huge stakes involved.

.@Yankees win 4-2 vs @CleGuardians -series tied 2-2. Game 5 tomorrow @yankeestadium– winner faces @astros in battle for AL championship . @GerritCole45 was super & @HarrisonBader was a solid pick up with bat & glove. VBDI said before playoffs Yanks vs Astros & it will happen .

Giants win and are 5-1.
Jets win and are 4-2.
Yankees have forced a Game 5.
Rangers off to a 2-1 start.
Knicks & Nets season begins this week.
NYCFC begins their playoff run at Citi Field Monday.

It's a pretty good time in NY sports right now.

The starters for Game 5 have already been announced, with Jameson Taillon for the Yankees facing off against Aaron Civale and the Guardians.

To clarify: Jameson Taillon is starting Game 5 for the Yankees.

If there’s a Game 5, Aaron Civale will start for the Guardians.

If history is any indicator, the Yankees may be in the driver’s seat to advance to the ALCS against the Houston Astros.

The Guardians organization has a history of heartbreak in elimination games, with a franchise record of only 1-7 in winner-take-all games.

That being said, this postseason has already been filled with upsets and anything can happen when it comes to playoff baseball.