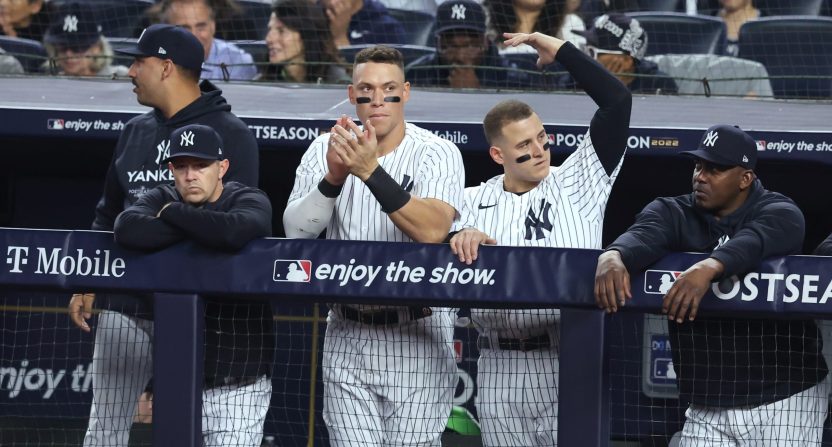 The New York Yankees were able to take a significant victory in Game 1 of their ALDS series against the Cleveland Guardians. Yankees fans were hoping that they could replicate that success on Thursday in Game 2, but it appears that Mother Nature has other plans.

It has been announced that Thursday’s prime time game has been postponed due to the forecast of inclement weather and rescheduled for Friday at 1:07 P.M. EST.

Tonight’s NYY-CLE game is postponed due to the forecast of sustained inclement weather & will be made up tomorrow, Friday, October 14 at 1:07 PM. pic.twitter.com/OyWtLomUr6

Those that have tickets to the game will be able to use those tickets on Friday instead, which is consistent with the MLB ticket policy but because the game was moved from Thursday night to Friday afternoon, many fans who were planning to go to the game have to work. Many took to social media to express their frustration now that the game is taking place during normal working hours.

A 1pm game on a Friday and no refunds. Get lost. https://t.co/5WdtbbJ3Ge

How are you gonna say no refunds or exchanges?? I work tomorrow during the day and can’t make the game!!!

glad all the unemployed will be able to go

Horrible game time. Why not do it that night!? Some of us have work

Those who work a traditional 9-5 job on weekdays are certainly very inconvenienced by this news, and it could certainly affect turnout for the Yankees faithful for this game.

Game 3 is set to take place Saturday night, so it certainly seems like a better option for fans may have been to make Friday’s game a night game.

However, that would have put the game directly in the time slot that the Dodgers and Padres game and TV has a big influence on when games are rescheduled.

There is no easy solution for inclement weather, but Yankees fans that are unable to go to the game have a fair gripe with this situation.