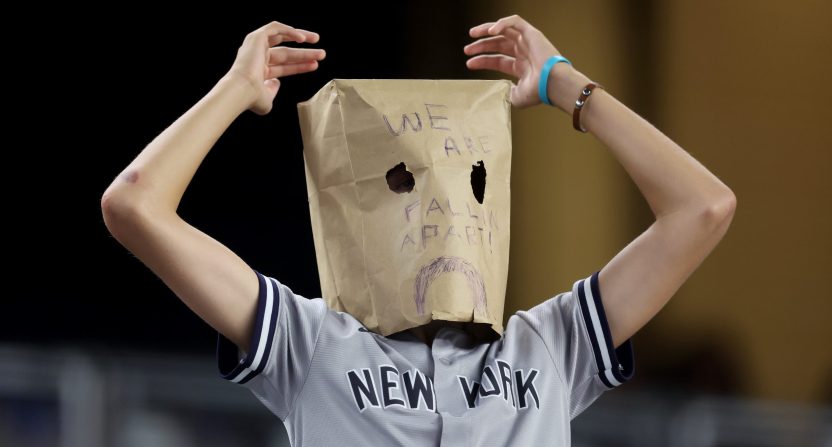 If Wednesday’s come-from-behind victory was going to help the New York Yankees get out of the funk that’s plagued them for most of the second half of the season, it hasn’t happened yet. Wednesday’s dramatic victory gave way to a blowout loss against the Toronto Blue Jays on Thursday.

The Blue Jays and Yankees opened up a four-game series in the Bronx. It was all Toronto. The Jays opened up a 5-0 lead in the top of the second inning. While the Yankees got two runs back in the third, Toronto’s offense responded with one in the fifth and three more in the seventh, leaving New York on the wrong side of a lopsided final score.

It was an all-around terrible performance for New York. Only four Yankees recorded a hit (though three of them notched a pair of hits).

Frankie Montas, the trade deadline acquisition who was supposed to help stabilize New York’s starting pitching, had a poor outing. He went six innings, allowing six runs (all earned) with eight hits and two walks. In three starts with the Yankees, Montas now has a 9.00 ERA 1.714 WHIP, and a K/9 rate of 5.1. While it is a small sample size, that’s a dramatic drop from the 3.18 ERA, 1.137 WHIP and 9.4 K/9 rate that he had in 19 starts with the Oakland Athletics.

The MLB world had a lot to say about New York’s latest struggle.

The Yankees turning their season around: pic.twitter.com/ag980kc27u

We are not back. pic.twitter.com/QKonQKkGro

“The Yankees are actually a serious contender this year”

Luis Castillo has allowed 5 ER in 20.2 innings since being traded.

Moral of the story kids, is pay the price to get the better player.

Yankees win tomorrow or we can not table any more conversations.

This is the 2nd time this season Frankie Montas has allowed 6+ runs in a game.

Both of those games have come as a Yankee.

Yankees fans convincing themselves that their team is good pic.twitter.com/UKlpavcRzV

The bad news for the Yankees is that they’re now 9-18 since the All-Star Break. And while they have a big cushion in their playoff races, there is a lot of time for the opponents to chase them down. If New York can get the ship righted soon, winning the division and being one of the top two seeds in the American League shouldn’t be much of a problem. If the Yankees can’t do that, though, September could prove to be a lot more interesting than anyone thought it would be.