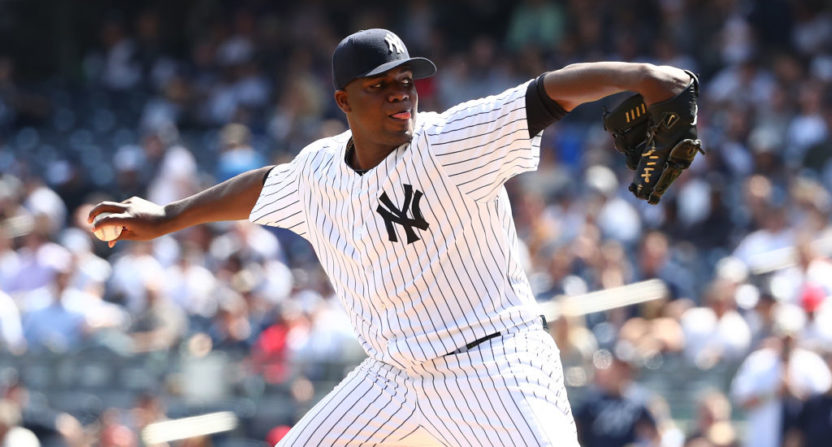 Winds are gusting on a 50-degree night in Boston. Fans are huddled together, clad in sweatshirts and jackets in April. Players are doing everything in their power to stay warm.  On the mound, Michael Pineda is trying to grip the ball. But he keeps scratching at his neck, touching some sort of black substance. Turns out, that mystery gauze is actually pine tar and Pineda is using it illegally, and advantageously, on the hill. He is swiftly ejected from the game, soon suspended for 10 games. That was his second start for the Yankees, three years ago.

Now? Pineda has a UCL tear on his elbow and is likely to have Tommy John surgery. It’s an enormous hit to a ball club that’s faced just as many downs in 2017 as it has ups.

This season, Big Mike is not the pine-tar-sporting fellow he was three years ago. This season, the righty jumped onto the big stage allowing two hits with 11 strikeouts in 7 2/3 innings against the Rays in the Yankees home opener on April 10. This season, Pineda started on the right foot.

Then, he fluctuated. He became his usual streaky and unpredictable self. He posted a 1-1 record with a 7.30 ERA in his last five starts and now, one season before his free agency, he’s headed off for Tommy John surgery.

This is not good for the Yankees for a number of reasons. While New York’s offense is undeniably hot, its rotation is shoddy at best. Peculiarly enough, Masahiro Tanaka is struggling and halfway into the season, no one understands why. That leaves two large holes in a Yankee rotation that began the year on the highest of hopes.

When Pineda was dealing in April, Tanaka was right on par. The Japanese ace posted a 5-0 record including one complete game through five starts from mid-April to mid-May before falling off the handle. Luis Severino looked promising, posting a 2.75 ERA all the way up to June 10. Then, CC Sabathia found his groove — putting up 5-0 record with a 1.11 ERA through five starts against difficult lineups like Boston and Toronto during mid-May to early-June.

It was all certainly too good to be true, as the Yankees now have the fifth-best team-rotation ERA (4.26) in the American League and 10th best overall at the midsummer break. It’s not the worst, and it’s not the best, but it’s above average. And with a powerhouse lineup that includes Aaron Judge, Gary Sanchez, Starlin Castro and Matt Holliday, a rotation that’s better than a B-minus is vital if the Yankees want to be a top team.

If Pineda truly does need surgery (and it seems like that’s the direction he’s headed toward), it means his perplexing Yankee career ends on Tommy John. Pineda will hit free agency after this season, and given that it typically takes about 12-16 months to recover from TJS, any team that signs him will have to contend with the fact he likely won’t pitch in the first year of his deal. It’s hard to imagine a scenario in which the Yankees re-sign Pineda given their talented young farm system.

The silver lining in Pineda’s injury is that it happened midseason. The non-waiver MLB trade deadline is three weeks away. This gives Yankees’ general manager and clutch trade guru Brian Cashman ample time to make moves, assuming New York is going for a pennant run rather than selling assets. But it’s possible the Yankees don’t have to look too far.

Chance Adams would be a really good look for the Yankees right now. The 22-year-old is dealing a 1.94 ERA with a 10-3 record through 17 starts in Triple-A and Double-A ball this season. Batters are hitting just .173 against the young righty from Arizona. And the Yankees wouldn’t have to spend big to get big if Adams pitches just as well in the Majors. New York has already called up many players from the minors this season alone, making it the Year of the Prospect. Some of them paid off (Montgomery, Clint Frazier, Miguel Andujar and, of course, Aaron Judge), while other’s got injured quickly (Greg Bird, Dustin Fowler) or struggled (Tyler Wade).

But if the Yankees can’t fix their rotation internally, they’ll have to make like the Cubs and land a huge ace from somewhere else entirely. No one expected the Cubs to finish half the year below .500, and Theo Epstein worked his magic in an attempt to fix the plummet by landing White Sox ace Jose Quintana for Eloy Jimenez and a trio of prospective minor leaguers.

Cashman is capable of such a deal, but who’s available? And are the Yankees willing to give up prospects from a highly touted farm system?

They could potentially go after the Athletics’ Sonny Gray. The righty signed a 1 year, $3,575,000 contract with Oakland to avoid arbitration. He’s pitching well recently, posting a 4-4 record on a 4.00 ERA in 13 starts for a team that’s in last place in the AL West.

If so, New York could give up shortstop/outfielder Jorge Mateo, who’s slashing .265/.328/.457 with seven homers for Double-A Trenton this year. The 22-year-old from Dominican Republic would be of good use to the A’s, and less use to the Yankees anytime soon because of Didi Gregorius’ breakout year and the organization’s glut of outfielders. Attach an A-ball prospect to Mateo and these two squads could actually work out a decent deal.

Regardless of the Yankees’ many options to fix this sputtering rotation, Pineda’s injury leaves the Bombers in an immediate sticky situation. Beginning on Friday, New York faces off against Boston in Fenway Park for four games due to a makeup. Coming out of the All-Star break, this series is important for the Yankees to set the tone for the second half of the year. The Red Sox are in first place, three and a half games ahead of the second place Yanks. And without Big Mike, New York’s rotation in Boston goes from Jordon Montgomery to Severino to Bryan Mitchell to Tanaka. These are not exactly Hall-of-Fame threats from the hill.

So the Yankees will have to work swiftly to fix the mess Pineda has left behind. And while an injury is nothing like using an illegal substance, the aftermath of his surgery is not a far cry from his pine tar episode. It seems Pineda is capping his Yankee career the same way he started it: in chaos.

The second half of the year is off to a muddled start for the Bronx Bombers, leaving us on the edge of our seats for what’s to come next.