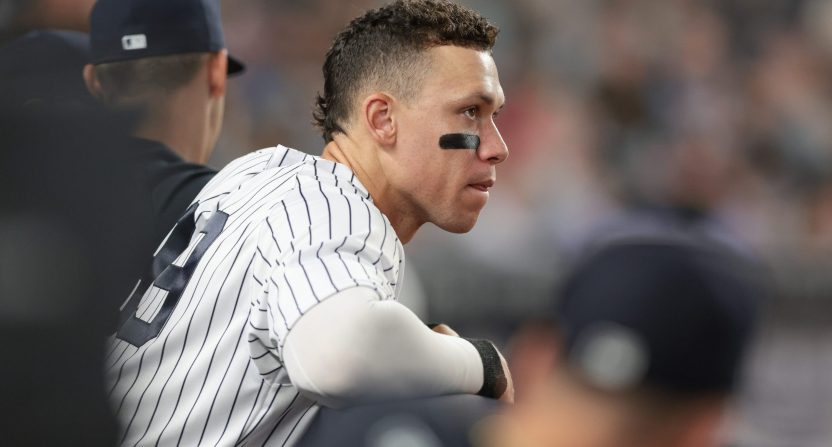 The New York Yankees are mired in an extended funk, which understandably has manager Aaron Boone upset. But the funk goes beyond simply the team’s poor record. The mighty Bronx Bombers have been anything but of late and are in an offensive slump not experienced by that franchise in over 100 years.

While New York is 2-9 over its last 11 games, the pitching would suggest that things should be better. The Yankees have only surrendered 43 runs — or 3.9 runs per game — during that stretch. Offensively, though, it’s been a slog. New York has scored only 21 runs — or 1.9 per game. Even those numbers are enhanced by one game where the Yankees scored eight runs. Or, to put it another way, they’ve scored 13 combined runs in 10 of their last 11 games.

In the same period, the Yankees have a team batting average of .178. The last time the Yankees struggled like that offensively, Babe Ruth hadn’t even made his MLB debut.

Over their last 11 games, the New York Yankees have scored 21 runs while batting .178.

Prior to that, the last time the Yankees had so few runs while having such a low batting average for an 11-game span was in May 1914.

Given their tremendous history, that may not seem like such a big deal. But the Yankees consistently struggled in the years before Babe Ruth’s 1920 arrival. In general, offense around baseball was down in those years, hence the term, “dead ball era.” New York also had struggles in the mid-late 1960s, another pitcher-friendly era in MLB history. And from 1989-1992, the Yankees never finished better than 76-86.

So, while New York has an unprecedented amount of great history, there’s also plenty of futility to choose from. Yet, no 11-game stretch over the last 108 years has ever been this bad offensively.

The historic offensive futility caught the attention of the MLB world.

Everything is totally fine in the Bronx… https://t.co/K8q4Ed5DCl

hey, they said they were gonna make history this season https://t.co/j3YcpAqcub

The craziest thing to me while looking this up is that the Yankees still lead the AL East by 7 games. https://t.co/lJB1H5cxx4

From New York’s perspective, the American League East standings remain the justification for the “glass is half full” attitude. The Yankees are, indeed, still seven games up in the division and have the second-best record in the American League. So, the numbers say that New York should still cruise into the playoffs and bypass the Wild Card round.

That said, it must be noted that before this 11-game stretch, the Yankees had a 9.5 game lead in the division. They were 13 games up in the AL East at the All-Star break and 14 games up after sweeping a doubleheader on July 2.