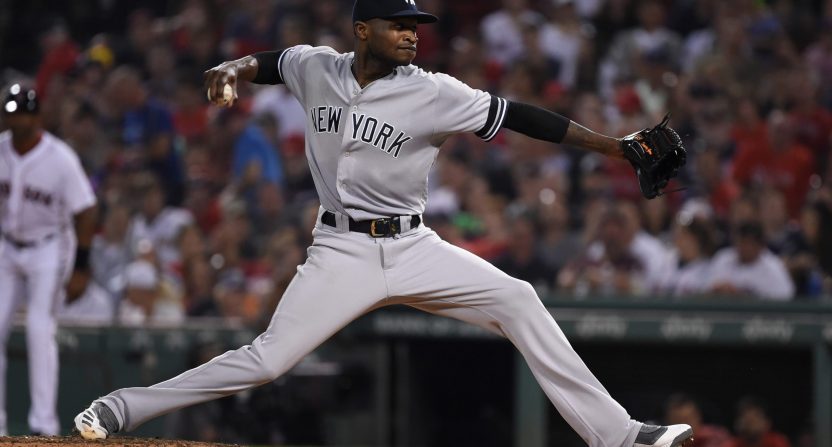 In January, New York Yankees pitcher Domingo German was suspended 81 games — retroactive to Sep. 19, 2020 — for violating Major League Baseball’s domestic violence policy. That makes him ineligible for the 60-game MLB season in 2020. And on Friday night, German made cryptic posts on Instagram that suggest he’s retiring from baseball.

In an Instagram story, German wrote (translated): “I left baseball. Thanks my people.”

#Yankees pitcher Domingo German posted this on his Instagram page. Translation is: “I left baseball. Thanks my people.” pic.twitter.com/8CSWcX9q05

German also had a more detailed Instagram post (translated via ESPN’s Marly Rivera): “Some people make history on both sides (?), I think I did my part at Yankee Stadium, if I decide not to come back, I will be very proud of my 11-year professional career. God bless everyone who has supported me.”

Last September, German was placed on administrative leave after allegedly slapping his girlfriend following a CC Sabathia charity event, and was officially suspended for 81 games (63 games retroactively) on Jan. 2.

But his apparent decision to just walk away from baseball came out of nowhere.

Yankees manager Aaron Boone is aware of German’s comments, but had nothing to say to the media in response.

Asked about Domingo German, Aaron Boone said that he has heard about the Instagram post but does not have anything further to offer about the situation.

So, this is a bizarre development, and we’ll see if there’s an explanation soon.