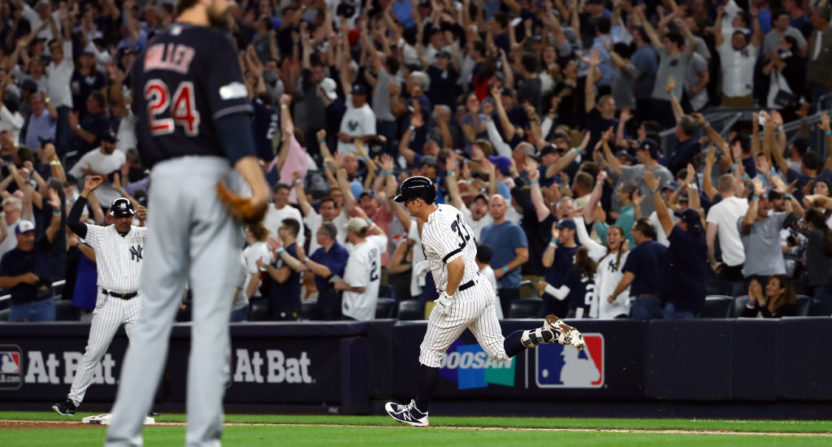 Both the Red Sox and Yankees had their backs against the wall Sunday, and both won to keep their seasons alive. The Astros and Indians were unable to finish up their respective American League Division Series. The Red Sox won in a slugfest to start the day, while their New York rivals stayed alive in one of the few pitchers duels we’ve seen this postseason.

It looked initially like Houston would run away with Game 3 and the series early on Sunday, but Boston charged back with clutch offense and a stellar relief appearance from David Price. The Astros jumped out to a 3-0 lead in the first inning thanks in part to a Carlos Correa home run. This came on the heels of Houston outscoring Boston 16-4 in the first two games

The Astros nearly doubled their lead in the second, but Mookie Betts took away a potential three-run home run from Josh Reddick. If Houston was up by six in the second inning, this recap would be a lot different. Perhaps Boston’s season would be over.

Instead, the game turned in their favor. Once again, we saw a starter pulled early in a playoff game. Boston’s Doug Fister was replaced with Joe Kelly. While the bullpen will be gassed for Game 4 (Drew Pomeranz went just two innings Friday), it worked to keep the Red Sox alive Sunday.

The offense finally stepped up for the Red Sox. The team was dead-last in the American League in home runs in the regular season, but they hit a pair of big long balls Sunday. Rookie Rafael Devers gave the Red Sox a 4-3 lead in the third with a home run off of Francisco Liriano (after Houston pulled starter Brad Peacock early).

Boston took control of the game in the seventh with six runs to go up 10-3. The rally was capped off by a quintessential Fenway home run from Jackie Bradley Jr. Josh Reddick, who was robbed of a home run earlier, had Bradley’s fly ball go off his glove and into the seats behind Pesky’s Pole in right field. The homer, which likely wouldn’t have left the yard without Reddick’s assist, put the game out of reach.

Game Four is Monday at Fenway, with Rick Porcello slated to start for the Red Sox. Boston desperately needs Porcello to look like last year’s American League Cy Young Award winner given the state of the bullpen.

In a postseason dominated by shootouts and short starts, we finally saw a low-scoring affair in Sunday’s nightcap. The Yankees’ Masahiro Tanaka turned in maybe the best start of the postseason, going seven shutout innings. Carlos Carrasco was strong as well for Cleveland, working into the sixth inning without allowing a run.

The Indians nearly struck first in the sixth inning. It looked as if Francisco Lindor broke up the shutout with a drive to right field, but Aaron Judge’s tremendous rookie season continued with a robbery to keep the game scoreless.

Finally, the Yankees got on the board in the seventh. The run came off Andrew Miller, who was nearly untouchable in last year’s postseason. Greg Bird took Miller deep with a shot into the upper deck in right field (the aftermath is seen above). That wound up being the only run of the game, as Aroldis Chapman finished off the game with a five-out save.

It figures that the one run the Yankees scored Sunday came off of Miller. The archetype for the dominant playoff reliever that is so prevalent in today’s game wound up the losing pitcher. It’s an October where little has made sense thus far. Starting pitchers haven’t mattered much, and offense has taken center stage.

With both the Red Sox and Yankees winning Sunday, we’ve got another day with four playoff games. Monday should be fun, with three teams–Houston, Cleveland and Los Angeles–getting an opportunity to advance.