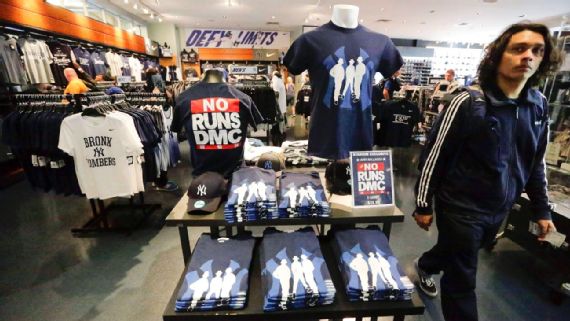 The New York Yankees have reached an agreement with an iconic hip hop group to highlight the success of their dominant relievers.

The Associated Press reports the Yankees are now selling “NO RUNS DMC” T-shirts for $39.99 in honor of their bullpen trio Dellin Betances, Andrew Miller, and Aroldis Chapman. The team reached a licensing deal with Run DMC to produce the shirts which reference the hip hop group.

Here’s the description of the shirt per the AP:

“The mostly navy shirts feature the initials of the relievers — the first name of Betances and the last names of Miller and Chapman — with lettering in white and “NO” and their uniform numbers boxed in red. The other side has the three members of Run-D.M.C. — Jam Master Jay, Darryl McDaniels and Joseph Simmons — silhouetted in white with a lighter blue Yankees “NY” logo backdrop.”

The t-shirt sounds like a must have for Yankees fans who want to show some respect to their great bullpen.

It’s a great way for New York to show some love to its relievers, who don’t always get the accolades they deserve. Getting Run DMC to license the shirts in association with the Yankees is fitting and a nice touch.