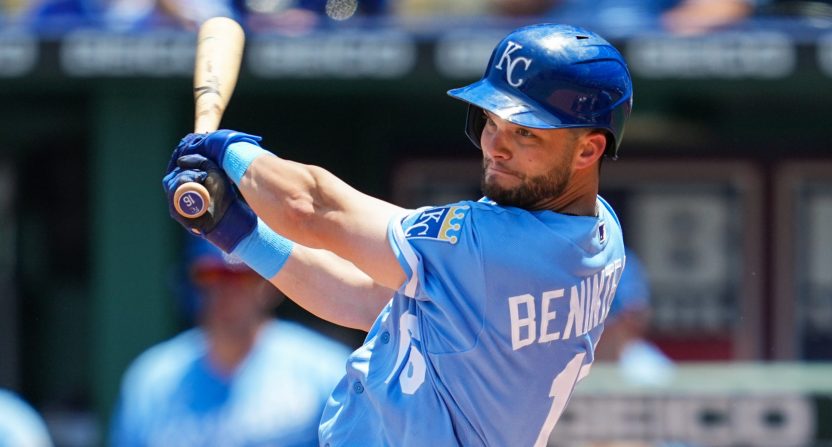 The Hot Stove action is finally heating up ahead of the Aug. 2 MLB trade deadline.

The New York Yankees today announced that they have acquired OF Andrew Benintendi from the Kansas City Royals in exchange for minor leaguers RHP Chandler Champlain, LHP T.J. Sikkema and RHP Beck Way.

The Yankees acquiring Benintendi is particularly interesting when considering that he’s unvaccinated and missed Kansas City’s trip to Canada to face the Toronto Blue Jays earlier in July. New York has a three-game series in Toronto in September, and it’s possible the Yankees and Blue Jays meet in the postseason.

However, Benintendi reportedly will get the vaccine, and Jon Heyman of the New York Post reports that even the Blue Jays were trying to trade for the outfielder.

Blue Jays were trying for Benintendi too, so presumably teams have been under the impression he will be vaccinated

Word is, Benintendi has told folks he will get the vaccination. Trade is final, so Yankees must believe he will.

Benintendi, 28, was selected to the All-Star Game this month for the first time in his career. He has a sterling slash line of .320/.387/.398 with an excellent contact game, striking out just 13.3% of the time (while walking a strong 10.0% of the time). His batting profile will be an excellent addition to complement the boppers in New York’s powerful lineup.

He also returns to the AL East, after being with the Boston Red Sox from 2016-20. Baseball America and MLB.Com ranked him the No. 1 overall prospect in baseball ahead of the 2017 season.

Benintendi is a free agent after this season, so the Yankees are hoping he can provide a big impact over the remaining three months (the Yankees — 66-33 — have an 11.5 game lead in the AL East).

Here’s a look at how the baseball world is reacting to the trade:

You can tell Aaron Judge has admired Andrew Benintendi’s game from the opposing dugout all these years pic.twitter.com/RvOoAnmPvA

Benintendi was coming to NY anyway — the Royals begin a 4-game series vs. the Yankees on Thursday.

Beck is the prize here. I saw him this spring and he flashed mid-rotation potential. Champlain and Sikkema are more backend starter types with a relief option if it doesn’t work pic.twitter.com/PohjaqczTM https://t.co/UMl1o9KJWC

Beck Way — who the @Royals pick up in the Benintendi deal — features a plus fastball.

The @Royals acquire T.J. Sikkema as part of the Benintendi deal.

Benintendi is a free agent at the end of the season, so the Yankees gave up three mid-level prospects to rent him for the stretch run and the postseason. First gauge of what the rental market could look like.

Andrew Benintendi joins the Yankees with a 2.4 bWAR and .788 OPS (124 OPS+) this season. His .321 batting average is 29 points higher than the next highest qualified average on the team

The left fielder was a first-time All-Star in 2022 and a first-time Gold Glover in 2021 pic.twitter.com/57FtUVtqRu

#Royals be like, “If we can’t develop pitching, why don’t we acquire it from a team that can!” pic.twitter.com/D2nNweyMsg

MLB could really improve its vaccination rates among players if it just got everyone off the Royals and onto good teams. https://t.co/0HZNsGjX3P

Yankees to acquire Benintendi and a vaccine to be administered laterhttps://t.co/D9AC4KPFz9

Yankees were in the market for a lefty hitting outfielder. This may just be the shot in the arm they needed. https://t.co/p9sL7kHpHl