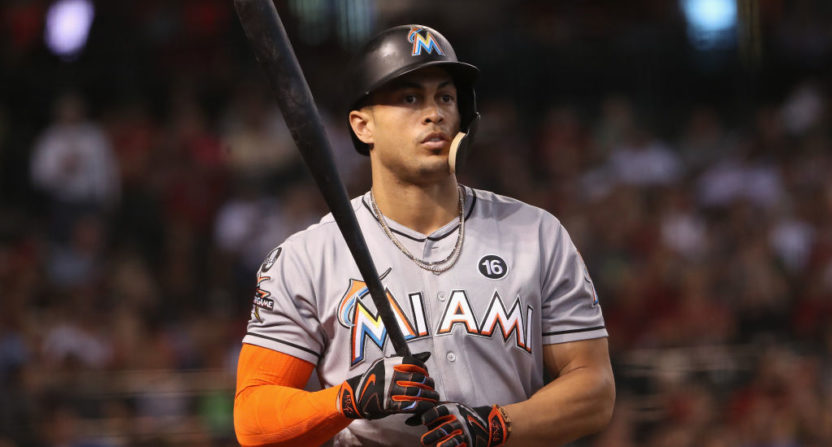 It was revealed on Friday that the San Francisco Giants and St. Louis Cardinals (sorry, BFIB) were out on a potential Giancarlo Stanton trade with the Miami Marlins. Both teams had worked out the framework for a trade, but Stanton refused to waive his no-trade clause to accept a deal. This news was hardly surprising after Sirius XM’s Craig Mish reported on Thursday night that Stanton would only accept a trade to the Los Angeles Dodgers, Chicago Cubs, Houston Astros, and New York Yankees.

With the Marlins’ leverage crumbling and Stanton apparently only having interest in going to four teams (he can basically force wherever he wants to go at the end of the day if the cost-cutting Marlins are hellbent on trading him), it was fair to assume that at least one or two of those teams would begin to show serious interest. And it appears the Yankees are doing just that.

Several reports emerged on Friday night that the Yankees are in talks with Derek Jeter and the Marlins to potentially acquire Stanton. Yahoo’s Jeff Passan even said that “momentum for Stanton to Yankees is significant.”

Sources: Yankees making progress on a trade for Giancarlo Stanton. One source cautioned nothing done. Another was confident it’s moving toward that. Either way, momentum for Stanton to Yankees is significant.

Sources: The Yankees recognize they’re in a position of significant strength right now. Same with Giancarlo Stanton, who can decide exactly where he wants to go and force a deal. And the Marlins … well, the Marlins are trying to figure out how to best salvage an absolute mess.

The New York Post’s Joel Sherman added that a deal between the Marlins and Yankees is “coming into focus.”

#Yankees are indeed making a move to try to land Stanton. Deal coming into focus

It’s also assumed that, in addition to a high-salary veteran or two going back to Miami, the Marlins would also get a good prospect return from New York. However, FanRag Sports’ Jon Heyman reports that there wouldn’t be any of the Yankees’ best prospects involved in the deal (this could obviously change as talks advance, of course).

sources say it won't be the very top yankees prospects going to miami if deal gets done. but yanks prospect stash is deep, so that hurdle might be easier than the money.

Oh, and the Dodgers are reportedly still in talks for Stanton, but Morosi says that the talks with the Yankees are at “a more advanced stage.”

Source: Dodgers are among the teams still talking to the Marlins about Stanton.

Now, the Yankees would like to get their 2018 payroll under the $197 luxury tax threshold, so that would seem to make any deal difficult to pull off (the Marlins may have no interest in taking on the salary of Castro, Jacoby Ellsbury, Chase Headley, etc).

Additionally, this would seemingly take the Yankees out of the Bryce Harper and Manny Machado sweepstakes next offseason. But if you can control being able to get the game’s best slugger right now in a trade, it’s hard to argue with pulling the trigger, rather than hoping you can convince a Harper or Machado to join your team in free agency.

UPDATE: Hank Schulman of the San Francisco Chronicle reports that a Stanton deal to the Yankees “is close if not done.” Stay tuned.

Hear Stanton to Yankees is close if not done.

UPDATE 2: Jon Heyman reports that the Yankees-Marlins talks are “very serious” and have been “going on seriously at least a few days.”

yanks giancarlo talks are very serious, and they've been going on seriously at least a few days. the belief it could/would get done with NYY may have led stanton not to consider the giants as seriously as he might have.

UPDATE 3: Joel Sherman — at 3:30 AM ET — reports that Stanton to the Yankees is “virtually done.” The Marlins will reportedly receive Starlin Castro and “good but not top prospects if completed.”

Source: Stanton from #Marlins to #Yankees is “virtually done.” Close to finish line. Hear #Marlins will get at least Starlin Castro plus good but not top prospects if completed. Again physical review can still be part of this so nothing final, but close.

A stunning, late Friday night/early Saturday morning development in the baseball world. The Yankees led the majors in home runs with 241 in 2017, and it appears they are very close to adding a guy that hit 59 dingers (20 homers more than anyone else in the National League).

UPDATE 4: It appears to be a done deal.

sources: yankees and marlins have a deal for giancarlo stanton

Source: Giancarlo Stanton trade agreement is in place between #Yankees and #Marlins, but deal is still pending Stanton’s consent and Yankees approval of physical. @MLBNetwork @MLB