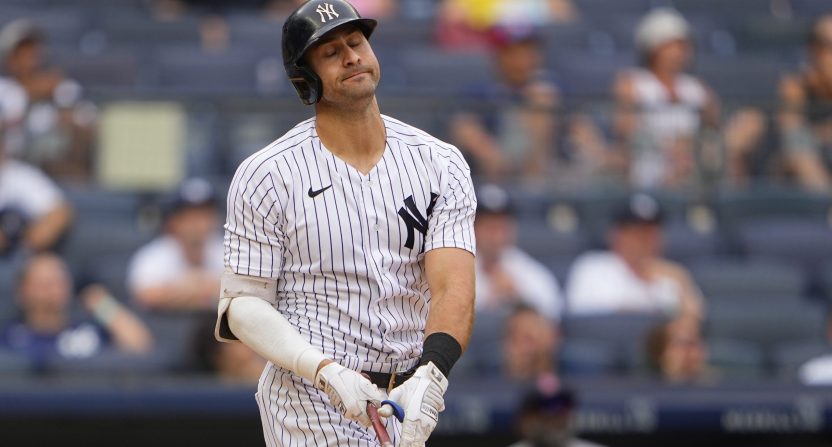 New York has always been a notoriously difficult place to play, and that has been extremely obvious when it comes to New York Yankees outfielder Joey Gallo. The former All-Star outfielder has greatly struggled at the plate in his second season in pinstripes, and it appears that his time with the organization is over.

ESPN’s Jeff Passan reported Tuesday that the Yankees have traded Gallo to the Los Angeles Dodgers in return for pitching prospect Clayton Beeter.

Beeter is currently the No. 15 prospect in the Dodgers’ organization, according to MLB.com, but has struggled thus far in his minor league career, currently holding a 5.75 ERA in Double-A Tulsa. Meanwhile, the Dodgers will look to revive Gallo’s career after a miserable season thus far that’s seen him only hitting .159/.282/.339 with 12 home runs in 273 plate appearances for the Yankees.

Many around MLB are excited to see Gallo with a change of scenery. That includes Yankees’ fans who have been critical of the 28-year-old outfielder.

I hope Gallo figures it out. Total professional while he was here https://t.co/auEDEdwC6l

Joey Gallo getting booed at Yankee stadium during the WS and then hitting a go ahead banger is something this simulation needs to make happen!

I feel for Joey Gallo. Never in a million years could’ve imagined he’d be so, so, so bad for the Yanks.

And there’s nowhere worse to struggle like that than the Bronx. Non-stop boos for months… https://t.co/RmqgVHerSU

Joey Gallo was indeed terrible with the Yankees. No, I don’t think he’s actually this bad but it did not work in New York. Hopefully the Dodgers can get him back on track. https://t.co/dvLwCTFObv

As expected, Yankees have dealt Joey Gallo. He's headed to Dodgers for minor league pitcher Clayton Better, a former 2d round pick. @ragazzoreport was first with the news. Gallo was so certain he'd be traded that he was packing his bags in the clubhouse yesterday.

It seemed like the 28-year-old Gallo knew that he was going to be traded. Beyond the bag-packing, he detailed in an interview with Randy Miller of NJ.com that he has received extremely harsh criticism from Yankees fans and that he “doesn’t want to show his face” in New York because of said criticism.

For the Yankees, it was clear that Gallo was just not working in New York. It may be addition by subtraction by trading him.

The Dodgers, on the other hand, will bring in a player who’s played at All-Star caliber at times, and was selected to that game in both 2019 and 2021. And they’re doing so for not much in return other than a lower-level pitching prospect in their organization.

A fresh start for Gallo may be good for both the Yankees and Dodgers moving forward, to say nothing of Gallo himself.