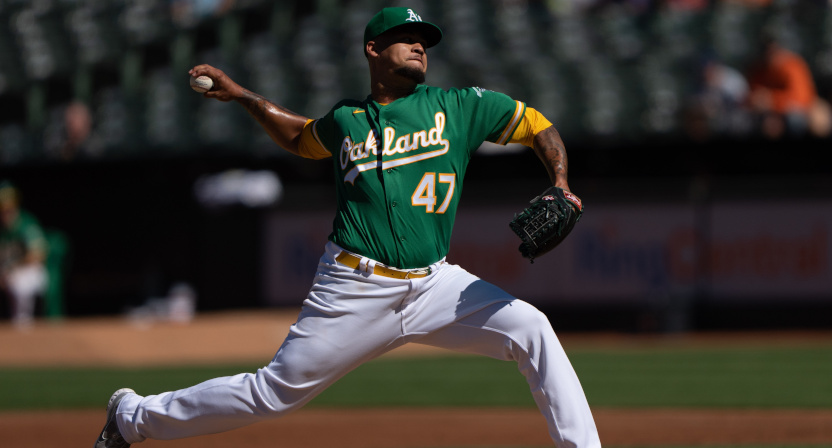 The New York Yankees are making a lot of moves ahead of Tuesday’s MLB trade deadline. After picking up outfielder Andrew Benintendi from the Kansas City Royals last week, the Yankees went after pitching Monday, landing starter Frankie Montas (seen above pitching against the Detroit Tigers in a July 21 game) and reliever Lou Trivino from the Oakland Athletics. Here’s how YES’ Jack Curry and ESPN’s Jeff Passan reported this:

The Yankees have acquired Montas and Trivino from Oakland.

For Montas and Trivino, Yankees parted with Sears, Waldichuk, Bowman and Medina.

The A's return for Frankie Montas is left-handers Ken Waldichuk and J.P. Sears, right-hander Luis Medina and second baseman Cooper Bowman, sources tell ESPN. @JackCurryYES was on both ends of the deal.

As for the Yankees‘ additions, the 29-year-old Montas has pitched 104.2 innings this year, posting 109 strikeouts against 28 walks with a 3.18 ERA. The 30-year-old Trivino has pitched 32 innings across 36 game appearances this year, recording 10 saves with 45 strikeouts, 14 walks, and a 6.47 ERA. And, as many noted, his acquisition will make for interesting moments if he winds up pitching to catcher Jose Trevino:

The Lou Trivino-Jose Trevino battery is gonna be awesome pic.twitter.com/hfeljo0AfF

Now they're both Yankees, and we'll probably soon see Trivino pitching to Trevino.

The greatest New York sports name combination since the Rangers had three players named Ferraro at the same time.

The Yankees are 69-34 on the year, 11.5 games ahead of the Toronto Blue Jays in the AL East. They already upgraded their offense with the deal for Benintendi, and now they’ve made moves to hopefully upgrade their pitching staff as well with this deal. We’ll see how the acquisitions of Montas and Trivino wind up working out for them, but they certainly can’t be criticized for not being aggressive.