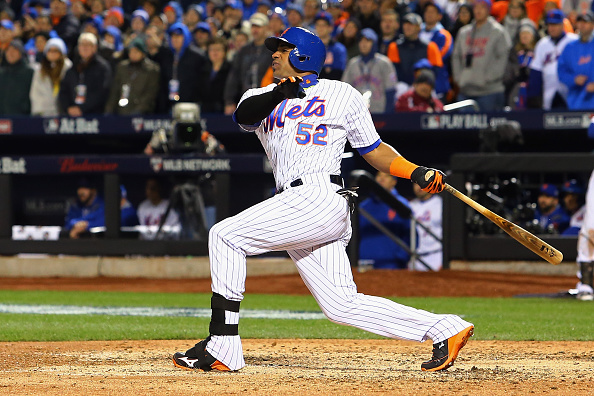 The New York Mets are bringing back outfielder Yoenis Cespedes after the two sides agreed to a three-year, $75 million deal on Friday night, according to very reliable MLB insiders Ken Rosenthal and Jon Heyman.

so cespedes tops heyward's 23M a year, which was top AAV this winter

The deal makes plenty of sense for both sides.

For the defending NL champion Mets, they get a big-time bat that played at an MVP level for them from August through October last season, after acquiring Cespedes at the July 31 deadline from the Detroit Tigers. Cespedes had a .287/.337/.604 slash line, 17 home runs, and a 2.7 fWAR with the Mets in 57 regular-season games.

And while it’s a lot of money, it’s a short-term commitment. The 30-year-old Cespedes will likely opt out after 2016, and even if he doesn’t, the Mets pay less than $50 million over the following two years for a power bat in an era where power is so difficult to find.

For Cespedes, it makes sense for the same financial reasons really.

He gets $27.5 million if he opts out, and then he will likely be the top position player on the free-agent market next offseason (whereas Jason Heyward was this winter). If Cespedes chooses to not opt out, he’s still getting $25 million per — tied for the all-time high for outfielders — over three years. And, he of course gets to play for a championship-contending club, in front of fans that worship him after helping lead the Mets to the World Series last season.

The one iffy feeling with this for the Mets is whether or not Cespedes — best-suited for a corner outfield spot –will be good enough in center field to make the contract worth it. But the offensive value he provides will likely outweigh any defensive limitations, and perhaps by quite a bit.

As Heyman says, the Mets are now clearly the team to beat the NL East.

mets middle of the order looks much, much better tonite. they are clear favorite in nl east. not even a question. — Jon Heyman (@JonHeyman) January 23, 2016

This is really a punch to the gut of the Washington Nationals, and pretty much summarizes how their offseason has gone.

So Nats have lost out on, not without trying and $, on Jason Heyward, Darren O’Day, Ben Zobrist and now Yoenis Cespedes.

The Nats lost out on free agents all offseason (Heyward, Zobrist, etc.). That they lose this guy (Cespedes) to this team (Mets) is worse.