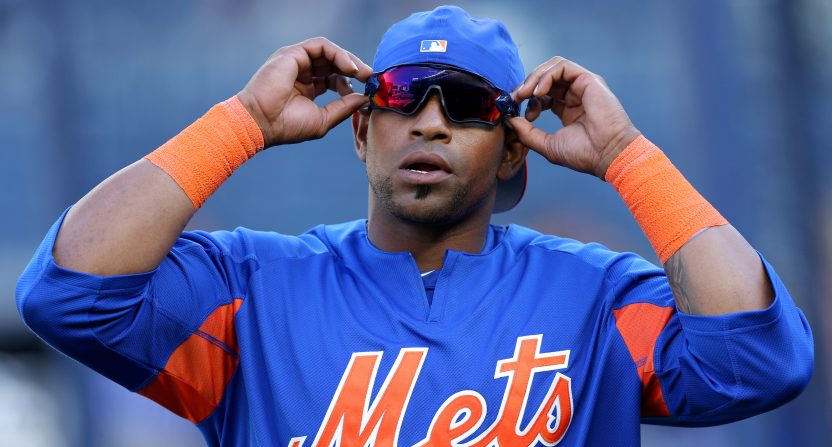 There was a bit of a typical Mets controversy over the weekend when manager Mickey Callaway claimed he didn’t know anything about Yoenis Cespedes having heel problems that were affecting his performance, and for which he might need surgery.

The timing was odd all around, as Cespedes had just returned from the DL to homer in that very game before revealing the potential surgery timeline. Callaway has since said he simply misspoke, which, sure, okay. But either way, Cespedes will indeed have the surgery, and will likely be out 8-10 months.

Via Anthony DiComo on MLB.com:

The Mets announced Wednesday that Cespedes will undergo multiple surgeries to eliminate calcification in both heels, as well as bone spurs in each heel.

The surgeries carry a minimum recovery period of eight to 10 months, knocking Cespedes out for the rest of this season and likely some of 2019. Mets assistant general manager John Ricco said the recovery could be longer, but will not be shorter.

Cespedes has been plagued by lower-body injures the past two seasons, injuries now thought to all be related to the calcification in his heels:

Cespedes, 32, missed significant chunks of last season due to hamstring and quad strains. He spent the offseason working on his flexibility, eschewing heavy weights in favor of yoga. But a hip flexor strain landed him on the disabled list May 14, and he wound up missing more than nine weeks. The Mets now believe the calcification in Cespedes’ heels caused him to alter his running style, resulting in his myriad leg injuries.

“You get to the point where that doesn’t make any sense, because you’re just going to stay in that cycle,” Ricco said. “We had him checked out by the doctors, and they’ve agreed that we’ve exhausted the conservative options. Now, surgery is really the only way to resolve this issue.”

The timing does make sense; Cespedes has little trade value at the moment, and the Mets are clearly out of it for the season. Having surgery now means even at the long end of the recovery timeline, Cespedes could be back in May next year; if things progress more quickly, he could even potentially be ready for the start of the year, which would give the Mets a shot at either contending (if that’s what they want to do, it’s never really clear with the Mets) or attempting to recoup something for him in a trade (though it’s the Mets, so they’d probably settle for salary relief.)

The entire Cespedes saga is just another fun example of how badly the year has gone for the Mets, aside from Jacob DeGrom’s strong performances. (And he might end up dealt himself.) The stadium literally catching fire barely even registers, and that happened less than two months ago. They may have too much overall and relatively recent success to be baseball’s Browns, but from a single-season standpoint, it’s hard to see how it could get worse from here.