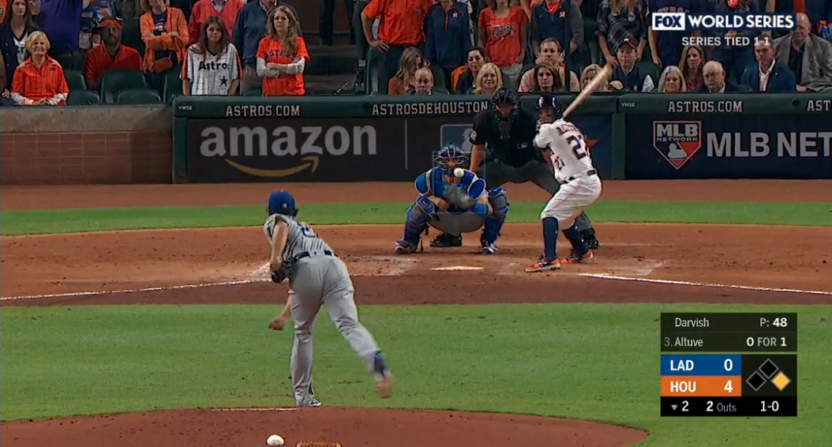 The Los Angeles Dodgers’ Yu Darvish is one of the best “stuff” pitchers in baseball, featuring a variety of pitches that are absolutely filthy when he’s on his game. On Friday night, the right-hander was anything but on his game, and that was a big problem given that it was Game 3 of the World Series against the best lineup in the majors.

The Houston Astros roughed Darvish up for four earned runs and six hits allowed in just 1 2/3 innings, the shortest outing of Darvish’s career. The upcoming free agent was lucky to even get a couple of those outs that were rockets right at Dodgers’ defenders. He only got one real swing and a miss in 49 pitches.

Darvish pummeled. Four runs in 1 2/3 innings, and just two swings-and-misses among 49 pitches — one of those a missed bunt.

Maybe Darvish was drained after throwing about 200 innings (regular season and postseason combined) this year. Maybe pitching a World Series game on the road in a crazy environment got to him. Maybe he just had an off night; they happen for every pitcher, and sometimes it’s not just a thing a pitcher can will their way through. Whatever the case, Darvish was very off, and it was quickly evident.

Like, with the first batter Darvish faced. Darvish fell behind 3-1 to George Springer, and Springer smoked a fastball for a 111-mph double.

Darvish got out of the inning without any runs allowed, but he wasn’t as fortunate in the second inning. The first batter was Yuli Gurriel, and he ripped a 104-mph homer down the left field line.

The homer was followed by a Josh Reddick double, an Evan Gattis walk, a Marwin Gonzalez RBI single, and a Brian McCann RBI single.

Finally, Darvish got an out, but on the hardest-hit ball of the inning with this Springer 105-mph lineout on a 92-mph meatball pitch from Darvish.

The next batter was Alex Bregman, and he also hit a 103-mph lineout on what appeared to be either a flat cutter or flat slider. Either way, it was very hittable, and Bregman smoked it for a sac fly.

And that was followed by Jose Altuve crushing this 108-mph double off the wall.

Dodgers manager Dave Roberts finally decided to pull Darvish, but it was probably a few batters too late (though it was understandable that Roberts didn’t want to have to use his pen so early). Darvish allowed more batted balls of 100+ mph (six) than he got outs (five).

And it was his slider that was particularly awful on the night. Here are a couple examples of what Darvish’s slider looks like on a good night:

But it was very flat on Friday night, as these charts show and Fox color commentator John Smoltz broke down on the broadcast:

What makes this awful outing from Darvish even worse for the Dodgers is that Game 4 is tomorrow and Game 5 is Sunday. The Dodgers will have to use several pitchers in this game, and had to use their best long man in Kenta Maeda for 2 2/3 innings. Left-hander Alex Wood goes for the Dodgers tomorrow, and he hasn’t thrown over six innings in a game since Aug. 15. The Dodgers’ pitching staff and Dave Roberts have their hands full over the next few games against this outstanding Houston lineup.