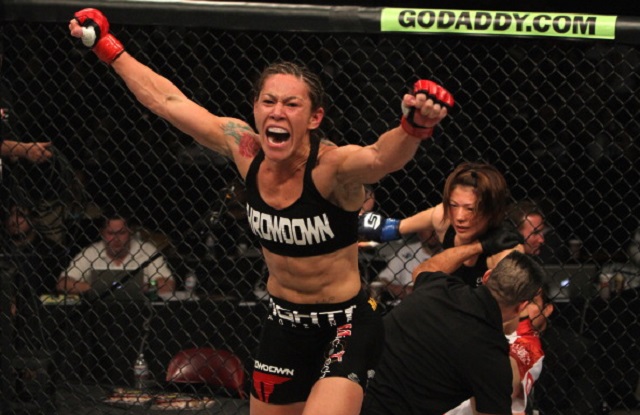 The UFC has a pretty nice little September planned. They’ll get to the Home Depot, but it’s highly doubtful there will be time for Bed, Bath, and Beyond with all these fights lined up.

This month has UFC events on each of the next four Saturdays, so let’s check out the 10 can’t-miss UFC fights for September.

Alexander Gustafsson is the No. 2-ranked light heavyweight in the UFC and the man who gave Jon Jones the fight of his life back in 2013. Many observers, including UFC fighters, thought that “The Mauler” beat Jones that night, or at least battled him to a draw. Judges gave the decision to Jones. After Jones was stripped of his title, Gustafsson fought Daniel Cormier for the belt, losing by split decision. Saturday night he gets Jan Blachowicz, a talented fighter, but not on the level of Jones or Cormier. Gustafsson’s comeback tour begins with a KO Saturday.

Ryan Bader vs. Ilir Latifi is an intriguing matchup of two ranked light heavyweights. Bader (No. 4) represents a step up in competition for the twelfth-ranked Latifi, who has been incredibly exciting in his UFC career with four first-round finishes. Bader won five straight fights before getting knocked out by Anthony Johnson in January, and he needs a win here to remain title relevant. The guess here is someone is going to sleep early in this bout.

Before the Cavs won the NBA title this year, Stipe Miocic brought a belt home to “The Land” after steamrolling Fabricio Werdum at UFC 198. He’ll make his first title defense against Alistair Overeem at UFC 203, and he’ll get to do it in front of his hometown fans in Cleveland.

Miocic is coming off three straight knockout wins, but Overeem is well-skilled wherever the fight may go, and he has over 50 professional fights. The pressure is always on in a title fight, but Overeem has been in the cage with a veritable who’s who in MMA: Shogun Rua, Brock Lesnar, Chuck Liddell, Mark Hunt, Fabricio Werdum, and Vitor Belfort — just to name a few. This will be an electric fight, and the UFC could have yet another new heavyweight champion.

The wait for CM Punk to make his UFC (and MMA) debut is almost over as he’ll take on young gun Mickey Gall at UFC 203. They didn’t do Punk any favors by matching him up against Gall, a legit BJJ brown belt who has won both of his professional fights by submission. If this fight gets to the ground, it should end shortly thereafter.

Gall told Fox Sports that he hasn’t seen anything in Punk’s training footage that makes him nervous. “He moves like food. He moves like a wounded animal. I just don’t see it in him.” Punk certainly has a puncher’s chance, but this could get ugly for him in round one.

The most underrated, under-publicized fighter in the UFC is Joanne Calderwood. The No. 7-ranked Calderwood is 11-1, the sole loss against Maryna Moroz now looking like an outlier. She simply destroyed Valerie Letourneau in her last fight, and now she gets to face Jessica Andrade, the No. 6-ranked strawweight.

Andrade is a finisher and a risk taker in the cage. She has 14 wins and she’s finished 11 of them. Both women work at a break-neck pace, each averaging about seven significant strikes per minute. This fight will fly under the radar with most fans, but this is a don’t blink/can’t-miss affair.

Sometimes when you change weight classes, you’re gonna have a bad time. Such was the case for Dustin Poirier, who dropped down to featherweight in 2014, but found his body could not handle the drastic weight cut. He moved back to lightweight and the results have been phenomenal with three first-round knockouts and a unanimous decision win over top prospect Joe Duffy.

Now he gets No. 10-ranked Michael Johnson in the main event at UFC Fight Night 94. Don’t be fooled by Johnson’s 16-10 record. He is one of the top lightweights in the world and one of the toughest outs in the game. He has dropped his last two fights, one to Nate Diaz and one to Beneil Dariush in a split decision that I will politely refer to as controversial. Before those losses, Johnson was on fire with a four-fight win streak, beating big names like Joe Lauzon and Edson Barboza. This will be an incredible war featuring an awesome display of footwork, speed, and power.

Uriah Hall will forever be known as the guy that landed the kick of death on The Ultimate Fighter. But he’s much more than that, as he proved with his knockout win over Gegard Mousasi last September. He’s had some bumps along the way during his UFC tenure, but he is undoubtedly one of the deadliest strikers in the game.

Hall will fight Derek Brunson, who was initially known as a power wrestler but has resorted to simply knocking people out. Brunson has needed just over five minutes to record three consecutive knockouts. He’s 6-1 in the UFC and has steadily climbed the rankings to No. 10. I can’t wait for this one.

There has never been a fighter — male or female — that has repeatedly imposed their will on opponents like Cris Justino, aka Cris Cyborg. Her opponents suffer brutal beatdowns. She lands almost eight significant strikes per minute. It’s almost impossible to take her down. When you watch her fight, you can feel the fear of her opponents seeping through the TV screen. Cyborg lost her pro debut, then proceeded to win her next 15 fights, 14 of them by knockout. Her opponent is Lina Lansberg, who will be making her UFC debut. Pray for her.

I could just write “It’s Roy Nelson,” and that would be reason enough to watch. Nelson is basically an anachronism, a throwback to the big-gutted brawlers of yesteryear. He walks into the arena to Weird Al’s Fat, rubs his big belly after he wins and can take a punch like no other human in the history of the world.

He’ll fight Antonio “Big Foot” Silva, a knockout specialist who holds wins over the great Fedor Emelianenko, Alistair Overeem, Travis Browne, and Andrei Arlovski. Silva has lost four of his last five and desperately needs a win. This will be an all-out war, with both fighters standing in the pocket and trading hard shots. And it will be glorious.