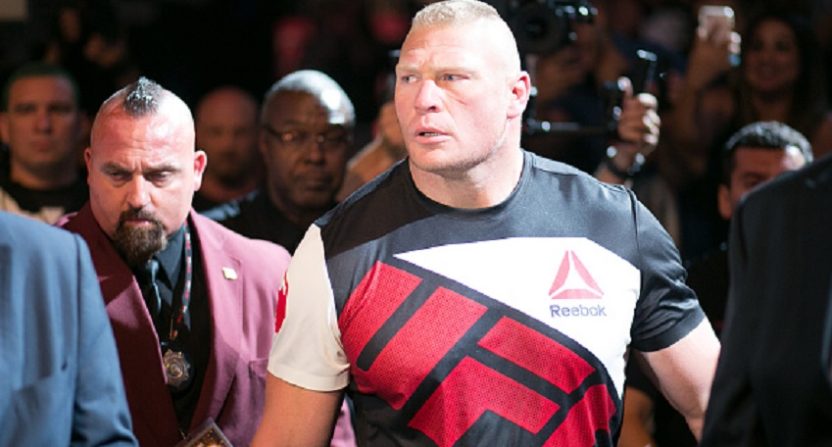 This week: Brock Lesnar may be coming back to the UFC, Cowboys legend Michael Irvin wants to fight MMA, fan gets a profane Conor McGregor tattoo and Snoop Dogg’s awesome UFC call!

The fantastic Dave Meltzer reports that Brock Lesnar has re-entered the USADA testing pool, and the only logical reason to do so is that Lesnar wants to compete in the UFC again. Meltzer wrote that Lesnar’s one-year suspension was frozen in mid-February because he formally retired from MMA and he has five more months left of USADA testing before he can compete, which means Brock could be fighting in the UFC as early as December.

If he’s matched against the right fighter — meaning a non-striker — Lesnar can still win fights in the UFC.

Retired Dallas Cowboys legend Michael Irvin is itching to get in the cage and throw someone a whooping, preferably another celebrity. Irvin talked with TMZ and told them he trains MMA and is “dead serious” about fighting. He said he’d love to do an amateur MMA fight with another celebrity.

Are you like me? Were you just thinking of all the celebs you want Michael Irvin to whoop? Tweet your ideas to him.

This Conor McGregor Tattoo Tho

New tattoo. What do you think @TheNotoriousMMA? pic.twitter.com/gCnSphWvxx

I did say I would present that without comment, but I suggest reading all the responses to that Tweet. Comedy gold.

It looked as if Denis Mutsnek had choked Nashkho Galaev to sleep at their AHB 64 fight, but the referee must have seen otherwise, even if Galaev went limp. By the time the ref stepped in to stop the fight, Galaev wakes up and the fight continues.

This just in: Denis Mutsnek is going to be really pissed for a really long time.

Soccer kicks are banned from most MMA promotions in the world because they are incredibly dangerous. A soccer kick is usually defined as kicking a downed opponent. Hiroto Uesako finished his fight at DEEP Cage Impact 2017 with what looks like a soccer kick at first glance, but it appears his opponent Koichi Ishizuka is just getting to his feet when the kick lands right on his face.

There is a debate in the MMA community about whether or not soccer kicks should be legal, but I don’t find them a necessary component in determining who the best fighters are through competition.

Jimi Manuwa is the No. 3-ranked light heavyweight in the UFC and it appears he’s not exactly a fan of champion Daniel Cormier. From MMA-Panalen via MMAFighting.com:

Manuwa has posted two consecutive knockout wins and he fights Volkan Oezdemir at UFC 214 on July 29. If he were to win at UFC 214 and Cormier were to lose, it’s possible we could see Jones fight Alexander Gustafsson for the title and perhaps then Manuwa would get a shot at Cormier. We’ll see how it all shakes out after UFC 214.

The back and forth between Jon Jones and Daniel Cormier continues, as it will until their UFC 214 title fight and most likely beyond. This week, Jones posted a picture on Instagram making fun of Cormier’s “Towelgate” at UFC 210, and he also dropped a hashtag with what he thinks of him.

All the discipline and hard work is definitely paying off, was a mean 217lbs today after practice. #NoShortcutsToGreatness #Earnit #CheatingAsshole

We’ll have a big UFC 214 preview for you next week, but here’s one prediction: Jon Jones is going to finish Daniel Cormier and get his belt back, assuming Jones is clean and ready to go.

The Eagle Has Landed… a Gut Punch to a Fan

I’ve never understood the fascination with media members and fans always asking fighters to punch them or choke them out. My guess is that most of them come from people who don’t train because getting punched and choked isn’t a very pleasurable experience.

If you’re getting choked from behind, the forearm can be placed over the trachea which not only cuts off your air supply, but is extremely painful to boot. If the choke is cinched up against one or both carotid arteries, the blood supply to your brain is diminished and you will pass out within seconds. In this video, UFC lightweight contender Khabib “The Eagle” Nurmagomedov grants a fan’s wish to be punched in the stomach.

How come no one ever asks to have the fighter do it a second time?

Snoop Dogg is getting really comfortable in his new position as UFC commentator on the alternate “Snoopcast” for Dana White’s Tuesday Night Contender Series, seen on UFC Fight Pass. This is just fun:

You can check out Snoop — and the fights — Tuesday nights at 8 ET.

Yoel Romero will have to work his way back to the top after losing to Robert Whittaker, but he’s still dying to get in the cage with UFC middleweight champion Michael Bisping. Check out this video, which looks like it was a multi-day shoot from the looks of Romero’s facial hair.

@bisping @danawhite you're "champ" is scared. I will find him and he will need the octagon to protect him. #seeyousoonboyyy pic.twitter.com/Ziq0pz3Sgj