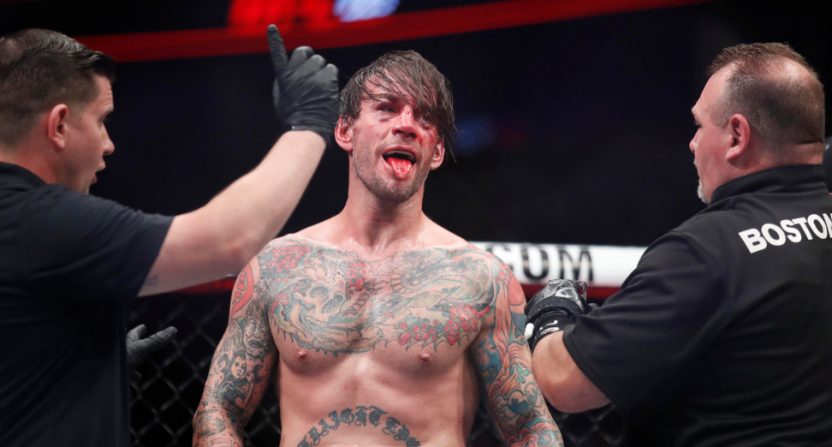 Fighting a defamation lawsuit can be expensive, even if you prevail, and wrestler-turned-color commentator and podcaster Colt Cabana (whose real name is Scott Colton) is the latest proof of that. Way, way back in November and December 2014, Cabana used his The Art Of Wrestling podcast to do a couple of interviews with CM Punk (whose real name is Phillip Jack Brooks, and who was a long-time friend of Cabana’s dating back to their early days at the Steel Domain Wrestling Academy in Chicago) about Punk’s messy exit from WWE (transcript of the first one here), with Punk (seen above after a UFC 225 loss in June) lodging particular complaints about the medical treatment he received during his time with the organization, claiming they had him wrestle in the immediate aftermath of a concussion, misdiagnosed a staph infection and more.

That led to an $8 million January 2015 defamation lawsuit against the two from WWE ringside physician Chris Amann, which ended with a victory for the defendants in June after Amann couldn’t prove criticism from anonymous Twitter accounts with display names like “Mike Litoris” was causing him actual harm. (Seriously.) But because Illinois law (where the case was filed) doesn’t permit defamation defendants to recover legal costs, Cabana and Punk still wound up with a big legal bill of over $500,000.  And, as per Evan Moore of The Chicago Sun-Times, Cabana is now suing Punk for breach of contract and fraud, saying Punk didn’t live up to his promise to pay that bill:

Cabana’s lawsuit contends Punk promised to help him out with the legal bills they amassed fighting the defamation lawsuit. Cabana claims Punk told him in a text that he would be “100% covered.”

Punk has failed to keep that promise, leaving him with unpaid legal bills totaling $513,736, according to the lawsuit.

Cabana is asking for $200,000 in general damages, along with $1 million in punitive and exemplary damages, according to the lawsuit.

The lawsuit claims “Brooks acted with fraud, malice and oppression toward Colton, with the deliberate intention of causing Colton harm.”

It’s certainly unfortunate to see that. And it will be interesting to see what comes of this. It’s the latest negative story about Punk, who made a big move to the UFC from WWE in December 2014, didn’t fight there until August 2016 (but got a Fox Sports 1 documentary chronicling his journey), and lost that first fight badly (but gave a nice speech). He then didn’t compete for a while before losing his second UFC fight badly this June, with opponent Mike “The Truth” Jackson afterwards saying “Stop…you’re putting your health at risk.” At 39 and with an 0-2 UFC mark (and two bad defeats on his record), his future with the organization seems pretty iffy. And now he’s facing a lawsuit from an old friend as well. We’ll see how that works out.