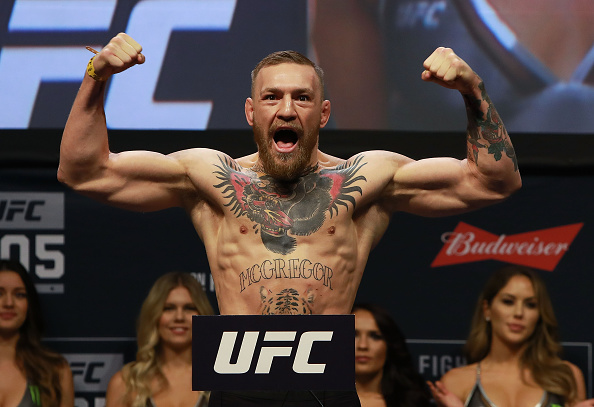 This week: Conor knocks out Floyd — at least on his new mural, a preview of the big Bellator 180 pay-per-view card with Fedor, Chael Sonnen, and Wanderlei Silva, a grotesque look at the aftermath of leg kicks, Your non-UFC Knockout of the Week, and more!

Conor Knocks Out Floyd: The Mural

Conor McGregor received a gift from SBGi founder John Kavanagh to help him prepare for his upcoming fight with Floyd Mayweather Jr. It’s a huge mural that depicts McGregor landing a vicious left hand on Mayweather’s chin. Kevin Iole at Yahoo got the story behind the artwork and the mural was created to help Conor with positive visualization.

I am a filthy Irish animal.

Conor is again working with movement expert Ido Portal and they continue to train and drill with some unique methods. Here is the “Chaotic Card Drill,” in which Ido flings cards at McGregor and he must move and adjust his body and eyes to strike the card.

Two things about this. One, whoever decided not to use Motorhead’s “Ace of Spades” as the background music should be fined, punished or both. Secondly, if they really wanted to train movement, they would have hired this guy:

After giving Mayweather propers for being 49-0 and the GOAT, Conor McGregor’s boxing coach Owen Roddy got to the real on The MMA Hour.

Conor McGregor received two ESPY nominations and Demetrious “Mighty Mouse” Johnson received one. McGregor is nominated for Best Fighter as well as Best International Athlete, while Johnson also received a nom for Best Fighter. A quick look at their fellow nominees leads me to conclude neither will be bringing home an ESPY this year.

For all you young martial artists out there, make sure you learn how to properly check leg kicks. It’s not always possible to defend them, but if you can, you should. Case in point: Frank Camacho, who made his UFC debut last week against Li Jianglang.

The good news is that their battle was awarded “Fight of the Night” honors, which netted Camacho an extra $50K. As one of my colleagues like to say, the shin bone is basically the equivalent of a baseball bat in your leg. When you repeatedly slam it deep into someone’s thigh, you get results like the ones seen above in Camacho’s tweet. So nasty.

Bellator 180 is Lit with Fedor, Wanderlei, and Chael

Bellator 180, aka Bellator NYC, goes down this Saturday night at MSG and it’s your chance (maybe your last chance) to see some of the legends of the sport do battle.

Fedor Emelianenko is back and will take on former NFL lineman and UFC fighter Matt Mitrione. Chael Sonnen and Wanderlei “The Axe Murderer” Silva will finally throw hands some three-plus years after initially being scheduled to fight in the UFC. Undefeated boxer Heather “The Heat” Hardy will make her MMA debut, as will wrestling phenom Aaron Pico.

Three titles will be on the line at the event and former UFC fighters Ryan Bader and Lorenz Larkin make their promotional debuts. It’s being billed as Bellator’s biggest night ever, and it’s hard to argue with that tagline.

Matt Mitrione got his big break in MMA by appearing on The Ultimate Fighter. One of the people he lived with during that season was the late Kimbo Slice. Mitrione fondly recalled the advice Slice gave him about how to catch your girlfriend cheating while you are traveling for your fights.

“He said, ‘For those of you who will be traveling and not sticking around, if you have any questions about your girl, I got something for you that will put your mind at ease or give you something you need to know. He looks around the room and has us all staring at him. He said, ‘Before you leave, go to the master bedroom and go to the master bathroom. Lift up the toilet seat. Wipe everything down totally clean. Bleach wipe it. When you come back, no matter how long it has been, the first thing you need to do is go to that master bathroom. If there is some piss dribble on that seat, some dude has been stepping into your bedroom.'”

By the way, Mitrione knocked out Kimbo Slice on that show. His opponent Saturday night is just a bit tougher and more refined: the one and only Fedor Emelianenko.

Your Non-UFC Knockout of the Week

Akop Stepanyan met up with Felipe Cruz at ACB 62 in Russia last Saturday, and the former Bellator fighter landed a sick knockout with a spinning heel kick.

Carla loves her cookies, so that one is self-explanatory. As for Moroz, she says her nickname was given to her by Chinese fans very early in her career. This is an important fight for the former champ as she’s coming off a loss to Randa Markos. Another loss here to Moroz and she’ll face a long trek back to contender status. Moroz has won three of her four UFC fights and a win over the former champ would vault her into the top ten.

You can see this one go down on the prelims on FS2 Sunday night.

Joe Rogan on How Conor Can Be a Folk Hero

We told you last week that contract stipulations will prevent Conor McGregor from breaking out his MMA game in his boxing match with Floyd Mayweather — at least if he wants to collect his enormous payday. Joe Rogan talked about it on his podcast.

“Could you imagine? He would be a god damn folk hero. If they got in close and Floyd was shucking and juking on the outside and he threw a jab to cover up a left high kick and that left high kick necks him? Just clang! And you see Floyd go limp – and he would go limp. He’s never been high kicked like that. Jesus, that would be crazy. Would it be worth it? It would but it would f*** everything up because no one would ever trust another fighter from MMA to ever fight a boxer in a boxing match again.”

It wouldn’t be worth it for anyone. Not the fans and certainly not McGregor. I just want to see this fight happen and get the truest result possible.