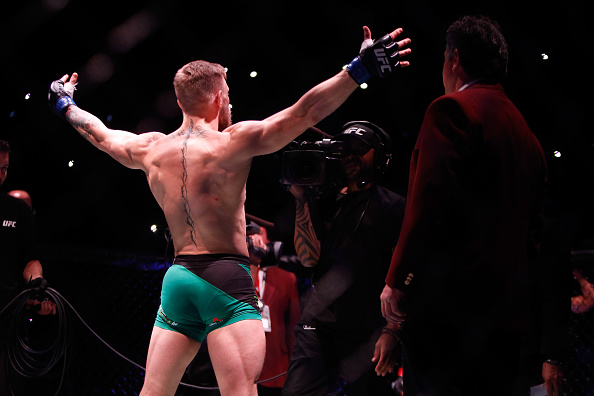 To fully understand the brilliance of Conor McGregor, you have to look beyond this past weekend.

Now, on its face, that may sound ridiculous, given that over the last few days, the UFC basically transformed Las Vegas into “McGregor and Friends: LIVE!” Just to recap, Friday night saw the finale of “Ultimate Fighter 22”, which featured McGregor as one of the two coaches. The final fight for the UFC contract? It featured Artem Lobov, McGregor’s good friend and training partner. The night’s main event? Well that was a clash between Frankie Edgar and Chad Mendes, generally understood to be a “#1 Contender” bout that would determine who received the next shot at the winner of Aldo/McGregor the following night. And then came Saturday, when “The Notorious One” ended one of the most anticipated title fights in UFC history in 13 seconds, handing Jose Aldo his first defeat in a decade, by virtue of a spectacular left hook.

So sure, the bearded, tattooed, “three-piece-suit” wearing warrior, who seems sometimes to be lifted directly from a piece of Irish Folklore, appears indeed to be connected to everything, a veritable “Six Degrees of Conor McGregor”. But to truly appreciate how perfectly the new king of MMA has positioned himself, requires a glance at the past, and the future.

The future is this coming Saturday, December 19th, when Donald Cerrone challenges Rafael dos Anjos for the UFC’s Lightweight Title. And the past? Well that was back in September, when McGregor (who else?) took over the promotion’s “Go Big” press conference, by not only berating his upcoming opponent, but also serving notice that he was not particularly impressed by the competition at a higher weight class.

“I see stiffness when I look in that 155-pound division,” noted McGregor, “Slow, stiff. I feel like they’re stuck in the mud almost… I have my eye on that 155 division and I see them all stuck in the mud in there.”

The division’s champion, dos Anjos, decided to laugh off the comments, explaining that fighting McGregor would be “easy money.” Cerrone, for his part, took a different approach, promising that if he ever had the opportunity, “I’d bend his little fucking ass over and knock the Lucky Charms out of him.”

General Mills on Line 2? I think we have a sponsorship opportunity.

And therein lies the method to Conor McGregor’s apparent madness. Because three months ago, locked in preparation for the biggest fight of his career, he was still carving out time to set up his future, to fan the flames of a potential matchup, down the road, with dos Anjos, Cerrone, or, in McGregor’s own words, “everyone up here 145 right up to 170.” As 2016 approaches, there is now not just one, but a host of big-money matchups in play. There’s a potential rematch with Aldo, there’s a fight with the veteran challenger, Edgar, and yes, at some point, there’s a jump to Lightweight, and an attempt to unify both belts by defeating Saturday’s victor. (If Cerrone emerges, don’t be surprised if the “Lucky Charms” soundbite finds its way into every promotional package imaginable.)

It’s all enough to make you think that while the rest of MMA world is playing checkers, Conor McGregor is dominating a particularly boisterous game of chess. As a fighter, he’s done everything that’s been asked of him. As a self-promoter, he’s done even more, brilliantly using his gift of gab to ensure that there’s always another lucrative contest on the horizon.

Or, as McGregor himself noted in that fateful September presser, “You’ve got to build up other schmucks, so they can one day face me.”

It’s unsurprising that in an era where an emphasis placed on “authenticity”, in our art, in our culture, and yes, even in our sports, plenty of energy is expended trying to determine which is the “real” Conor McGregor. Is he the trash-talking instigator troll who appears in promotional press conferences and media opportunities? Or, is he the thankful, gracious, contemplative champion who surfaced post-fight following each of his last two victories?

But to spend too much time obsessing over which version of McGregor represents his “true self” is to almost miss the point. While some might call his grandiose theatrics an act, others could consider it part of the job description, every bit as important to a mixed martial artist’s career as his standup or his grappling ability.

The reality is that combat sports exists, uniquely, at the nexus of athletic ability and notoriety, with both sides quite important to a fighter’s sustained success. McGregor’s European compatriot, middleweight Michael Bisping, is himself a skilled talker, but has been unable to string together enough victories to compete for a championship. On the other end of the spectrum, Demetrious Johnson is the only Flyweight Champion in the UFC’s history, having now reigned for over three years. But without the same electric personality, or knack for capturing the public’s attention, Johnson has been unable, to this point, to approach the same level of superstardom.

Though he hails from across the pond, Conor McGregor has demonstrated an innate understanding of that most American of principles: Fame is our truest currency, and staying in the spotlight the most important of skillsets.

McGregor has trained himself to be a fighter, sure, but he’s also learned plenty about how to be loved, how to be hated, how to provoke a reaction, one way or another. And when this kind of magnetic personality strings together victories, and puts a championship belt around his waist? Well then there’s just no telling how bright his star can shine.

The UFC is, as always, in the market for such a sensation, particularly given that Georges St. Pierre is still semi-retired, Jon Jones just began his road back, and Ronda Rousey is a mere mortal for the very first time. As long as he keeps winning, and cutting promos like a WWE uber-heel, McGregor has the potential to become one of the biggest drawing cards the promotion has ever seen. So, it’s probably safe to say, Dana White and Lorenzo Fertitta don’t spend too much time lying awake at night worrying about how “authentic” McGregor’s persona is. This is still sports, after all. What happens on the court, between the lines, or yes, in the octagon, is real. Everything else is just one big sales job.

Wouldn’t you know, plenty of people are learning from Conor McGregor’s style. Take, for example, Max Holloway, a Hawaiian Featherweight who was victorious on the undercard of UFC 194, defeating Jeremy Stephens via unanimous decision. Afterwards, Holloway decided the time was right for he himself to do a little post-fight positioning.

“I’m the one guy to actually give him a fight,” said Holloway, who fell to McGregor back in August of 2013 via unanimous decision, “They’ve got this guy going around, got the belt, and no-one can handle his left hand. If you watch back to our fight, one guy fell down, and his name wasn’t Max Holloway, so, I’ll leave it there.”

Holloway, who now holds an eight fight win streak, was indeed the last man to take McGregor the distance, and so, despite the fact that the judges’ scorecards were not in his favor, one can hardly blame the young man for seeking another shot, particularly when there is big business to be done. “Holloway vs. McGregor 2, Croke Park,” he added, “I think we sell that place out.”

Will it happen? Only time will tell. Could the fight deliver? Impossible to predict. Does Holloway actually stand a chance against the new face of the UFC? There’s no way of knowing. But hey, give the guy credit for trying to set himself up for the future.

“The Notorious One” couldn’t have done it any better himself.