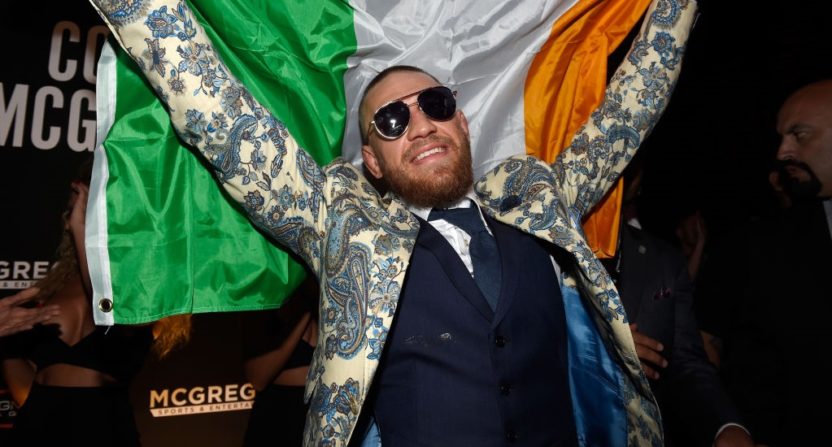 UFC icon Conor McGregor stepped outside the octagon this year to go toe-to-toe with boxing legend Floyd Mayweather. It was McGregor’s first big chance to take the lead in promoting himself as a star attraction. Now, McGregor says he will not return to UFC unless he gets the opportunity to market himself as a co-promoter.

“I was promoter on the Mayweather fight, and we’re in current negotiations,” McGregor said in a public Q&A in Dublin, according to USA Today. “I ain’t stepping in that octagon again unless I’m part owner of the whole setup – I’m a promoter.”

We have not seen or heard too much from the outspoken McGregor since losing the boxing match against Mayweather, but that does not mean he’s been idle in the months following the fight. Like a lot of big time fighters, McGregor has developed his own brand with McGregor Sports and Entertainment and he continues to work on expanding his reach on that end in addition to thriving in whatever ring he steps foot in.

And after the experience of going through the production leading up to the Mayweather fight, McGregor seems to have learned a thing or two about promoting and envisions himself getting more involved on that front while evaluating his next move inside the ring.

“They’re trying to get me back before the end of the year to make the company money so they can re-service the debt after the big $4.2 billion sale and all this bollocks, and I’m sitting there watching them type of wars I came through, back-to-back-to-back, and watching how I got there, and I’m like, I need to take my time here,” McGregor explained, alluding to the UFC sale that went down over the summer. “I’m in no hurry. I’m in a great position. I’m in the forever money stage now. My money is up there rattling around in the money counter machine, so I’m good.”

McGregor has never been one to shy away with his confidence, nor should he. He has proven himself to be a valuable commodity in the fighting game and has taken his came to the octagon and boxing ring with good financial results. The thought of a rematch with Mayweather remains hanging out there after a better-than-expected bout earlier this year.