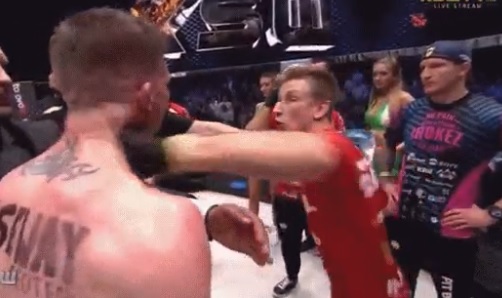 This week: Michael Bisping sued for alleged beat down, NHL player lands MMA punch on the ice, Dana White has the MayMac PPV numbers, and much more!

Your UFC Lawsuit of the Week

Don’t get too excited — this won’t be a regular feature. But when the UFC middleweight champ is getting sued, we have to mention it.

Michael Bisping is being sued by a man for allegedly choking him at a 24-Hour Fitness back in July. The plaintiff, Antonio Georgakopoulos, said Bisping attacked him for “taking his weights” without asking, according to a TMZ report.

I already think this is a bunch of hogwash. How? Georgakopoulos said Bisping called him names including a “little punk” and an “idiot.” Bisping can’t get into any type of confrontation without dropping multiple F-Bombs, and sometimes even worse. So when Bisping says this is “Total bollocks,” I believe him.

Ducks player Kevin Bieksa paid homage to MMA or WWE — depending on which fandom you talk to — by landing a Superman punch on the Flyers’ Radko Gudas. It was a one-and-done affair and certainly well-executed by Bieksa.

But my favorite part is the arguing between MMA and WWE fans. The Superman punch is a common occurrence in MMA fights. WWE superstar Roman Reigns uses it as a go-to move in the squared circle. MMA and WWE fans argued about the origin of the punch, and which sport it came from.

Shake the Kryptonite out of your head. The origin of the Superman punch…wait for it… is from Superman. And while he would have excelled in either the UFC or WWE, he did it battling evildoers, not in any mere mortal sports league.

Gerald Harris had himself a solid professional MMA career that included stops in the UFC and WSOF, and he also fought in Japan for DREAM. He decided to call it a career before his fight last week, opting to hang up the gloves just weeks before his 38th birthday.

Harris went out in style with a win and we’re going to show you the highlight. But if you’re eating, finish that bite before hitting play lest you spit that food all over your phone or monitor. This is plum nasty. Check out this massive slam that breaks the arm of opponent Matt McKeon.

McKeon was just 4-4 before the fight and was knocked out in his last fight by a 2-2 fighter. I’m not sure how the state commission saw fit to make that match.

Pro boxer Heather “The Heat” Hardy made the move to MMA this year and won her debut at Bellator 180 in June. She faced Kristina Williams at Bellator 185 last week and it was quite a different story. Hardy had her nose completely wrecked after taking mulitple kicks to the face.

Hardy learned the hard way about putting your head down like that in an MMA fight. Meanwhile, Kristina Williams put on a show and a kickboxing clinic all-in-one. She looks like a prospect to watch.

Cowboy Cerrone Gets Thrashed by Darren Till

Fan favorite Donald Cerrone was hoping to hand Darren Till the first loss of his pro career last week but like Heather Hardy, he went home with a broken nose and smashed face.

The beginning of the end! @DarrenTill2 with the beautiful combination that led to the finish! #UFCGdansk pic.twitter.com/BxGUbNI3W3

They say speed kills. Speed plus accuracy obliterates. Till is just 24 and remains undefeated at 16-0-1. Beating Cerrone is big, bright, beautiful feather in his cap. The win moved him into the UFC rankings for the first time and he moved all the way up to eighth in the welterweight division. He just beat one top-ten fighter. He probably needs two more of those to get the title shot. Keep your eye on him.

Former UFC fighter Norman Parke fought Mateusz Gamrot at KSW 40 in Poland last week and he got busted up pretty good by both his opponent — and his cornerman. Parke started the mini-fracas by pushing one of Gamrot’s corners. A different cornerman saw it and let Parke have his left hand.

It’s all completely unprofessional. Fighters shouldn’t be putting hands on opposing cornermen and vice-versa. All that said, I enjoyed it.

Dana White appeared this week on The Wall Street Journal‘s The Unnamed Podvideocast with Jason Gay and told him that MayMac fulfilled the prediction that it would break the pay-per-view record. White said 6.7 million people purchased the pay-per-view worldwide, which broke the record in the United States and other countries.

It’s just a testament to the greatness of Conor McGregor. Whether you love or hate him, McGregor talked the world’s biggest payday out of retirement at age 40, then gave him a good fight for a few rounds before the master took over. That said, I hope we don’t see the rematch. But if there is a McGregor vs. Malignaggi boxing match, I’m watching. I’m not paying $100 or even $60 to see it, but it’s worth a night out at a bar/restaurant for a nominal fee.

But most importantly, McGregor should go defend his title in the UFC’s lightweight division. It’s been just short of a year since McGregor last fought in the UFC and won the title. Out of respect for the rest of the contenders, he needs to be available soon after the calendar turns to 2018.

UFC’s Bhullar Hopes to Wear Turban at Next Fight

UFC fighter Arjan Bhullar is a former Olympic wrestler and also a man of the Sikh faith. As such, he wears a turban as an expression of that faith, but he was not allowed to wear it during his walk out to the cage at UFC 215. He spoke with MMAJunkie and told them hopes that the UFC has a change of heart for his next fight.

“If they realize, it doesn’t conflict with Reebok athletes code for clothing. I brought it up, and it’s getting bounced around beyond that. Moving forward, I’m hoping to make it a reality. Not only that, but bring some awareness to what that’s about. There are obviously others out there who do not understand what that means for a culture like ours. As an athlete, I want to do more than just compete in the cage, so there’s a perfect scenario for me.”

Bhullar is also the first fighter of South Indian origin in the UFC and he has a professional MMA record of 7-0.

The UFC is in Brazil for UFC Fight Night 119: Machida vs. Brunson and we’ve selected Antonio Carlos Junior, aka “Cara de Sapato” vs. Jack “The Hammer” Marshman for our MMA Nickname Battle of the Week.

Antonio Carlos Junior’s nickname translates to “Shoe Face,” and this marks his second time in the prestigious MNBOTW. He was the TUF Brazil season three winner, and he’s currently riding an impressive three-fight winning streak. His nickname isn’t all that fair, but it’s definitely cool. “The Hammer” gets negative points — as do all fighters — who recycle and reuse nicknames.

There was, of course, Hank Aaron in baseball, and UFC Hall of Famer Mark Coleman was also known as “The Hammer.” Marshman is fun to watch when he fights, full of aggression and passion. He received the nickname from his coach at age 15, so we’ll give him a bit of a pass. You can catch this one on the preliminary card on FS2 this Saturday night. Which leads us to…