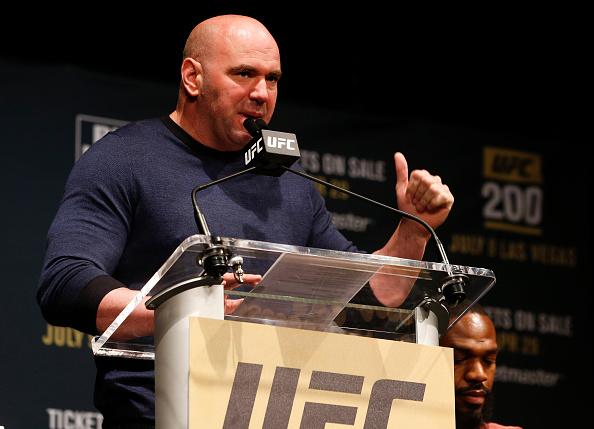 If Floyd Mayweather and Conor McGregor are going to fight, UFC president Dana White would likely be the one to make it happen. And after Mayweather said on ESPN’s “First Take” he would fight McGregor for a guaranteed $100 million while McGregor would make only $15 million, White countered with a “real offer” on Fox Sports 1’s The Herd.

If Mayweather and McGregor are going to fight, White has to sign off on it, as McGregor is under UFC contract. White also took the time to bash Mayweather’s ego.

Here are his full comments:

“This whole thing is so weird. First of all, let’s cut out the BS right from the get. He hasn’t talked to anybody about this fight. If you’re talking to somebody about the fight, you’re talking to me. I’m the promoter. Conor McGregor is under contract with me. And to say that Conor McGregor hasn’t made $8 million or $10 million in a fight, wrong again. And to think that you’re the A-side. The last major fight that you were in, you left such a bad taste in everybody’s mouth that nobody wants to see you again. His last fight did 350,000 pay-per-view buys. Conor’s last fight, Conor did a million-three and a million-five pay-per-view buys. So I don’t understand how you think you’re the A-side. And there’s a reason that you want this Conor McGregor fight so bad, because you know that’s your money fight. And if they’re gonna box, Floyd looks at this thing like an easy boxing match for him. But Conor McGregor is his money fight. To offer $15 million. I’ll tell you what Floyd, here’s a real offer. And I’m the guy. I’m the guy that can actually make the offer, and I’m actually making a real offer. We’ll pay you $25 million, we’ll pay Conor $25 million, and then we’ll talk about pay-per-view at a certain number. There’s a real offer.”

If White is actually onboard, now it’s up to Mayweather. Is he willing to go through with this not as the A-side fighter?

UPDATE: Floyd is not into the deal.

After being accosted by TMZ, he called White “a fucking comedian” and then persistently showed off his watch.