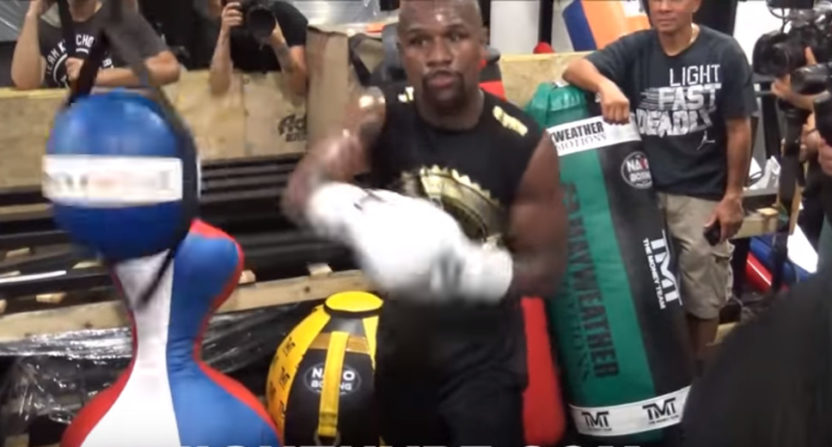 Recently, we’ve seen stories about the UFC’s push for a massive new TV deal not gaining much traction and stories with UFC president Dana White suggesting that boxing star Floyd Mayweather might come out of retirement to join the mixed martial arts promotion.

According to Mayweather himself, those stories are connected; he claims he’s not going to join the UFC or fight Conor McGregor again under MMA rules, and says White is only mentioning him to try and bolster the promotion’s TV contract.

Here’s an interview with Mayweather where he addresses that, published by FightHype.com’s Ben Thompson Friday:

Oscar Willis of The MAC Life has a transcription of the key parts:

“Their deal with Fox is coming to an end,” Mayweather said. “So they’re trying to renew a new deal with a new company, and what better name could they use than Floyd Mayweather? Because that’s a great name to use. I would use a Floyd Mayweather so I could leverage also and say ‘you know what? Floyd’s gonna come back, he’s going to fight in the UFC’. Floyd’s gonna come back and he’s gonna fight McGregor in the Octagon. So they can leverage and get another big deal.”

“I don’t have anything against Dana White. At all. He’s a remarkable guy, a very, very smart guy. Smart business man. I don’t need to fight again. If I chose to fight in the Octagon, I’m choosing to fight in the Octagon because that’s what I want to do. … If it didn’t come from my mouth or Al Heymon’s mouth, then it’s bullshit. It’s bullshit.
… So I’m not fighting, I don’t have no boxing opponent I’m looking forward to. I’m not calling no names out in the sport of box. I’m not calling any names out in the UFC.

Granted, fighters and promoters make plenty of claims that don’t stand the test of time. Long before Mayweather-Pacquiao and Mayweather-McGregor, there were plenty of comments from fighters, promoters and media members about how those fights would never happen. And Mayweather doesn’t completely commit to never joining the UFC here, saying only he doesn’t “need to fight,” he isn’t planning to take up MMA at this time, and “If I chose to fight in the Octagon, I’m choosing to fight in the Octagon because that’s what I want to do.”

But it’s definitely interesting that he’s being this adamant about not heading to the UFC, and that he’s accusing White of using him for TV negotiation reasons, which would be an odd claim to make if he was actually planning to join White.

Mayweather’s case that White’s comments about him may be related to the TV contract has some logic behind it, but it also has some flaws. If Mayweather ever did join the UFC, it’s hard to imagine him fighting on anything but a pay-per-view given his prominence. The TV deal is about the lower-down fights, and TV executives know that.

But White does have strong reason to try and play up the overall UFC brand amidst these negotiations, and some of the TV deal may be more about networks’ eagerness to work with the promotion overall. And there could be an indirect effect from bringing in a big name like Mayweather; that might bump some other top fighters from PPV down to TV.

Overall, Mayweather probably isn’t heading to the UFC (and it’s notable that even White’s comments on that have been more “don’t rule it out” than “it’s happening”), and White’s comments probably aren’t going to affect the TV deal much unless there’s something tangible that results from them. But this public back-and-forth between Mayweather and White over this is certainly interesting, as is Mayweather specifically mentioning the UFC TV deal.

It’s not every day you hear a prominent athlete accuse a league executive of mentioning him just to try and earn a bigger TV deal.