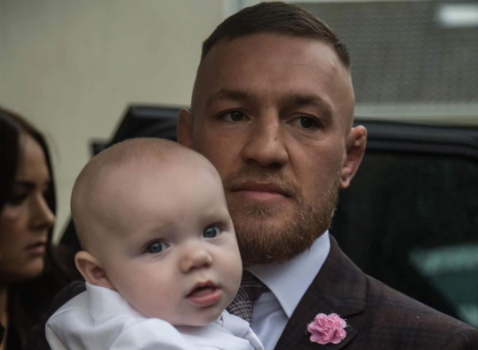 Conor McGregor turned Luttrellstown Castle in Dublin into a magical place called Mac Land for Conor Jr.’s first birthday party. There was a petting zoo, fireworks, mimes, and carnival rides — including a Ferris Wheel. Conor Sr. shared some pictures of the event to his Instagram account. Be amazed.

A great day for my little man! #Blessed @ginger_beard_photos

Paulie Malianaggi said his advisor Al Haymon has spoken with Dana White about putting together a fight with Conor McGregor. Malignaggi came out swinging claiming that the only reason the fight wouldn’t happen is if Conor has no balls.

“There’s no more Mayweather fight, this fight is the biggest fight there is. So once they told me that I said ‘All right, the only way this doesn’t happen is if this guy has no balls — which wouldn’t surprise me because he has no balls — but what I’m saying is, the way they’re going to present it to him, it’s going to be presented in a way where he really shouldn’t turn it down.”

You can check out the full interview:

Cody Garbrandt joined ESPN’s Five Rounds and didn’t mince words when it came to how he would fare against Conor McGregor in a boxing match.

“No ill will towards the guy but I actually believe I’m a better boxer. I feel like I’m one of the best boxers in the UFC.

“I’ll go in there and knock Conor the f*** out in a boxing ring, just to be honest. There’s no difference, southpaw, orthodox, that guy could come out and fight on his hands for all I give a f***. I would knock him out, that’s it. I have the best boxing in the game, in the UFC, and I’m ready to showcase it on another level.”

That’s not a fight that will ever happen due to their weight differences, but you can watch Garbrandt against TJ Dillashaw in an epic grudge match at UFC 217.

Former Cowboy and Panther Greg Hardy has been training with the renowned American Top Team and is set to make his MMA debut on Nov. 4. While Hardy has had some serious charges against him in the past, it would seem martial arts is doing for him what it does for a lot of people — providing much-needed perspective and humility in his life. Hardy spoke on The MMA Hour in February about how different life is for him now.

“It’s helped me a lot of ways. I have a lot of problems as a human being. It’s not something that you do, just walking around saying ‘I’m perfect’ or ‘I’m good.’ Man, I have a lot of different issues that I’m definitely working through and working on. I would say this helps me channel everything. It helps me just come back down to Earth, be humble, because these are machines that I see every day. I get choked out, punched in the face, and laid out on the mat daily, and that’s not something that a guy my size and my stature with my history has ever come across.

“It’s a humbling experience, man. Actually, it’s making me really appreciative of everything that I’ve had and everything that I have, and the opportunity that I have to kinda come in and show myself as a guy that is not what everybody says on TV, or, ‘he’s not a monster, he’s not a killer, a women beater,’ this, that and the other. It gives me an opportunity to just come in, be a humble guy, and learn, and honestly just be at the feet of all these champions who walk around like they’re just normal guys … and have the opportunity to make myself better one more time, one last time in sports and life in general.”

You’ll often hear martial artists describe how MMA or Jiu-Jitsu changed their lives and even saved their lives. Training martial arts will humble you. Hardy has found that out. Here’s hoping he sticks with it even if he can’t make a career out of it.

UFC light heavyweight Jim Cummins is out of UFC 217 with what he calls a “mutant staph infection.” Punches and kicks hurt but nothing is scarier than a blood infection that isn’t responding to antibiotics.

Opponent Corey Anderson was none too pleased about the development.

It’s always tough when someone bails on a fight, but at least it left the UFC plenty of time to find a replacement. Had Cummins waited until fight week, the odds of finding a replacement would shrink considerably. Hopefully, Anderson still gets to fight and Cummins gets healthy.

Michael Bisping is one of the kings of trash talk. This was further proven this week when he even got mild-mannered Georges St-Pierre to unleash a serious of F-bombs, something completely out of character for him. Here’s the video:

These two will meet for Bisping’s middleweight title on Nov. 4 at UFC 217, an event that is absolutely stacked and includes three title fights.

Mackenzie Dern is a Jiu-Jitsu champion who made the transition to MMA a few years ago. She’s beloved on Instagram with over 420k followers, but don’t let that bright smile fool you. She’s an absolute killer on the mats and in the cage. She improved to 4-0 with yet another submission win last week at LFA 24, but this time it was her striking that helped her get the finish.

Dern will eventually make her way to the UFC, and the guess here is sometime in 2018.

Vitor “The Phenom” Belfort announced he will fight in the UFC for the last time against the dangerous Uriah Hall on Jan. 14. Now 40, Belfort won his first UFC fight at the age of 19. He has fought many of the greatest fighters in MMA history including Chuck Liddell, Wanderlei Silva, Randy Couture, Alistair Overeem, Anderson Silva, and Jon Jones. He is known for his aggressiveness and violence in the cage.

Let’s take a look at some of his best knockouts. The first highlight shows his brutal knockout of Marvin Freeman, who was left with one of the most disgusting gashes ever seen in the fight game.

The UFC is in Gdansk, Poland for UFC Fight Night: Cerrone vs. Till and we’ve settled on Artem “The Russian Hammer” Lobov against Andre “Touchy” Fili for our MMA Nickname Battle of the Week.

Lobov trains with Conor McGregor and fights out of Dublin but he was born in Russia. Hence “The Russian Hammer” nickname. He hasn’t done much hammering in the UFC however, with a record of just 2-3 with no finishes. Andre “Touchy” Fili has one of the all-time nicknames and he still has some untapped potential at age 27. The Team Alpha Male fighter is 4-4 in UFC competition and needs a win here to remain relevant. His speed should be the difference in this one.