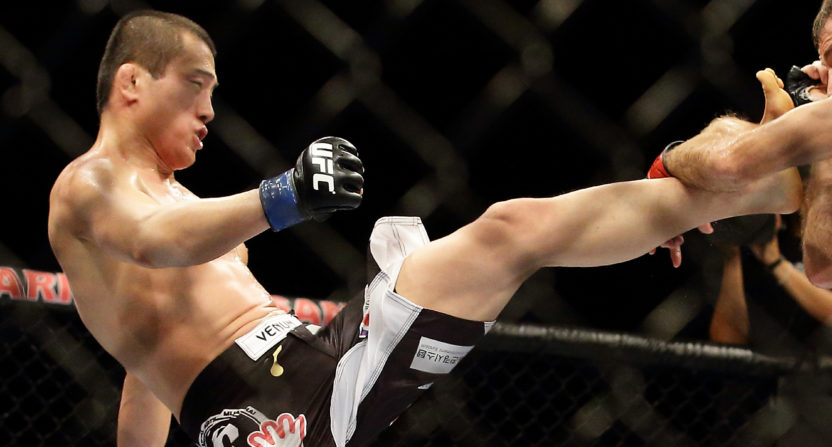 Here’s an odd story. Former UFC fighter Tae Hyun Bang was sentenced to 10 months in jail in South Korea for match-fixing, after Bang agreed to throw his UFC Fight Night 79 bout with Leo Kuntz for what seems a surprisingly small amount.

A fighter received jail time this week in South Korea for his role in a UFC fight-fixing scandal.

Tae Hyun Bang was sentenced to 10 months by the Seoul Central District Court for taking $92,610 (100 million won in South Korea) to throw a fight against Leo Kuntz at UFC Fight Night 79 in Seoul in November 2015, according to the Korea Herald. Three people who gave the money to Bang also got jail terms.

What’s especially odd about the case is that Bang is being jailed for agreeing to take a dive in a fight he actually won:

“The crime of match fixing damages the credibility of sport, and in international matches, it has a bad effect on the country’s credibility as well,” the court said. “Bang had an obligation to play the game fairly, but he ignored it and took an important role in the scheme. But we did take into consideration that Bang won the bout and returned the money afterwards.”

Bang, 34, reportedly agreed to lose the first two rounds — and the fight — to Kuntz. But the fighter apparently changed his mind. Bang ended up winning a split decision. His change of heart reportedly came due to a warning from UFC officials about fight fixing after the betting lines on the fight changed drastically leading into the event.

Obviously dabbling with this kind of corruption is still worthy of jail-time, and anything that undercuts the integrity (perceived or otherwise) of a sport is a massive danger zone for that sport. But a fighter agreeing to throw a match and then backing out of that agreement while he was in the ring and going for a win? That’s crazy, though not unheard of. Ernest Hemingway wrote a story touching on similar things almost a hundred years ago, after all.

Though in that story there was $50,000 at stake, so apparently the price of doing illicit business has actually gone down since then, once you take inflation into account.

Bang was recently released by the UFC after going 2-3 for the promotion, and it’s obviously unlikely he’ll be competing in any sanctioned fights any time soon.