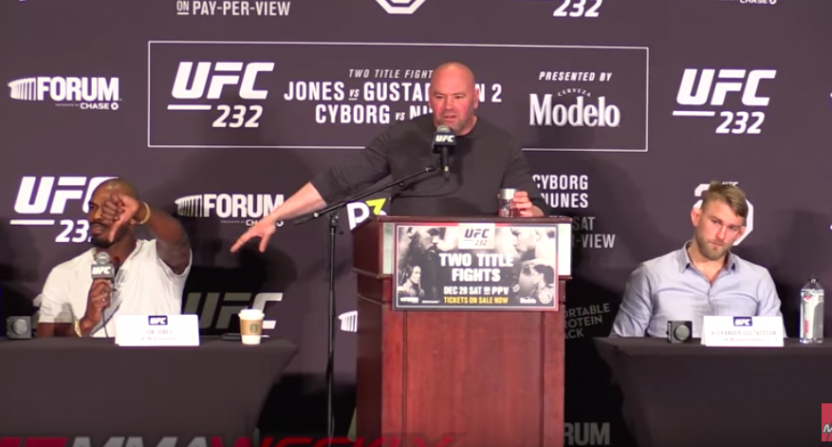 To say that MMA fighter Jon Jones owes someone an explanation for why he continues to mar UFC events by failing drug tests would be an understatement. Once considered the best pound-for-pound MMA fighter in the world, Jones’ reputation sank to new lows last week when a recent drug test revealed a residual amount of turinabol, a steroid metabolite, in his system. In order for Jones to be able to fight, UFC 232 was moved on short notice from Las Vegas to The Forum in Los Angeles.

Jones, who previously failed two drug tests and served suspensions for both, remains scheduled to fight Alexander Gustafsson over the weekend. Even though the USADA ultimately ruled Jones’ two previous positive tests were not intentional doping, and this most recent result could be residual and not because of any new doping, the stink of cheating looms large over him. As such, it’s only fair that he should expect to be asked about, especially at a press conference for his upcoming fight.

During the press conference, reporter Izabelle Kostic asked Jons why he continues to test positive for doping and whether its fair to the other fighters who get overshadowed by the controversy, to which Jones responds by saying, “next question please, thank you.” Kostic wasn’t done and she then asked UFC President Dana White why the company decided to not only keep the fight scheduled but also moved the entire event just to make sure Jones could fight, rather than giving him a suspension as other fighters have been given.

It’s unclear what ‘better journalism” would be in this case, considering what she was doing was the very basis and nature of journalism. But of course, that’s not actually what Jones meant. He just didn’t want to have to answer for his actions, be they recent or seven years ago. He’d rather get smoke blown up his ass and pretend the UFC hasn’t just bailed him out from yet another mistake. Credit to Kostic for standing her ground and continuing to try to get sorely needed answers even when it was clear none would be offered.

It’s also hard not to note the gender dynamics involved and wonder if Jones would have been as dismissive to a male reporter. Would he have told them to “sit down?” Regardless, the optics are a bad look and the whole reaction is a bad look.

Jones has spent a lot of time trying to convince everyone that he doesn’t care what people think about him and his failed drug tests. Of course, actions speak louder than words. And Jones’ actions of talking down a reporter for asking a legitimate question say more about him than any puff piece or boilerplate quote he’ll try to cover this up with.