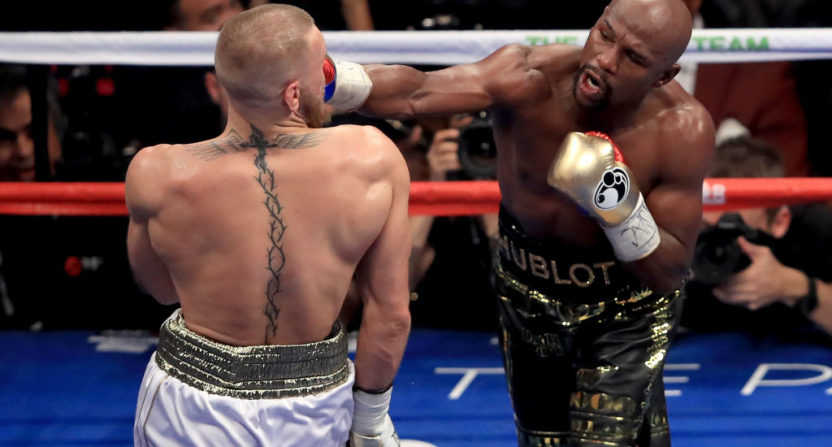 The fight between Floyd Mayweather and Conor McGregor was destined to disappoint, if only because the hype was as sky-high as any boxing match in recent history. It didn’t help that promoters spent much of their time beforehand promising record-breaking numbers and paydays.

While the fight itself ended up being better than expected (assuming you expected McGregor to get knocked out quickly), the financial take from the live gate failed to meet expectations.

The junior middleweight fight at the T-Mobile Arena in Las Vegas pulled in a live gate of $55,414,865.79, according to figures released by the Nevada State Athletic Commission.

That’s impressive, but it is not the record-breaking number promised on multiple occasions by Mayweather Promotions CEO Leonard Ellerbe and UFC president Dana White (White even said the gate would end up around $70 million).

The record still belongs to the 2015 fight between Mayweather and Manny Pacquiao, which generated $72,198,500 at the MGM Grand Garden Arena in Las Vegas.

Regardless, Mayweather can take some form of pleasure in knowing that he now owns five of the top six gates in Nevada history. No. 3 all-time was his 2013 junior middleweight unification victory against Canelo Alvarez, which drew $20,003,150 on 16,146 tickets.

There’s still a chance that the Mayweather-McGregor fight could break the all-time pay-per-view record, which was set by that Mayweather-Pacquiao fight (4.6 million units sold). Showtime PPV has yet to release the numbers for the broadcast, which cost between $89.95 and $99.95 but did say that it will finish no worse than No. 2 all-time.