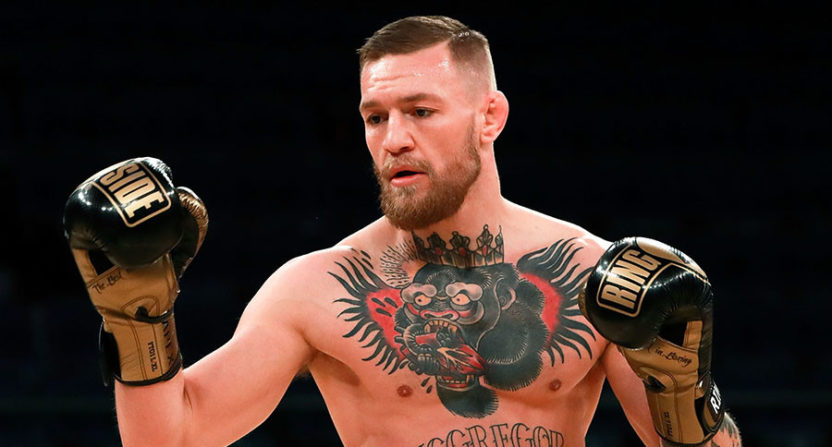 This week: Boxer reveals video of sparring session with Conor McGregor, some details from the Mayweather/McGregor contract, Your non-UFC Knockout of the Week, and more!

When all the Mayweather/McGregor talk began, Conor McGregor posted some video of his sparring session with former IBO welterweight champion Chris van Heerden. It turned out to be an edited version of their session — or in today’s parlance, fake news. Van Heerden released this version as a way to stand up for boxers, and quite frankly, it can’t hurt to show him putting it on the UFC champ.

People telling me Mayweather will have his hands full trying to land on McGregor -STOP IT! I respect McGregor BUT i ain't Floyd and i landed pic.twitter.com/gd4dFi3XUU

The scenario: Mayweather is having his way with McGregor through the first few rounds of their fight and Conor decides he’s had enough. He fires off a combo that ends with a vicious head kick, dropping Floyd and making Conor look like the biggest badass in combat sports history. That will never happen. Why? Because if Conor gets disqualified, the contract stipulates he will not get paid. Even the most casual fan knows he loves fighting, talking, and money — not necessarily in that order. Dana White confirmed those details on the recent conference call.

“There is no way that will happen. That is absolutely in the contract, number one. Number two, this is a boxing match under the rules of the Nevada State Athletic Commission. When you talk about a guy like Floyd Mayweather, the lawsuit if that ever happened…”

So any hopes of McGregor going all MMA in a boxing match have been dashed.

Max Kellerman is apparently on some talking heads show, likely on ESPN, but I don’t care enough about him to actually look up the particulars. While I respect his knowledge of the fight game, I’m not a Kellerman fan. This hyperbole is partly why.

Really? Not one punch? Original video: @brendanschaub Edited by: @as_shopped_as_it_gets_

Hey Max — if you read this, I’d love to offer you 1000-1 odds that Conor lands at least one punch. You in? This deck ain’t gonna build itself and I’ve already spent the entirety of my Comeback signing bonus… on pizza. McGregor will most certainly land a punch on Mayweather, especially since Floyd will want to counter rather than attack, at least in the first round or two.

It’s amazing that Chael Sonnen would criticize other fighters — especially those that have never been busted for PED violations — but he did just that this week with some thoughts on Ronda Rousey in an interview with Flo Combat.

“I read some stuff that Ronda put out – and I’m a personal fan of hers – but I was stunned at some of the stuff I read. It had me sitting there saying, ‘Ronda, you’re not a fighter. You understand one thing and that’s aggression. When someone is standing there who sucks, you understand how to attack that person. That is called aggression.'”

Sonnen used to get off his ass when his alarm went off — and then he’d shoot PEDs into it. It was the reason he was forced to retire and came close to receiving a lifetime ban from the Nevada State Athletic Commission. Forgive me if I’m not really sold on what or who Chael Sonnen thinks constitutes a “real fighter.” Sonnen returns to the sport for a match with Wanderlei Silva at Bellator 180 on June 24, live on pay-per-view.

Speaking of Bellator, they’ve been hitting it big on free agent signings recently, and that includes both fighters and non-fighters. Former UFC announcer Mike Goldberg and former Pride, Strikeforce, and WWE announcer Mauro Ranallo have both been signed to deals and the two will debut at Bellator 180 on June 24.

“Mike Goldberg and Mauro Ranallo are two of the best in our business and I couldn’t be happier about them joining the Bellator family,” said Bellator president Scott Coker. “In addition to June 24, we look forward to working together to make future Spike broadcasts even more exciting for our fans as we add further depth to an already-exceptional broadcast team.”

Goldberg will run the play-by-play while Ranallo handles the desk duties.

Goldberg and Ranallo were signed due to the resignation of Sean Grande, the Boston Celtics play-by-play announcer who came to Bellator back in 2015. He wrote an emotional farewell in which he described how the Bellator schedule not only increased in the number of events, but also in overseas travel. It wore the professional out and he eventually came to the conclusion that for the sake of his health and the product, he should step away.

“The rapid expansion of Bellator in that time was an amazing thing to be a part of. But, and you knew the ‘but’ was coming at some point, it was a double-edged sword for me. The deal I signed two years ago, to call 16 shows, half of which would be in the NBA off-season, would be taxing, but manageable.

You know the rest of the story. 16 almost out of nowhere became 22..23..24. A third of them overseas, two-thirds of them during the NBA season. Suddenly, Boston/Oklahoma City/San Antonio/New Orleans road trips, had intermediate stops in Torino, Italy or Budapest, Hungary. It quickly spiraled out of control.

How crazy was year two? Remember that 16 shows a year thing? This year we did 18…during the Celtics season. I ducked my head and plowed through. For the company, for my Spike teammates and mostly, for my son. I was taking red-eye flights overseas to arrive on the morning of a show. I was doing fighter interviews on bad WiFi Facetime sitting courtside in loud NBA arenas.”

You’d never know that Grande hadn’t called MMA fights before his time in Bellator. He was the consummate pro and I thought he did a fantastic job. You’ll still be able to hear him call the Celts, and perhaps he will return to MMA in the future.

Your Non-UFC Knockout of the Week

M-1 Challenge 80 went down in China this week and former Pride legend Sergei Kharitonov went up against former UFC fighter Rameau Thierry Sokoudjou, aka “The African Assassin,” in the main event. It ended quickly and violently.

Kharitonov has fought for Pride, Bellator, and Strikeforce, as well as the top kickboxing promotions. He has never fought in the UFC and that’s simply odd. He’d still make noise in that division at age 36.

“The Fireball Kid” Gomi takes on Jon “The Super Saiyan” Tuck. Gomi is a legend in MMA and he came to the UFC in 2010 after massively successful stints in Pride and Shooto. But his tenure in the UFC has been disappointing, compiling a 4-7 record and currently riding a three-fight losing streak. He’s fought just once in each of the last two years, but the UFC is bringing him back for their event in Singapore this week. “The Fireball Kid” is in reference to his penchant for delivering knockout punches, something he hasn’t done since 2012.

He’ll take on Tuck, who says he got “The Super Saiyan” nickname because he’d get bullied and picked on in his youth, but when he’d had enough he would get mad and fight back and people said he’d fight like “The Super Saiyan.” Tuck is also in a precarious position heading into this fight. He’s lost three of his last four and desperately needs a win.

Your MMA Social Media Savage of the Week

Honors for MMA Social Media Savage of the Week go to Bellator’s Michael “Venom” Page for his torching of fellow Bellator fighter Paul Daley. MVP says that “Semtex” turned down the offer to fight him in September, and that led him to throw a barrage of virtual punches at him.

Both myself and @Bellatormma are disappointed that after all the hype, Paula ‘Tampax’ Daley has once again refused to step into the cage with The One And Only MVP. ?I know I know, makes no sense 1st you get whopped Then you call MVP out Then you refuse to fight him. Sorry to the fans that wanted this fight but if he mentions my name again he’s getting ignored.

When you catch man slippin outside a fancy dress party. #Paula #Whoopigoldberg #Tampax

The Road FC fight between Aori Gele and Myung Hyun Man ended quickly in a no-contest after one of the most deadly low blows I’ve ever seen. Aori Gele is left in the crying in the fetal position after receiving what I’m calling the Crotch Kick of Death, which was also the name of my last album.