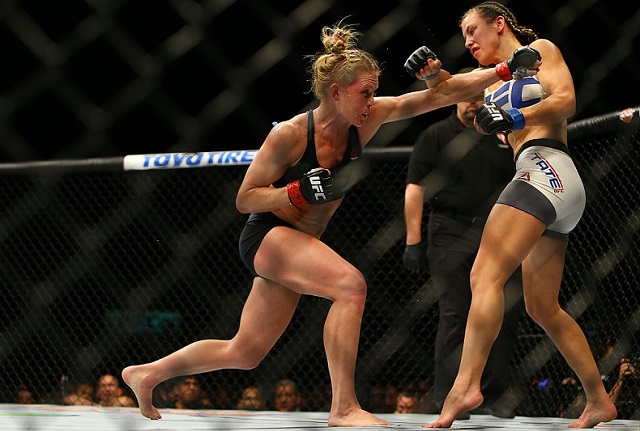 Women’s MMA has never been more popular. Ronda Rousey brought in scores of new fans with each arm she collected in the cage. Holly Holm did the unthinkable in becoming the first to defeat Rousey, achieving “America’s Sweetheart” status in the process. Miesha Tate quickly took the strap from Holm in a remarkable come-from-behind win, and Paige VanZant is fox-trotting her way into the hearts of America on Dancing With the Stars.

With that in mind, let’s take a look at the top 10 pound-for-pound women’s MMA fighters, and highlight some of the big fights that are already lined up.

Paige VanZant burst onto the scene and seemed poised to dominate her way up the rankings to a title shot. Rose Namajunas put that to bed when she delivered a beating to VanZant back in December, taking her down eight times and out-striking her by a margin of almost 6-to-1. Namajunas sealed the deal by choking VanZant out in the fifth round, and she was rewarded with a “Performance of the Night” bonus. She gets better each and every time she steps in the cage. Next up, a revenge match against Tecia Torres at UFC on Fox 19 on April 16. Torres beat Namajunas via unanimous decision when they both fought for Invicta nearly three years ago. Most fights featuring P4P fighters are must-see, but this is one in particular you don’t want to miss. The winner should get the next title shot.

Pena’s comeback from a devastating knee injury has been a great story in MMA. She tore her ACL, MCL and LCL, but returned about 18 months later to knockout Milana Dudieva at UFC Fight Night 63. She followed that up with a decision win over Jessica Eye. Pena wants a shot at the belt, and to get there she will have to beat a very dangerous fighter in Cat Zingano, who is also returning from injury. The fight is not official yet, but all signs point to Pena and Zingano throwing hands at UFC 200. Zingano has already had a title shot against Ronda Rousey, a fight that lasted just :14. Should Pena beat Zingano, she could be just one fight away from a title bout.

Gadelha doesn’t get the publicity that some of the strawweight fighters get, but that will change when she coaches opposite Joanna Jedrzejczyk on the new season of “The Ultimate Fighter,” premiering April 20 on FS1. After the season, the two will do battle for Jedrzejczyk’s strawweight title on July 8. They’ve already fought once, with Jedrzejczyk taking the fight by split decision. It is the only loss on Gadelha’s record. There’s not a lot of hype for this battle right now, but it will increase dramatically throughout the season, and it should culminate in a fierce revenge match come July.

Nunes has flown under the radar in comparison to the big names of the division. Rousey, Holm, Tate and Zingano all seem to receive more attention, but Nunes just keeps winning fights. She’s 5-1 in the UFC, her sole defeat a knockout loss to Cat Zingano at UFC 178. Since then she’s been impressive with three-straight wins, two of them featuring highlight-reel finishes. She choked out former Olympic wrestler Sara McMann in one of those bouts, a fight many thought McMann would dominate. She has nine knockouts among her 12 wins, and “The Lioness” is aptly-named. She comes to destroy, not just win a fight. Next up, Nunes gets her title shot against Miesha Tate at UFC 200.

Zingano steamrolled her way to a title shot against Ronda Rousey after going undefeated in nine fights, including devastating knockouts of both Nunes and Miesha Tate. She’s coming back from injury and as we previously mentioned, she is in line to fight Julianna Pena on what should be an epic UFC 200 card. She’ll be 34 when that fight goes down, and time is no longer on her side. With such a stacked division, Zingano must beat Pena to stay in contention. If she loses, she will likely need consecutive wins before getting another title shot. Zingano is extremely aggressive. That style led to much of her success, but was absolutely her downfall against Rousey. Pena is also very aggressive, so don’t blink when these two fight at UFC 200. It could be over in a hurry, or it could be an insane bloodbath.

Hallelujah — Cris Cyborg will finally fight under the UFC banner, debuting against Leslie Smith at UFC 198 in May. Cyborg has been the subject of much controversy, especially when it comes to PEDs. Nevertheless, she has won 14 straight fights and lost just once, in her pro debut back in 2005. She has knockouts in 13 of her 15 wins. Simply put, Cyborg is the biggest, strongest, most powerful female fighter in the game. You can feel the terror of her opponents through your TV screen. If she can continually make weight and stay clean, all roads to the title might eventually run through her.

“The Preacher’s Daughter” shocked the world in beating Ronda Rousey. It wasn’t just getting the victory, it was how it went down. Holm repeatedly battered the champion, then knocked her out with a head kick. Holm connected on 71 percent of her strikes, wasn’t taken down and made Rousey look like just another fighter. She was very close to defending her title until she veered off plan a bit. Miesha Tate seized on the opportunity — and Holm’s neck — putting her to sleep and taking her title. But Holm is no one-hit wonder. She was winning the Tate fight on the scorecards when she was choked out, and she will remain a top contender for years to come. But with Tate scheduled to fight Nunes at UFC 200 and Ronda Rousey reportedly out until November, it remains to be seen what’s next for Holm.

You could certainly make the case that Rousey should still be the No. 1-ranked women’s fighter in the world based on dominance and longevity. But it looks as if she will go at least a year between fights, and it’s not set in stone that she will ever fight again. It’s also clear that the playing field has leveled off — at least for now. Rousey may be the lead dog in the pack, but the others are no longer nipping at her heels — they’ve bit off a chunk. Here’s hoping we see Rousey many more times in the UFC. But for now, we have her at No. 3.

Tate finally got the UFC title by beating Holly Holm. It was a typical Tate performance, gritty and crafty with amazing perseverance. She’s won five straight fights and has a brand new UFC contract, set to make her first title defense against Amanda Nunes at UFC 200. I’m sure Tate would admit that while being champ has always been her goal, there is a sliver of disappointment in that it did not come by defeating Ronda Rousey. Should Rousey continue to fight, it is inevitable that we will see them do battle for a third time. Tate is a much different fighter than when they last squared off in 2013, and she is the champion. But you know she is just dying for one more shot at Rousey.

Joanna Jedrzejczyk is a dominant champion, and our pick for No. 1 pound-for-pound women’s MMA fighter. She has obliterated the very best that the strawweight division has to offer, and I don’t see her losing any time soon. Undefeated at 11-0, she landed 220 significant strikes in her last fight against Valerie Letourneau. She rearranged Jessica Penne’s face. She made Carla Esparza — the first UFC strawweight champ — look like a 6th grade wrestler. She lands about three strikes for every one she absorbs. We could go on and on, but Jedrzejczyk is the most-dominant women’s fighter in the world right now.