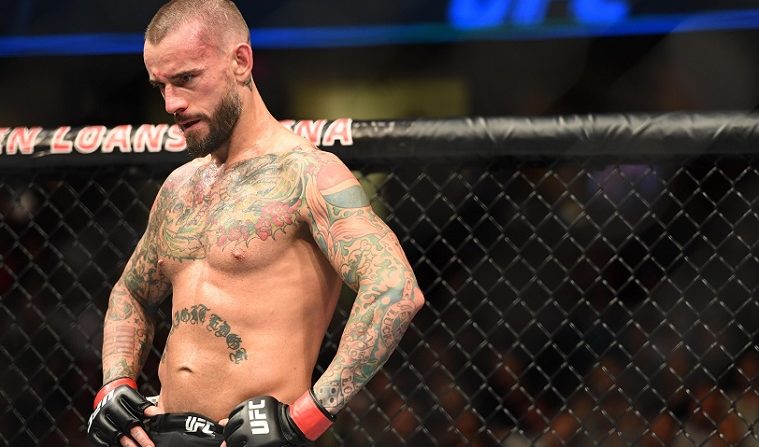 Rory MacDonald is a Warrior, and Finally a Champion

Rory MacDonald was one of the first elite fighters to leave the UFC and sign with Bellator. It was definitely an important moment in MMA and several other big names have followed him. MacDonald is known for getting in bloody, brutal fights, and it’s that will to win along with his great skill set that has made him a fan favorite.

He was in another war last Saturday night as he defeated Douglas Lima to win the Bellator welterweight title. His face clearly told the story of the severity of the battle, but it was his leg that had social media abuzz. Check out his left leg in this quick video:

This is truly a dream come true, I set out on this martial arts journey when I was 14yrs old and without any doubt I know I wouldnt be here if it wasnt for the grace of Jesus Christ. He humbled me to be ready to receive this belt. I give all the glory for this moment to Him, for my beautiful family, my friends and supporters.

MacDonald also said still had a lot of pain days after the fight and was on crutches. He was unable to fly back to Canada due to the massive swelling. MacDonald finally got his belt and Bellator might have the best welterweight in the world.

Champions derail hype trains. That’s what I wrote last week in our UFC 220 preview and Stipe Miocic did just that against Francis Ngannou in their title fight last January. Miocic dragged Ngannou into the deep waters of the later rounds and straight up tortured the challenger, who was out of gas by the second round.

Miocic set the record for consecutive title defenses by a UFC heavyweight champion with his win, but he was a bit salty over all the hype and attention that Ngannou received in the leadup to the fight. He displayed his distaste after the fight. Traditionally, the president of the promotion puts the belt around the champ after the decision is read. Stipe was not having that, instead giving that honor to his coach.

I also wrote last week that I believed people were sleeping on the greatness of Miocic. I doubt I’ll have to write that again after his amazing performance.

One FC is one of the leading MMA promotions in Asia. Fight dorks love it because they get to see the best fighters outside of North America, and their events usually start about 8 a.m. in the U.S. so they get a little “Wake and Break.” While fight fans here in the states were just waking up, Edward Kelly was putting his opponent to sleep with a slick combination of strikes.

A "Ferocious" KO just 21 seconds in, the fastest in ONE Featherweight history! #GlobalSuperheroes #Manila #MartialArts pic.twitter.com/MUZyOT9oyH

The fight lasted just 21 seconds, the fastest finish ever in a One FC featherweight fight.

CM Punk Will Fight in the UFC Again

WWE’s Royal Rumble is this weekend, but those hoping for a CM Punk return will have to wait. UFC president Dana White said he is giving CM Punk one more fight.

I spoke with Punk’s head coach Duke Roufus last week and he told me that Punk is indeed training for another MMA fight. The guess here is they won’t match up Punk with a beast like Mickey Gall this time around, and there is no shortage of people who would like to get a shot at the former WWE champion. Shane McMahon is a Muay Thai enthusiast, so let’s make that happen!

UFC middleweight champion Robert Whittaker was scheduled to defend his title against Luke Rockhold at UFC 221 but a serious staph infection caused him to withdraw from that fight. It sounds absolutely horrifying, according to Dana White.

“He had staph infection in his stomach,” White said. “From what I understand, it wasn’t treated properly and started to eat away at parts of his organs. He’s in serious condition, so it’s going to be a minute before he’s back, I think. Hopefully it turns around quick, but that stuff is life threatening if not treated the right way.”

Here’s hoping Whittaker recovers well and he gets to continue his fight career soon.

Bellator’s Aaron Pico is one of the top prospects in MMA. His shine lost a bit of its luster after he was finished by Zach Freeman in his debut. But since then he’s recorded two first-round knockouts. Last weekend, he dropped Shane Kruchten with a vicious punch to the body. A well-placed, powerful shot to the liver is basically like an on/off switch. Pico nailed it and Kruchten collapsed.

Pico is a former U.S. National and World champion in wrestling, but his striking game is looking world-class and getting him wins in the cage. Just 21 years old, Pico has an extremely bright future ahead of him.

MMA is great as it is, but it’s always much better when Nate and Nick Diaz are active competitors. Nate Diaz is apparently growing weary of posting digital middle fingers to past and potential opponents. He let the world know he’s coming back in a social media post this week.

Sick of sitting around waiting for you fuckers to do shit there’s no excitement in this fight shit step your games up I’ll see u around may,June. Sincerely The Real Champ ??

Diaz has not fought since he lost to Conor McGregor in their rematch back in August 2016.

UFC fighter Arjan Bhullar was denied in his request to wear a turban during his walk out to the arena at his last fight, but it seems common sense has prevailed. The Reebok deal was said to be the hangup when he made his UFC debut last September, as UFC fighters are not permitted to wear anything other than Reebok on fight night. Bhullar, who is a member of the Sikh faith, is excited that an exception is being made to the policy.

“As of right now, that is the plan, and we’ve got the green light for that,” Bhullar said. “It’s going to be a very special moment for all Indians.”

The turban might even be branded with the Reebok logo, similar to how Nike recently produced a hijab. Bhullar remains undefeated at 7-0 and he will face Adam Wieczorek in April.

The UFC is North Carolina for UFC Fight Night: Jacare vs. Brunson 2 and the ladies take center stage in our nickname battle of the week. Our matchup features Katlyn “Blonde Fighter” Chookagian against Mara Romero Borella, aka Kunoichici.

Chookagian’s nickname was not given to her. It actually came from her Instagram account. “It’s just my IG name and it stuck with me. More people call me that than Katlyn,” she told UFC.com. The “Blonde Fighter” has won two of her three UFC fights and the lone loss was by split decision. She’ll be making her debut in the UFC women’s flyweight division.

Borella is ranked ninth in the division and she is the first Italian woman to fight in the UFC. Her nickname “Kunoichici” means female ninja, and she certainly looked like one in her UFC debut against Kalinda Faria. She submitted Faria with a rear-naked choke just midway through the first round. You can watch this fight on the preliminary card, which begins at 5 p.m. ET on FS1.