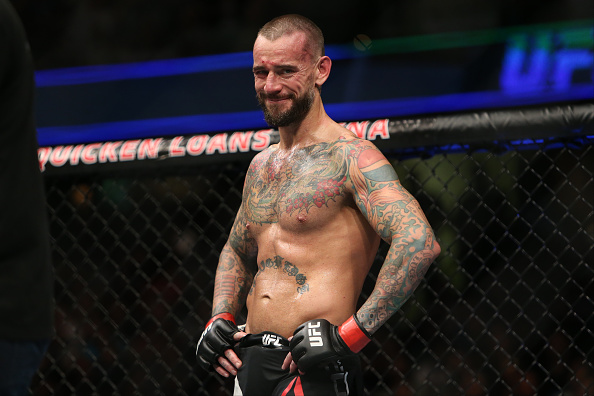 The MMA Ten keeps you updated on the latest news from the world of the UFC and beyond. This week: CM Punk vows to fight again, Cowboy Cerrone’s “eye injury,” and your Cyborg vs. Ronda update!

CM Punk finally made his debut at UFC 203 in September against Mickey Gall, but Gall immediately took him to the ground then choked him out in short order. UFC president Dana White said it’s unlikely Punk would fight for the UFC again, but on The MMA Hour, Punk says he will fight again — whether it’s in the UFC or some other promotion.

“That’s up to Dana. I had a good conversation with him, I told him, ‘If you want to cut me, I get it, but I’m fighting whether it’s for you or somebody else.’ I don’t have an agent, I don’t have a manager, I’m like Bill Murray just with a lot less money and not as funny or as famous.

“But I told him I want to fight again. We’re back at it. We’re back to the drawing board. It’s up to him and he floated me an idea and we’re kind of going back and forth on it right now. I’m at the point where I kind of want to get something on paper so you might hear an announcement in the coming weeks I really don’t know though.”

It’s simple. His next opponent should be…

Ask a fighter how their training camp is going and you’ll usually hear the same old platitudes. “Camp is going great,” and “This is the best version of me you’ll ever see'”and on and on. So it was a bit refreshing to hear Matt Mitrione on The MMA Hour be completely honest about what he’s been up to lately.

“Right now I’m kind of soft and chubby and a little bit bloated from drinking too much alcohol for a while. As of right now, I’d get my butt kicked anywhere. But by February 18th, I think I’ll be just as good as I’ve ever been, when I’m the best I’ve ever been.”

Mitrione will fight the legendary Fedor Emelianenko at Bellator 172 and he has some time to get into shape. That is definitely a fight you want to mark on your calendars. If you still use calendars. You probably don’t, so just try to remember. You’ll probably forget, so I will remind you when we get closer to the fight. It’s just easier this way.

Tim Kennedy is a fun follow on Twitter. Kennedy’s fight with Rashad Evans was canceled this week after it was already postponed once. Kennedy did what any other warrior itching for a fight would do: He took to Twitter for some callouts.

@patrick_cote hey how is the weather up there(said in Canadian accent)? Wanted to see if you were interested in getting on the Toronto card?

@SpiderAnderson I know it's been a minute since you won a fight. I might be an easy match up. Bad wrestling, horrible striking. #ufc206 ?

@vitorbelfort #ufc206 needs another flight. I'll even do a catchweight to compensate for your dad body? #postUSADA

@BrockLesnar #ufc206 needs you. I won't beat you up too bad. You could even do some hunting in Canada after the fight.

Here’s hoping Kennedy gets a fight soon. He’s not only a fun follow on Twitter, it’s fun to watch him work in the cage.

Don’t worry, fight fans. Cerrone’s eye is just fine. He shot that Instagram video on set for the Netflix series Godless, a rough-and-tough Western set in the 1880s that will be available some time in 2017. Cerrone’s UFC 206 fight with Matt Brown is still a go.

Not only does Yoel Romero land devastating knees that crack open skulls, he also plans parties. He already has his next one in mind:

If the rumors are true, I'll be hosting a retirement party on 1/21 @bisping #ynuevo

Those “rumors” are Romero getting the next shot at UFC middleweight champion Michael Bisping’s title at UFC 208 in January.

Romero is the former Olympic wrestler who has vaulted his way up the middleweight rankings and most recently destroyed former champ Chris Weidman. He is 8-0 in the UFC and has defeated some big names in his climb to top contender: Weidman, Jacare Souza, Lyoto Machida, and Tim Kennedy. Enjoy the Bisping championship while you can because its days are numbered.

Honored to help out @townhallohc for the #feedtheneed campaign! #GiveBack A photo posted by Stipe Miocic (@stipemiocicufc) on Nov 22, 2016 at 10:22am PST

He beat Miocic in 2014 by unanimous decision in a fight that went all five rounds. dos Santos is just 3-3 in his last six fights and he has absorbed a lot of punishment since losing his title. The UFC heavyweight division is filled with big boys, but it’s also running very lean these days. That division is most in need of a fresh infusion of talent.

Max Holloway: A Hawaiian Is Coming

Max Holloway wants to fight some big names. Holloway has started using his mouth as a tool more often, as evidenced by this barb he directed at Jose Aldo on SiriusXM Rush’s Toe-2-Toe.

“After this fight everything to my agenda is let me know if Aldo found that f***ing vaccine for that f***ing pussy-itis he got. That motherf***er been running. So tell him he can’t run for much longer. Tell him a Hawaiian is coming and I’m creeping. Tell him to be ready.”

Holloway has been pining for a shot at Conor McGregor or Aldo, but he first has to get by Anthony Pettis at UFC 206 on Dec. 10. Holloway has won nine straight fights and deserves a title shot sooner than later. Superfights are fun for fans, but they wreak havoc on logistics. Holloway will likely get past Pettis, and at that point he has to get a title shot.

Remember Spencer Pratt? He was that guy from that show about stuff. Actually, he was on The Hills and one half of “Speidi,” a super-cute couple combo name for himself and wife Heidi Montag.

Pratt has a killer BJJ game, and he recently confirmed via Twitter that he has been promoted to brown belt. That’s quite an accomplishment. The belt system in BJJ greatly differs from many of the other martial arts, and you can spend years at one ranking. He also recently won gold in Abu Dhabi and then hit a wrist lock to win his match at the worlds.

At one time, Pratt’s BJJ abilities and ranking were called into question, but that shouldn’t be an issue given his recent accomplishments.

Props to r/MMA for being a source of MMA goodness each and every day. A Redditor posted this amazing compilation of all the body shot finishes in UFC history.

The videos of Cris “Cyborg” Justino trying to make weight for her last fight were a tough watch. The amount of punishment her body goes through in making weight is far worse than anything she has endured in the cage. She said she’s done with that brutality, unless it’s a fight at 140 with Ronda Rousey. Cyborg was on Submission Radio this week and explained.

“You know, the first time I made 140 in Brazil, Curitiba, the first time I did it was because it would be in my city. The main thing is to do is open an opportunity, maybe to do super fight with Ronda Rousey at 140. And I just showed them that I can make 140 for a super fight. And my second fight was supposed to be 145, I was supposed to be to defend my belt. And then again, I had the opportunity to fight 140 in Brazil.

“I really respect all my opponents, but the girl in my last fight (Lina Lansberg), nobody knows her, and she’s had like 70 Muay Thai fights. She’s a really, really good opponent, but for me to sacrifice to make 140, I’d like a super fight. You know, something the fans would like to watch. Because my last opponent, her last win was at 145 pounds. And then sometimes, I don’t see it’s worth making 140 to make a fight like this. If you want a super fight, doesn’t matter the weight — It can be 150, can be 155, 145. But the thing is, I cannot kill myself at the time to make 140 for a normal fight.”

The Cyborg/Rousey saga is beginning to look like the Mayweather/Pacquiao scenario. It’s been bandied about for years and fans would love to see it. But it’s looking more and more like this fight will never happen. Rousey said recently she’s nearing the end of her career and she also said she would not go up in weight to face Cyborg. Cyborg wants the fight. The same can’t be said of Rousey, at least for now.