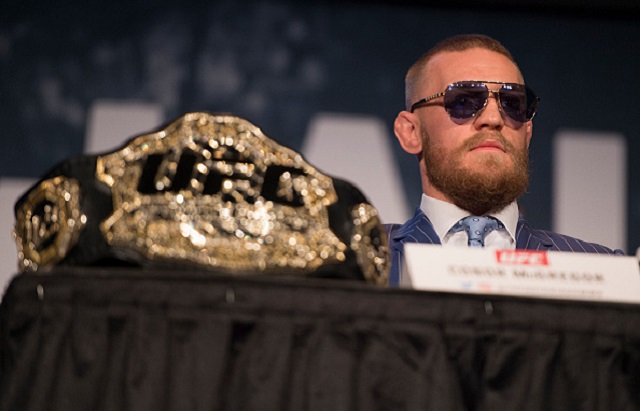 The MMA Ten keeps you updated on the latest news from the world of the UFC and beyond. This week: Is another pro wrestler making the move to MMA? Did Conor McGregor have the line of the year at the UFC 205 press conference? Is UFC 205 the best card of the year? Will Stimpy press the History Eraser button?

We’ll answer all those questions and more. The MMA Ten is here! Buckle in.

Former WWE wrestler Ryan Reeves, aka “Ryback,” was on the Into the Octagon podcast last week and said that he is in talks with Bellator MMA. A monster of a man at nearly 300 lbs., Ryback would have to fight super heavyweight or cut some serious weight to make the heavyweight limit of 265. The picture above shows Ryback after a BJJ class, and he also posted on Instagram that he is “doing a little boxing” to get himself back in wrestling shape. Disappointed with the way the WWE was using him, Ryback chose to leave the company. He’s currently doing appearances and signings and will return to the squared circle on Oct. 14 for a regional wrestling promotion.

There is no shortage of people that have gone from pro wrestling to MMA. Ken Shamrock, Bobby Lashley, Brock Lesnar, Dave Batista, and CM Punk are a few of the names. Can Ryback make the jump to MMA? Not if he continues to travel, make appearances and wrestle. He’ll never be able to absorb what he needs to learn with that schedule. 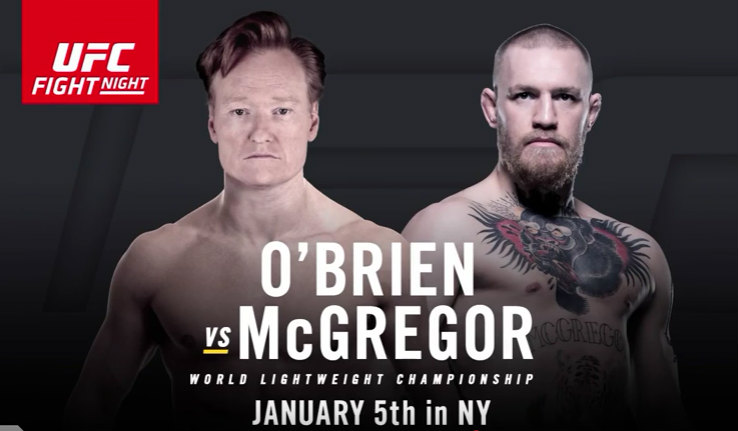 WME-IMG are the new owners of the UFC, buying the company earlier this year for $4 billion. Conan O’Brien says he is part of a group that was offered a chunk of the company because he is represented by WME. O’Brien says his share is “about $40 worth.” But he also said the main reason he invested is because he has decided to compete in the cage. He even has his first three fights scheduled. Take a look:

Conan vs. Conor? Conan might be the one guy that can zing one-liners better than Conor.

Now check out this list of celebs that are part of the investment group that bought the UFC:

Trey Parker? Can we get a South Park-like open for one of the UFC events? Cartman on color commentary? Rob Dyrdek and Guy Fieri?! Can we get them to… I don’t know, leave?

UFC 200 was supposed to be the card of the year, but UFC 205, the first UFC event in New York, might be the new leader in the clubhouse. Check it out:

There are three title fights on the main card, including the UFC strawweight title fight between two undefeated Polish fighters in Jedrzejczyk vs. Kowalkiewicz. There are also four former champions fighting on the card: Weidman, Tate, Edgar, and Evans. Stevens, Cerrone, and Johnson represent three of the most exciting fighters in the UFC. Mark your calendars now, or just write it on your hand: UFC 205 on Nov. 12. Don’t miss it.

Conor had plenty of good lines during the UFC 205 press conference, but there was one that stood tall above the rest. Conor was asked who would be the toughest fight for him out of all the fighters on the stage. Stephens grabs a mic and says that he is. Then Conor has the comeback of the year. Watch:

They Don’t Call Him Krazy Horse For Nothing

The quick backstory: Bennett was choked out by one of Wanderlei’s teammates in 2005 during a PRIDE show. Bennett claims that after he woke up from the choke he knocked out Wanderlei, although there is no video of that part. Bennett says it was edited out by Wanderlei and his team. So Bennett tells everyone how he will fight Wanderlei again, but only with a contract. (Caution: some NSFW language and… gyrations.)

Will we see a Bennett vs. Silva fight in RIZIN? Please and thank you.

I’m not sure who or what started the phenomenon of radio and TV hosts wanting to get choked silly by professional fighters. If you really want to learn, just find a school and go train. Does getting choked by a pro fighter make you a tougher guy? No. No, it doesn’t. Watch Mickey Gall let Luis Gomez start in mount, but Gall quickly reverses positions and, well, you know what’s next.

Nate Diaz is salty about Conor McGregor getting a shot at the lightweight title, instead of coming back to fight him and conclude their trilogy. Here’s what he told Ariel Helwani and MMAFighting:

“F*** them both. You know both those little bitches are afraid to fight me. That’s why they are fighting each other. And tell Dana I said get off Conor’s nuts. I left my room to that fight at 176, so when I fought I was probably 173. Quit telling people I was a monster to make him look good. I’ve been a lightweight my whole career.

“Eddie said I was next after Gilbert, then I called him a b**** in the lobby and he turned the fight down repeatedly until I beat Conor. Then he called every day asking for the fight. B****. What kinda fighters are these guys?”

UFC Fight Night 96 features a scintillating main event with bantamweights John Lineker and John Dodson scheduled for five rounds. Both fighters have moved up from flyweight, and Lineker has proven his knockout power has transitioned smoothly. Dodson has crazy speed and quickness, and the power is there. He finished Manny Gamburyan in the first round back in April, and this fight should be non-stop action from bell to bell.

The co-main event features former Bellator lightweight champion “Ill” Will Brooks, who will battle Alex “Cowboy” Oliveira. Brooks is coming off a win over Ross Pearson in his UFC debut, and you get the feeling that the best is yet to come, something Brooks has said himself. Oliveira is not ranked but extremely dangerous, and he’s won four of his last fights. You can catch the main card of UFC Fight Night on FS1 beginning at 11 p.m. ET.

There were plenty of good candidates this week, but I have to go with UFC Fight Night’s Louis “Da Last Samurai” Smolka against Brandon “The Assassin Baby” Moreno. Smolka was initially scheduled to face Sergio Pettis, but he had to withdraw due to injury and Moreno stepped in. If you’re watching the current season of The Ultimate Fighter, you might remember Moreno. He fought the No. 1 seed in his first bout and lost, but put up a good fight. Now, he’ll take on Smolka with just about a week’s notice.

You might think Smolka is from Chicago with the usage of “Da” in his nickname, but he hails from Hawaii. He is the No. 9-ranked flyweight in the UFC and he’s currently riding a four-fight winning streak. He also won a Performance of the Night award in his last fight for utter domination and knockout of Ben Nguyen.