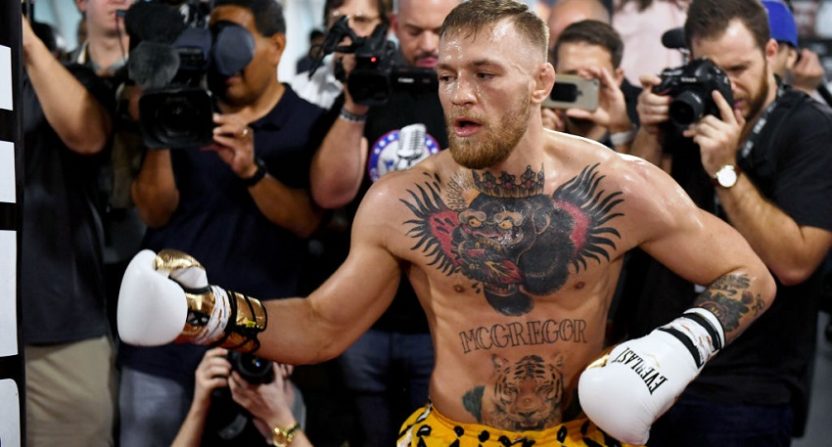 We kick off the Ten with good news for those of you who just can’t get enough Conor McGregor in your life. MacTalk is a new app that features 27 different phrases from “Mystic Mac.” For just 99 cents, you can have Conor’s voice emanating from your phone with the utterance of phrases like, “You’ll Do Nuttin,” and “Ireland, Baby.” You can even have Conor call out your coffee break.

We told you about Irish musician Mick Konstantin last week and how his “There’s Only One Conor McGregor” song went viral. Apparently, Conor himself liked it too because he is paying for Konstantin to attend the MayMac money fight next week.

McGregor told Ariel Helwani and MMA Fighting that he loved the song and he’s looking forward to meeting Konstantin at the event.

“I had my people reach out to the guy and we’re booking him a flight –- him plus one. I’m going to bring him over to the fight and get him tickets and put him up in a hotel, and I’ll meet him after the fight. It’s one hell of a song.”

The projections for the pay-per-view totals for MayMac are off the charts. The number is 4.9 million buys but UFC president Dana White said he thinks the fight will top that.

“Everything is tracking right now to say that we’re going to kill this thing,” White said.

Earlier this week Floyd Mayweather said he will earn approximately $350 million from the fight. White didn’t know or didn’t announce what he thought McGregor’s cut would be. But he did say it would be “life-changing money.” McGregor’s first words at the first MayMac presser were “Baby, we did it.” He wasn’t lying. He literally talked his way into a nine-figure fight with Mayweather.

Conor McGregor first said he would like to fight Floyd Mayweather on Conan, and this week he was back on with his fellow Irishman. McGregor repeated his prediction from the press conference tour, again saying he would work Mayweather within four rounds.

When asked by Conan to respond to Mayweather’s claim that McGregor can “go down on his face or his back,” McGregor responded by saying he’ll “Go down in the history books.”

Mayweather Promises This Is His Last Fight

Floyd Mayweather reiterated that this will surely be his last fight.

Athletes — combat sports athletes in particular — have a penchant for retiring, then unretiring, and maybe going through that process on multiple occasions. Would Mayweather really not want a rematch if he were to lose to McGregor? For another $300-400 million? We’ll see. But that kind of money can make you change your mind about things.

UFC fighter Dennis Bermudez is known as “The Menace,” and while that’s a play off the old cartoon/TV show, he truly is a menace in the cage. He’s also a bit insane outside of the fight. Watch as he takes a tase to the spine, apparently just to do it.

Tae Hyun Bang is a name probably unfamiliar to the casual MMA fan. He went 2-3 in the UFC and was never in any big-name fights. The Korea Herald reported that Bang was to receive $87K to lose his UFC Fight Night fight to Leo Kuntz, whom he was to bet $43K on.

UFC officials became aware of the situation after an inordinately large wager was placed on Kuntz, a rarity for such a non-descript fight. The UFC warned Bang not to throw the fight and he proceeded to win by split decision. South Korean prosecutors still indicted Bang, as well as others involved in the scam. He will soon face trial, and it will be interesting to hear his defense as to why he agreed to take the bribe in the first place. It would have been a nice payday, but nothing to retire on.

Garbrandt vs. Dillashaw Official For UFC 217

Cody Garbrandt will defend his UFC bantamweight title at UFC 217 against former champion T.J. Dillashaw. The two were supposed to meet after they coached against each other on the last season of The Ultimate Fighter, but Garbrandt suffered an injury and the fight was postponed.

That event will also feature the return of Georges St-Pierre as he challenges UFC middleweight champion Michael Bisping for the title, as well as an exciting matchup between former title challenger Stephen “Wonderboy” Thompson and Jorge Masvidal. That will all go down on Nov. 4.

UFC Hall of Famer Matt Hughes was severely injured after his vehicle was struck by a train in June. He was in a coma and put on a ventilator, but some good news about his recovery was revealed this week on social media from a long-time friend.

Hughes was the most dominant welterweight on the planet for many years with two different reigns as the UFC champ. He won and defended his title seven times, and he beat legends like BJ Penn and GSP.

As usual, Demetrious “Mighty Mouse” Johnson is taking the backseat to the big MayMac fight, GSP’s return and the UFC 217 fight announcements. But the best pound-for-pound fighter in MMA is likely to set a major record at UFC 215 when he takes on challenger Ray Borg.

Johnson — a massive favorite in the fight — will break the record for consecutive title defenses with a win, making it his 11th straight title defense. UFC 215 is the next pay-per-view and will be held on Sep. 9 in Canada. Also on the card, UFC women’s bantamweight champ Amanda Nunes will defend her title against Valentina Shevchenko, and former UFC heavyweight champion Junior dos Santos will fight Francis Ngannou.