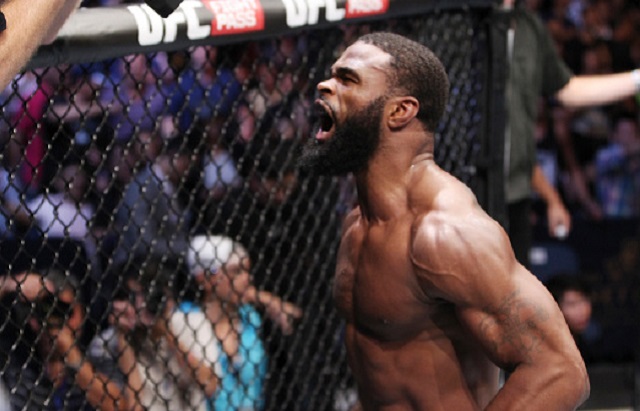 The MMA Ten keeps you updated on the latest news from the world of the UFC and beyond. This week: Talking trash with Dominick Cruz and Cody Garbrandt, UFC fighter uses the chronic for chronic pain, Conor McGregor almost “brings the Ferguson” out of Tyron Woodley and more!

Cruz vs. Garbrandt: The Uncensored Version

Dominick Cruz will defend his UFC bantamweight title against Cody Garbrandt at UFC 207, and the two hooked up for some interesting banter during last weekend’s UFC on FOX broadcast. Much of the audio was muted during the live broadcast because of a few of Garbrandt’s word choices, but the UFC released the full video this week. Garbrandt tried to be slick in making a p***y reference, and while it might have sounded good during his rehearsal in front of the mirror, it came out as nonsense on TV.

Cain Velasquez will also fight at UFC 207, taking on Fabricio Werdum in a rematch of their title fight from 2015. Werdum took the title from Velasquez that night and the oft-injured Velasquez wants his revenge. But his balky back is back at it, and he will have surgery after the Werdum fight.

ESPN’s Brett Okamoto reports that Velasquez turned to CBD, aka Cannabidiol, for pain relief throughout his training camp. CBD is not among the many substances banned for UFC fighters during out-of-competition testing, and it is one of the many cannabinoids found in marijuana. It has a wide array of medical uses, including treatment for epilepsy and pain relief.

“It’s the only thing that allows me to still train, and I’m not taking a harmful painkiller into my body that I’ll later become addicted to,” Velasquez told ESPN. “I don’t know how everyone is going to feel about me saying this, but this is just one of the hard facts we as fighters have to go through. In the past, in the NFL, players have gotten addicted to painkillers. I don’t want to be an addict of some sort.”

I find it rather insane that it’s perfectly acceptable to obtain prescriptions for life-ruining, addictive pain meds, but a hit or two of weed is still illegal in some places. Think of all the destruction done by prescription meds — haven’t these people seen House? Good for Velasquez in making a smart choice to manage his pain.

Man, with all this angst in the first few items of the MMA Ten, I thought we ncould use a quick breather. So let’s go to former UFC bantamweight champ Holly Holm as she sings a little Christmas song for everyone. It’s cute, it’s awkward, and much like Chocolat, it’s just delightful.

I hope everyone is enjoying their Week leading up to Christmas. I wish you all a Merry Christmas and I hope you are surrounded by loved ones making memories that will last a lifetime. And thank you Carolee Erickson Eldridge for being a great fan. I appreciate you as I do all of my fans and supporters. And thank you @hitechpharma 😉 🎄☃️❄️

Woodley Says Conor Almost “Brought That Ferguson” Out of Him

UFC welterweight champ Tyron Woodley expounds on the confrontation he had with Conor McGregor at UFC 205, when Conor got in his face.

“A few people can take you out of that element and bring that Ferguson back out of you and he almost did it.”

If McGregor thought Nate Diaz hit hard, wait until he tastes Woodley’s power. Is Woodley vs. McGregor a “superfight” to look forward to in 2017? The run-up would be amazing, but I think Woodley puts Conor to sleep in round one.

Cris Justino, better known as Cris Cyborg, is the most dominant, destructive fighter in MMA, and that includes the men’s divisions. But Cyborg’s biggest battle comes not in the cage, but with the scale. She has to cut an enormous amount of weight to make featherweight, which is 145lbs., and until recently, the UFC wanted her to fight at 140. Cyborg generally walks around at close to 175, meaning she usually needs to cut about 30 pounds to make weight. This video takes you behind the scenes for a frightening look at how she cuts weight during fight week.

Cyborg caught some flak for saying she wouldn’t be ready for the inaugural UFC women’s featherweight title fight at UFC 208, but if you watch the video above, it’s not hard to understand why she needs more time. The UFC offered her the fight, but when she declined, they chose not to wait for her. Instead, former bantamweight champ Holly Holm will fight Germaine de Randamie for the belt. Complicating the entire process, news came down yesterday that Cyborg was flagged by USADA for a possible doping violation, though she says it’s for Spironolactone, which was prescribed by her doctor. Stay tuned to see how that works out.

Having a young daughter, I love that the phrase “Fight like a girl” has a completely different connotation for her generation than it did mine. Case in point: Watch this female soldier put it on this male soldier in this Army Combatives competition.

Ronda Rousey makes her return to the cage at UFC 207 and will try to regain the UFC bantamweight title she held for so long. But she’s also mentioned that time is winding down on her MMA career. She’s had some fun in the WWE, both as a spectator and briefly as a participant at Wrestlemania in 2015. WWE’s Stephanie McMahon told USA Today they would love to have Ronda in the WWE when she hangs up the 4oz. gloves.

“Our fans love Ronda. Ronda has this cross-platform appeal in terms of all forms of entertainment. We would welcome her with open arms. She is the total package,” McMahon said. “Muhammad Ali credited pro wrestling for where he got his trash talking skills and persona. I would like to think there is a bit of ‘Rowdy’ and wrestling history in Ronda and the way she carries herself, but she is definitely her own individual brand.”

Ronda could work the heel angle perfectly. But could she handle Charlotte’s Figure Eight? Make it happen, Triple H.

The Last Bisping Feud of the Year

UFC middleweight champion Michael Bisping had an amazing 2016, winning the title and taking all comers on social media. He beat Anderson Silva in the cage, then gave it to him again after Silva posted about their fight on Instagram this week.

1 – De onde veio esse soco? 2 – Chute na boca! De onde veio esse chute? 3 – Vou correr desse cara! Será que não vão dar a luta pra mim? 4 – Bateu um sono aqui, vou dar um cochilo e já volto, afinal, estou em casa! Good Save the Queen! Sempre bom lutar em casa… O dia que nocauteei e perdi por pontos. Na terra da rainha, não é diferente do Brasil, time da casa tem peso dobrado! God Save the Queen… ———— 1 – Where did this punch come from? 2 – Kick in the mouth! Where did it come from? 3 – I will run from this guy! I hope they’ll help me in this fight! 4 – I think I’m going to go to sleep and I’ll come back later, because I’m at home! It is always good to fight at home. God Save the Queen! The day I knocked someone out and ended up losing by points. In the Queen’s land it is no different from Brazil, fighting at home has its advantages! God save the Queen! A photo posted by Anderson Silva (@spiderandersonsilva) on Dec 18, 2016 at 9:18am PST

This is only in response to @spiderandersonsilva Your still whining on Instagram about the decision. Saying I ran the whole time and you knocked me out lol. First off, I backed you up the entire fight and dropped you twice, also I clearly out struck you the entire fight. You landed a cheap shot in the third which dropped me at the end of the round, not KO’d me lol. Man, your so used to everyone bowing down to you, your head is messed up. You lost! Deal with it. A true martial artist should have honour and respect in defeat as well as victory. Also they don’t take steroids, you sir are a fake!!!!!

Bisping will undoubtedly be named fighter of the year after beating two legends — Silva and Dan Henderson — and taking the title from Luke Rockhold.

Since this is the last MMA Ten of the year, we have a couple of year-end videos in this piece. The first one comes by way of The Score, who recently compiled a list of the most absurd, wild, and funny MMA moments of 2016. One moment that made the list involved UFC fighter Khalil Rountree and his mom.

There are soccer moms, football moms, and dance moms. But how about MMA moms? Perhaps Rountree’s mom was distracting him with her cheering and encouragement, so he told her to shut up. From the cage. While getting punched.

Bellator doesn’t get half the publicity that the UFC does, but they put on a ton of great fights. They have some excellent young talent, as well as some well-known veterans like Michael Chandler, Tito Ortiz, Chael Sonnen, Rory MacDonald, and Benson Henderson.

Bellator has indeed become a free agent destination for fighters looking to move on from the UFC, with several fighters already making the move. With that said, check out the Best of Bellator in 2016.