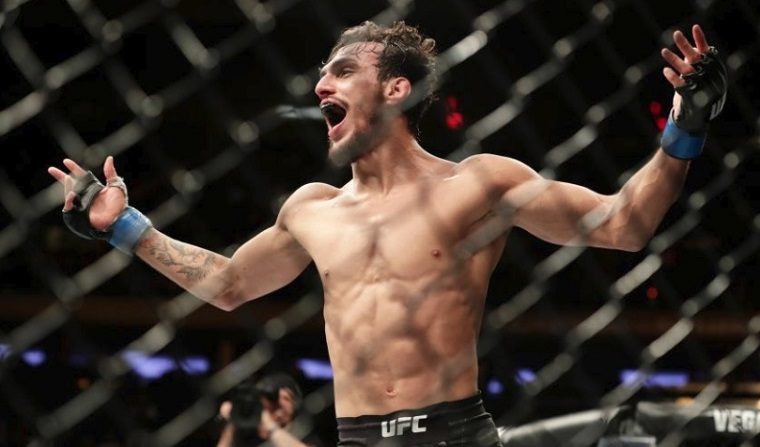 This week: Fighter dies in the cage — twice (!), UFC 217 fallout, this week in devastating knockouts and much more!

UFC 217 brought the heat with three title fights. It then made its way into the history books when all three changed hands.

TJ Dillashaw scored an amazing TKO win over Cody Garbrandt to reclaim the bantamweight title he lost last year. “Thug” Rose Namajunas gave champion Joanna Jedrzejczyk some of her own medicine with some pinpoint striking that felled the champ. Namajunas threw a barrage of strikes at the end that made Joanna tap, although the fight was stopped just seconds before she surrendered. And four years away from the cage didn’t matter much to Georges St-Pierre. He went in and shut down Michael Bisping, finishing him with a rear-naked choke. Bisping chose not to tap and went to sleep.

With all the changes, we thought we’d update you on who holds the title in each UFC division, as well as who the top contenders are.

The next title fight was supposed to be Max Holloway vs. Frankie Edgar at UFC 218, but Edgar recently withdrew due to injury.

If At First You Don’t Land the Spinning Back Elbow…

UFC 217 was an amazing event, and not just because we saw three titles change hands. There were a number of amazing finishes on the prelim card, including this gem from Ricardo Ramos.

OHHHHH!!!!@RicardoRamosMMA lands the spinning back elbow on the 2nd try and puts Zahabi OUT!! WOW!! #UFC217 pic.twitter.com/AhxEz4Fhon

GSP was back but so was OSP at UFC 217. Ovince Saint Preux’s layoff was a bit less than GSP’s, with the former Tennessee Volunteer taking a fight with Corey Anderson just over a month since his win over Yushin Okami. GSP had a spectacular finish of Michael Bisping, but we think this head kick KO was even better.

OSP climbed the fence to say hello to light heavyweight champion Daniel Cormier and probably tell him he’s coming for a title shot. There’s still some work to be done before OSP gets that shot, but the win over Anderson was his third straight.

We told you a few weeks ago that former Panthers and Cowboys defensive end Greg Hardy was gearing up to make his MMA debut. He didn’t waste any time when he got in the cage.

A lot of the comments about Hardy and his quest to be an MMA fighter are vile, and that’s to be expected. But for someone with Hardy’s past, MMA is the perfect choice to use as a vehicle for rehabilitation. He’s even noted how he’s humbled every day when he trains with stronger, more experienced fighters. Nothing will make you feel more helpless than getting choked and having to tap out.

I’m not saying Hardy won’t be a recidivist, but I am saying he’s a more understanding and humble person now than a year ago. Martial arts does that for everyone. I get it if you want to throw away Greg Hardy. He committed a heinous act. But he’s a free man and one with a violence problem. Training MMA every day is the perfect place for him.

Former Ohio State wrestler Tywan Claxton went 7-0 as an amateur MMA fighter. He got his first taste of the pro game at Bellator 186, going out and delivering one of the best debuts ever.

He changed his Twitter handle to Air Claxton and started selling shirts.

Fighter Dies In the Cage — Twice

Cutting mass amounts of weight in a short period of time is one of the worst things you can do to your body. CJ Hancock said he usually walks around at about 215 lbs., but recently fought as a welterweight in the LFA. The weight limit for that division is 170 lbs., and you are allowed a one-pound allowance, which Hancock used as he weighed in at 171.

Hancock fought on Nov. 4 and it did not go well. The camera does not catch the kick that eventually drops Hancock, but you can see he is in danger as he hits the canvas.

His fighting career may be over, but at least he is still alive.

“When you start tattooing your neck…you don’t give a s**t anymore.” – Dana White

Dana White and GQ had some fun recently as they showed the UFC president pictures of tattoos and quizzed him to see if he could guess the fighter with the tats. Hilarity ensues.

The UFC is in Norfolk for UFC Fight Night 120: Poirier vs. Pettis and the first fight of the evening has been selected for the well-respected, world-renowned MMA Nickname Battle of the Week. That fight will feature Darren “The Dentist” Stewart against Karl “Baby K” Roberson. Stewart’s debut was turned into a no-contest when he and opponent Francimar Barroso accidentally clashed heads. They ran it back in March and Stewart took the first loss of his career with Barroso winning by unanimous decision.

You Comeback readers are smart, so you probably understand how Stewart got his nickname. He put it best before his fight with Barroso. “He’s just another patient who’s gonna get drilled.”

As for Roberson, a deep web search (first page of Google results and reading a few stories) did not reveal the origin of Roberson’s “Baby K” nickname, but for a 6’1″ 205 lb. cage fighter I have to assume it’s in reference to his boyish looks. Roberson is all man in the cage though, and he needed just 15 seconds to elbow his way to victory this summer on Dana White’s Tuesday Night Contender Series.