This week: Boxing legend says boxer will win boxing fight, UFC fighters bust out some moves at a Mavs game, Tony Ferguson goes trolling hard, and a fighter freaks out big after referee error. Let’s start by watching a robbery.

Jorge Patino keeps fighting at age 43, and he’s fought in big-name promotions like the UFC and WSOF. You’d think that he’s probably seen it all in almost 60 pro fights, but then something completely strange happened in his last fight. There is profanity in this video, so headphones if you’re at work or just crank it if you don’t like your job.

Who can blame Yousef Wehbe for being so angered? That “loss” killed a three-fight win streak, and it also cost him some money too. Fighters generally are paid show and win money, although that might not be the case here.

Even so, to work so hard to prepare for a fight and then get a loss for the mystery tap is beyond insane. And he scared the ring girls. No one wants to see that. Won’t someone please think about the ring girls? And the children?

TMZ bothered legendary boxer Sugar Ray Leonard to ask him about the potential Mayweather/McGregor matchup, and he answered their questions in an odd fashion. Dude just wanted to get in his car and drive home, watch a SportsCenter and hit the hay.

But when asked to predict the fight, Leonard says it will last just one round, and then spouts off some answers to questions that bordered on non-sequiturs.

Tony Ferguson may never get the opportunity to fight Khabib Nurmagomedov, but he is crushing him on social media. Nurmagomedov was a late scratch from their most recent matchup after a brutal weight cut left him physically unable to compete. Nurmagomedov was seen chowing down on a hearty meal and even some Tiramisu for dessert in one of the UFC hype videos, so Ferguson used that to take a jab on Twitter last week.

Fight fans joined in the fun:

I’d like to think that we will see those two fight at some point, but it just doesn’t seem like it’s in the cards.

T.J. Dillashaw is on a quest to get back the UFC bantamweight title and he’ll need to best hard-hitting Cody Garbrandt to do it. He recently sparred with Vasyl Lomachenko, who has just about broken the internet with his amazing highlight reels. “Hi-Tech” has been compared to Neo from The Matrix due to his amazing movement and ability to dodge punches, so Dillashaw made a wise move to train with him.

Hannibal Buress, the comedian from The Eric Andre Show and many other ventures, will be in the cage at Invicta FC 22 this weekend. It’s an all-female fight promotion, so Burress won’t be throwing hands, but he will be featured on Janaisa Morandin’s fight clothes.

That’s so amazing. Morandin is 9-0 and she’ll make her Invicta debut on Saturday. Here’s hoping she chooses the Chiquita Banana song for her walkout music.

Bellator Sets Up PPV with Sonnen vs. Silva, Fedor vs. Mitrione 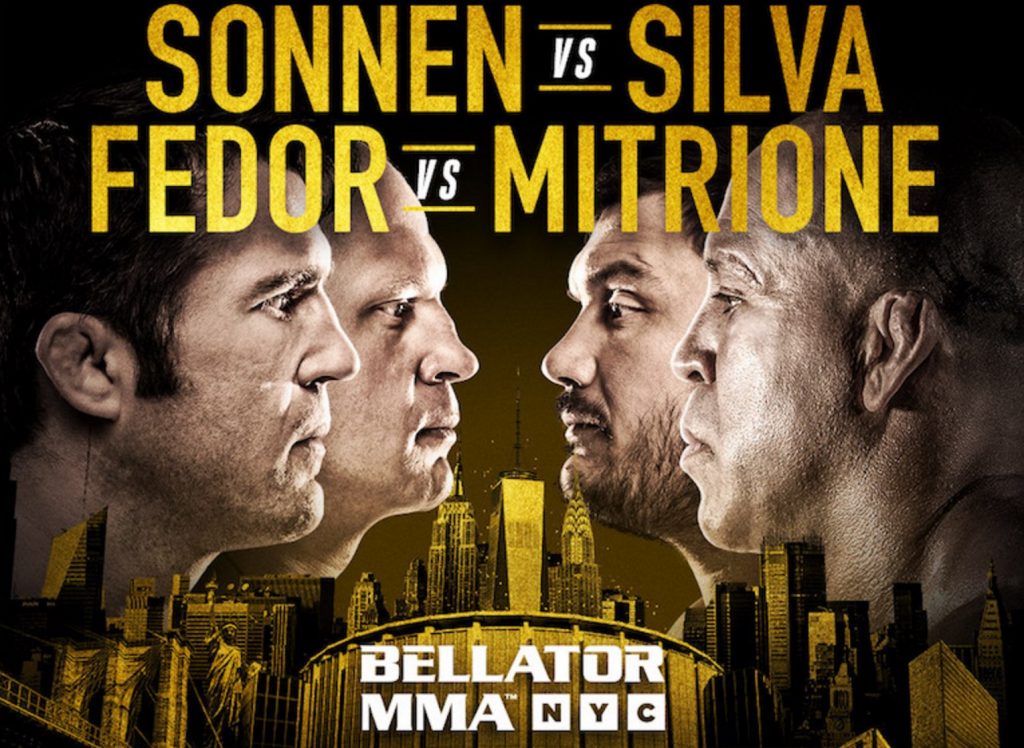 Bellator is taking another stab at pay-per-view with their upcoming Bellator 180 event, which features a main event between Chael Sonnen and Wanderlei “The Axe Murderer” Silva. They were supposed to fight many years ago in the UFC after the two served as coaches on The Ultimate Fighter, but the fight never went down.

They have also rescheduled the Fedor Emelianenko vs. Matt Mitrione fight for this event. In addition, there will be two title bouts on the card, with lightweight champion Michael Chandler taking on Brett Primus, and UFC defector Lorenz Larkin fighting for the welterweight title in his Bellator debut against Douglas Lima. The event will be the New York debut for the promotion and it will all go down on June 24 at MSG. This is likely the best card, at least on paper, that Bellator has ever had.

We told you last week that UFC Hall of Famer Matt Hughes was interested in a comeback fight, and he hinted that it might be with fellow hall of famer Royce Gracie. MMAFighting caught up with the legend and he said he’d be thrilled to run it back with Hughes, but this time it would take place in Bellator.

Well, I don’t know about everybody, as Gracie is now 50 and Hughes 43. But a lot of people will watch. And if the Bellator 180 pay-per-view is a success, you’d have to think that a Hughes vs. Gracie match would also take place on a PPV.

UFC heavyweight champion Stipe Miocic and Junior dos Santos broke out their best bodybuilding poses in front of a huge crowd at a recent Mavs game.

You have to give the win to dos Santos here. I think Miocic should have ripped off his shirt Hulk Hogan-style and threw it into the crowd. I think that would have won it for him, and I also just realized I’m really spending too much time thinking about this. So as Bryant Gumbel is wont to say, “Let’s move on.”

Nate Diaz Ain’t Having No Lip From Dana White

Nate Diaz disputes Dana White’s claim that he has been offered and turned down numerous fight proposals from the UFC. You know he’s serious about this because he showed his dismay on Twitter, complete with a middle-finger emoji.

This fucker can't stop making shit up about me and I haven't been offered any fights except the one Iaughed at ???? pic.twitter.com/7gRskEXEP9

Nate will be a draw no matter who he fights. The fans just love him and his brother Nick. They are entertaining inside the cage and the kings of all rock during the leadup to the fight. I hope to see both Diaz brothers do work again as soon as possible.

Your MMA Knockout of the Week

Marc Diakese completely wrecked Teemu Packalen with a vicious right-hand last week at UFC Fight Night, and if you missed the punch you might have thought there was a sniper in the building.